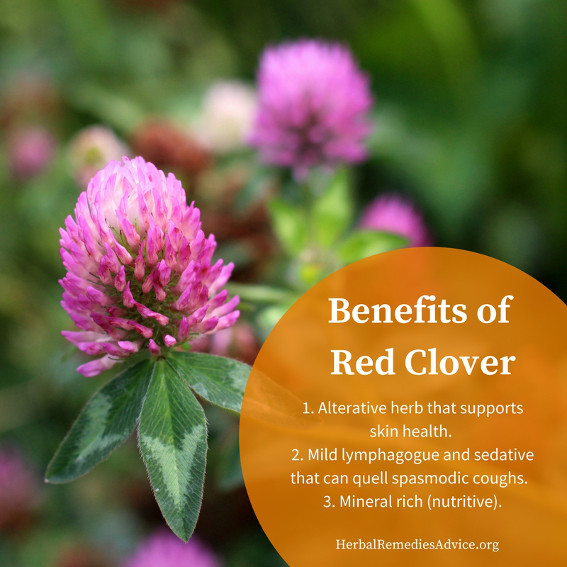 Red clover benefits are so numerous it has been a favorite herb of folk herbalists for many years, playing a prominent role in many Western herbal formulas, notably the Trifolium Compound of the Eclectic herbalists, the Hoxsey Formula, and Essiac. While it was traditionally used as an alterative and anti-cancer herb, in more recent years, red clover has made the headlines due to its isoflavone content.

Red Clover Benefits: as an Alterative

Alterative is an herbal action with far reaching definitions, ranging from “altering” a person towards health to more specific actions such as lymphatic movement or hepatic detoxification. Older herbal literature often describes “bad blood” as an indication for alterative herbs, with specific afflictions being skin diseases such as eczema and psoriasis, chronic inflammation, chronic infections, skin ulcers, and glandular swellings. Modern day herbalists often believe the term “bad blood” refers to poor lymphatic movement or cloudy extracellular material rather than the actual blood being bad.

I define alteratives as herbs that help the body eliminate metabolic wastes. Our bodies naturally perform elimination actions every day and alterative herbs can further assist in that process.

Red clover is commonly used as an alterative herb to support skin health, both through internal and external use, and is also considered a mild lymphatic. Herbalists use it for a variety of skin ailments, from eczema to psoriasis to acne. It was historically used for scrofula, a disease of lymphatic swellings related to a form of tuberculosis. It is commonly combined in formulas with other alterative herbs, such as dandelion, burdock, chickweed, and nettles.

In the past, red clover was frequently used as an anti-cancer herb. It plays a prominent role in several famous anti-cancer remedies, including Essiac and the Hoxsey Formula. It was used topically as well as internally.

To date, I haven’t seen any case studies from herbalists regarding red clover in cancer and there have been no human clinical trials using whole red clover. There have been some promising studies using isolated chemical constituents (isoflavones) of red clover, including studies for breast cancer and prostate cancer.1,2 I would love to see more human clinical trials using extracts of whole red clover herb rather than isolated constituents.

Also, in regards to historical use of red clover for cancer, Michael Moore reminds us in his book Medicinal Plants of the Mountain West that “The definition of ‘cancer’ back then was any necrotic sore that healed slowly and derived from below the surface.”

Other studies have shown that extracts of red clover are safe for women with a history of breast cancer and that taking red clover extracts does not increase breast density.3,4 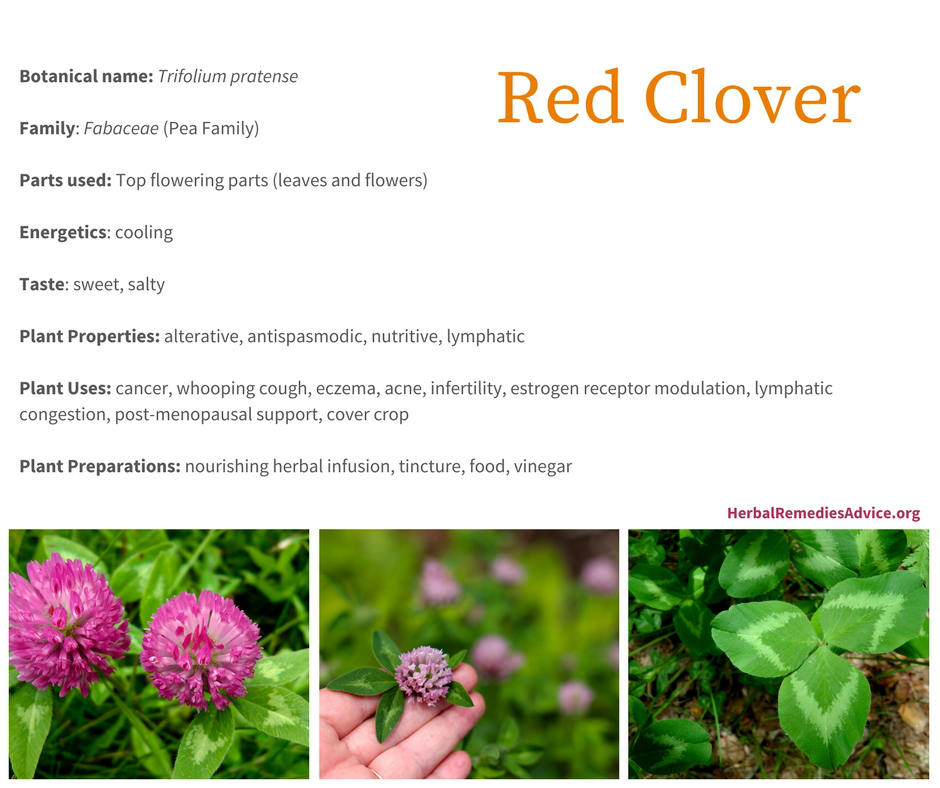 Red Clover Benefits: as a Phytoestrogen

Red clover is a favorite herb for women experiencing hot flashes and other hormonal changes throughout menopause, including vaginal dryness and osteoporosis. Numerous studies have shown extracts of red clover to be safe and effective for hot flashes in particular.5,6,7 Again, I would love to see human clinical trials performed using the whole herb rather than isolated extracts.

Folk herbalists regularly recommend red clover for many hormonal imbalances for women, including infertility and PMS symptoms like sore breasts.

However, according to the AHP Monograph on Red Clover, “There is no in vivo evidence to suggest that red clover specifically, or phytoestrogen supplementation generally, increases cancer risk in humans. In contrast, there is a plethora of data demonstrating cancer-preventive effects of phytoestrogens overall.

Red Clover Benefits: as a Nutritive

Red clover contains many phytonutrients, vitamins, and minerals, including genistein, diadzen, formononetin, potassium, iron, magnesium, calcium, and manganese.8 The flowers taste fresh and sweet and can be added to salads or dipped in a batter and fried as fritters. Making a vinegar extraction or a nourishing infusion is another way to enjoy the nutrient benefits of red clover.

Red clover is a mildly antispasmodic herb that was historically used for whooping cough. While many Eclectic herbalists mention red clover for addressing dry spasmodic coughs, some caution that it doesn’t work as often as it does.

When using red clover for dry spasmodic coughs, I recommend combining it with other moistening herbs like marshmallow root, plantain, licorice, or violet.

In earlier editions of this work it was stated that "a strong infusion of the plant is said to afford prompt relief in whooping-cough, suspending the spasmodic cough entirely in 2 or 3 days; it is to be given in 1/2 fluid ounce, every 1 or 2 hours, throughout the day." Since then the remedy has come into extensive use, but the statement should be modified, as it does not reach all classes of cases. When the proper case is found it acts promptly, but as yet the specific indications in this complaint have not been discovered.
- King’s American Dispensatory, 1898 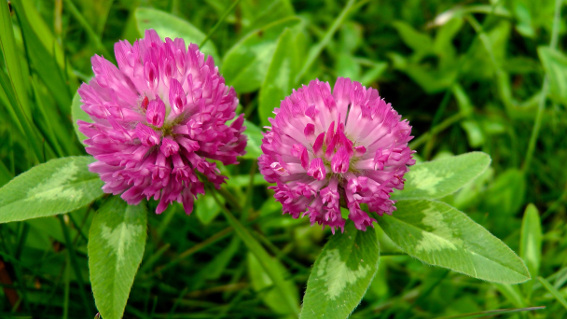 Can Other Clovers Be Used Similarly to Red Clover?

We don’t have historic or clinical evidence of other clovers (Trifolium spp.) being used in similar ways as red clover. There have been a couple of studies showing there is a significant difference in the individual chemical constituents of various clovers, meaning that other types of clover probably do not substitute for the actions of red clover.10

Red clover is a nutrient-dense herb that is best extracted with water. It is often used as a nourishing herbal infusion, using 1 ounce of dry herb infused in a quart of just-boiled water.

There is a lot of poor quality red clover on the market. If possible, harvest and dry your own to get the best quality. Because it can mold quickly, I recommend harvesting it at its peak and drying it in a single layer. If you live in a humid environment then a dehydrator may be the best drying method. If you purchase red clover, make sure you get freshly dried tops that have vibrant color.

Much of the commercial red clover on the market consists of inflorescences that are more brown in color than red, indicating suboptimal harvest, handling, drying or storage conditions.
- AHP Red Clover Monograph

Herbalists traditionally use red clover blossoms and the upper leaves. 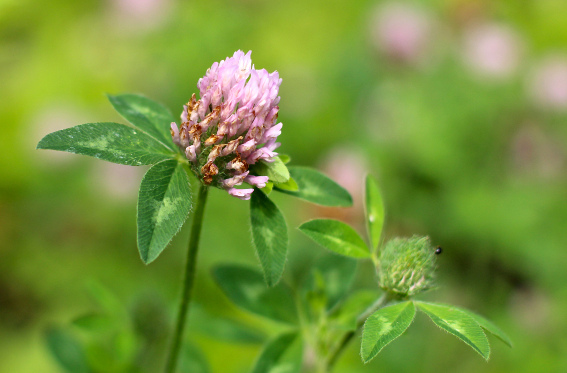 There is a growing interest in using extracted isoflavones from pea family plants like red clover and soy. Studies have shown there is a significant variation in isoflavones in these products.11

Various Trifolium species are commonly used as cover crops on farms and in gardens. As a member of the pea family it fixes nitrogen in the soil, can break up heavy clay soils, and provides organic biomass that can be plowed in to improve the soil. If you’re a gardener, consider growing a rotating row of red clover in your garden and harvesting the flowers before digging the plant back into the earth. 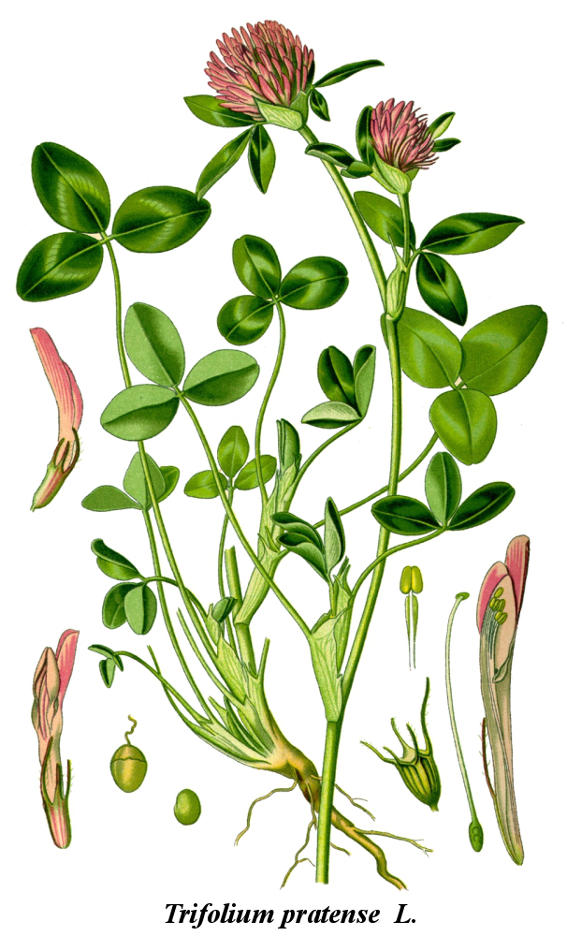 Red clover, Trifolium pratense, is a member of the pea family. It is native to Europe and North Africa, but has become naturalized in many places across the globe, including North and South America.

It is an herbaceous plant that can grow as an annual or a short-lived perennial.

Red clover grows 1-2 feet in height from a central crown. It can be harvested to several inches from the ground and then re-harvested later in the season.

The leaves have three parts (trifoliate) and have a lightly colored crescent or chevron on each leaflet.

The flower heads are light pink to purple in color and contain the familiar flower parts of the Fabaceae, including the banner, wings and keel. The flowers are grouped together in a dense head (inflorescence) and are mostly visited by native bumblebees.

The root is a single taproot that is not traditionally used in herbal medicine.