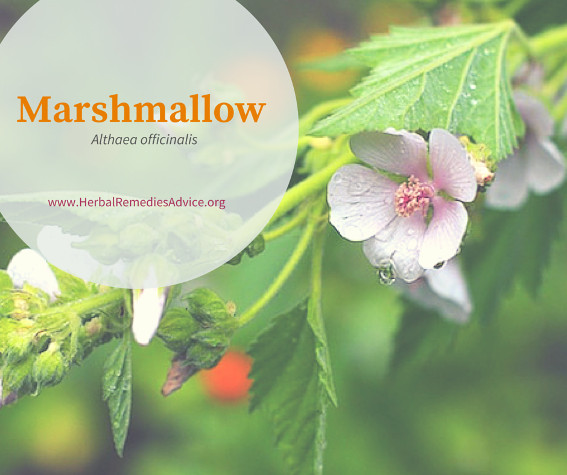 Whosoever shall take a spoonful of the Mallows shall that day be free from all diseases that may come to him.
- Pliny

I love single herbs that seemingly do everything.

Their complexity could inspire a lifetime of devotion to learning the intricate ways they could be used for food and medicine, as well as the ways they support their habitat and the gifts they bring the earth. Single herbs that can be used in a variety of ways are called "polycrest herbs." And the marshmallow herb is certainly a polycrest.

Marshmallow is known primarily as a demulcent that is specific to the mucous membrane tissues. Because of its thick and slimy brew you can easily imagine that it is used to soothe and coat irritated tissues. Mouth ulcers, sore throats, peptic ulcers, and inflamed intestines all get relief from this gooey brew.

Marshmallow herb works in complex ways. It can even be used as a lubricating demulcent for the lungs and for the urinary tract, even though it never comes in direct contact with these surfaces. Herbalist jim mcdonald explains:

Though it makes sense that demulcents coat tissues, the physical mucilage is actually very poorly absorbed by the body, and certainly isn’t traveling through the blood to the kidneys. Rather, the ingestion of mucilage seems to promote a systemic moistening of tissues throughout the body, with some demulcents being more specific to particular organ systems.

According to a survey published by Paul Bergner, marshmallow is one of the top 20 herbs used by herbalists in the US.

Like many of the herbs still in use today, marshmallow has a long history of use, going back at least 2,000 years, though most probably even more than this. Most herbalists use marshmallow root for medicine today, but the leaves and flowers are also very viable.

The genus name for marshmallow herb is derived from the Greek word altho, which means to cure. This gives us a great indication of how highly regarded this plant was in ancient times.

Herbalist Nicholas Culpeper relates this story about a mallow’s ability to heal:

"You may remember that not long since there was a raging disease called the bloody flux; the College of Physicians not knowing what to make of it, called it The Plague in the Guts, for their wits were at ne plus ultra about it. My son was taken with the same disease; myself being in the country, was sent for; the only thing I gave him was Mallow bruised and boiled both in milk and drink; in two days it cured him, and I have here to shew my thankfulness to God in communicating it to his creatures, leaving it to posterity."

Marshmallow herb is an amazing topical treatment for wounds and burns. In the past it was called mortification root because of its ability to prevent gangrene.

Externally, marshmallow root is very useful in the form of poultice, to discuss painful, inflammatory tumors, and swellings of every kind, whether the consequence of wounds, bruises, burns, scalds, or poisons; and has, when thus applied, had a happy effect in preventing the occurrence of gangrene. The infusion or decoction may be freely administered.
- King’s American Dispensary, 1898

Besides the roots, marshmallow leaves are also used as a fomentation to soothe rashes and other irritations of the skin.

Marshmallow and other members of the Malvaceae family were historically eaten as foods. Marshmallow roots are especially high in nutrients, and the young leaves and flowers are quite tasty in salads.

Marshmallow root can be used similarly to slippery elm for people who are weak and unable to eat many foods.

In pulmonary consumption and other wasting diseases it is one of the finest strengthening medicines to which employment can be given; possessing so much nutriment that it may with propriety, with the addition of milk, be taken as a food agreeing with and remaining in the stomach when that organ has become intolerant of other foods.
- Hatfield Botanic Pharmacopoeia, 1886

In Traditional Chinese Medicine marshmallow root is considered a yin tonic. It can be used for signs of deficient heat such as hot flashes, five palm heat and  night sweats. 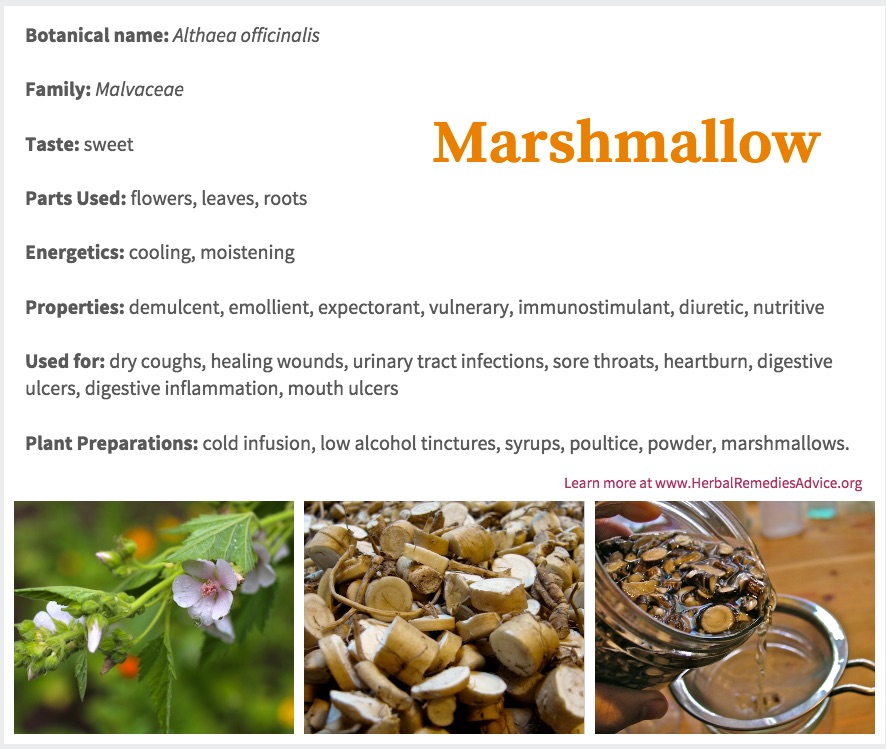 Marshmallow herb frequently gets used for urinary problems such as cystitis, kidney stones, and UTIs. Besides being a demulcent specific to the urinary tract it is also a diuretic, which can be of further aide in many urinary problems.

Marshmallow Herb for the Cold and Flu Season

Marshmallow herb is a wonderful plant for the cold and flu season. It can soothe an inflamed and sore throat. It stimulates phagocytosis, an important part of the immune system and it’s even used to moisten the lungs in the case of dry hot conditions, such as hot coughs with little to no expectoration. Recent scientific research has shown it to be a powerful anti-tussive herb as well. 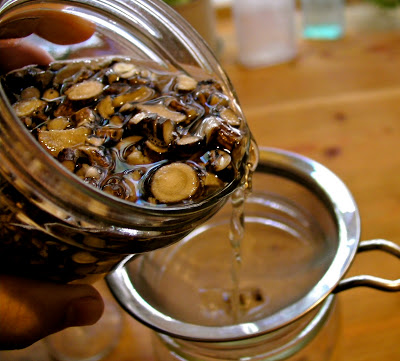 From a chemical constituents perspective, marshmallow root is best used as a cold infusion.
To see a step by step article on making cold infusions with marshmallow check out the free HerbMentor Newsletter.

Alcohol above 20% percent will break down the polysaccharides. Some herbalists make a decoction of the root and then preserve it with 20% alcohol.

Marshmallow root can be drunk as a tea, used externally as a wash, added to other tea blends, made into a syrup and used as a powder infused into water, honey, or ghee.

Marshmallow leaves and flowers can be made into a tea, syrup, or used as a fomentation.

Marshmallow is considered safe for everyone to use although it is recommended to take it hours after taking prescription medications as it may inhibit their absorption.

All parts of the plant can be infused into oil for use as a salve or ointment.

Marshmallow is in the Malvaceae family. This is derived from the Greek word malake, which means soft. Almost all members of this family are used in similar ways to marshmallow herb.

Members of the Malvacaeae family that you might be familiar with include:

Malva neglecta, or common mallow, can be used very similarly to marshmallow and it grows virtually all over the US.

Marshmallow herb originally comes to us from central Asia but has spread out from there. It natively grows in salt marshes and is an easy herb to grow in your garden.

Marshmallow grows to 3-5 feet in height. It’s a perennial herbaceous plant, meaning that it dies back in the fall and reappears in the spring.

Marshmallow flowers are pinkish to white and have five separate petals and many stamens. The stamens form a column around the pistil, giving it a distinct shape. 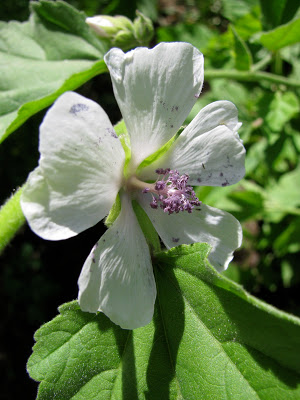 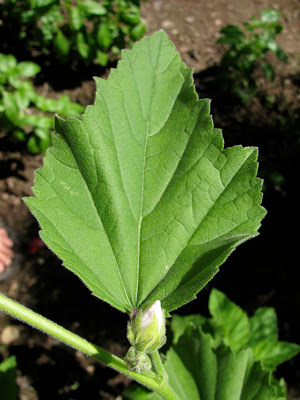 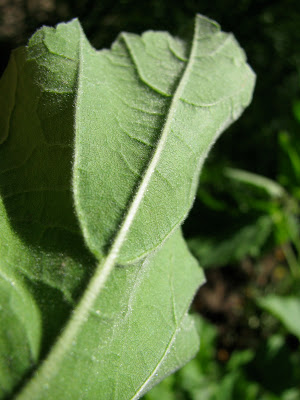 The leaves are shaped like hearts with irregular serrations and are covered with small soft hairs on both sides.

Marshmallow roots are a pale yellow color and are tapered, long, and thick.

Marshmallow roots are harvested in the fall from second or third year plants. They are chopped while still fresh and then dried.

Marshmallow herb is specific for many common ailments, yet has a complexity that renders it useful for a myriad of problems. I hope you enjoy learning about marshmallow and are able to create a variety of herbal remedies from this versatile plant for the enjoyment and well-being of you and your family.