The Benefits of Yellow Dock 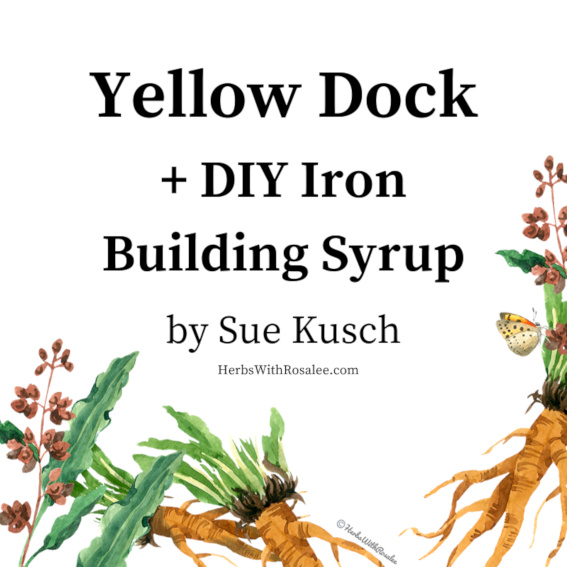 You may already know and appreciate yellow dock (Rumex crispus) without actually knowing its name and medicinal value. Perhaps you have admired it from afar in the dimmer light of autumn: rusty, red-brown seed heads that rise like spires along roadsides, fields, and farmlands.

Long before I knew the name and uses of yellow dock, I clipped a large dried rusty-red-brown seed head and tucked it into a rustic wall vase because of its form and color. Many years later, it is still on my wall, reminding me of the beautiful sunny autumn day in the mountains of central Idaho when I carefully placed it in my basket to take home.

Native to eastern Europe and western Asia, yellow dock (aka curly or curled dock), a perennial broad-leaf plant, has naturalized throughout North America. It is considered a noxious weed in some agricultural areas where cattle and sheep graze because its leaves contain oxalic acid that can be toxic to livestock when large amounts are ingested. A member of the buckwheat family, Polygonaceae, garden sorrel and rhubarb are two of its cousins. There over 200 species in the Rumex genus and they can be found on every continent, including Antarctica.

The species of docks and sorrels have a long history of use by humans. In the small city of Silkeborg, Denmark, a “bog body” was discovered in 1950. Well-preserved by his highly acidic grave, the contents of the 2300-year-old man’s stomach were analyzed, revealing a last meal of porridge made from plants including knotgrass, another cousin of yellow dock.1 In England, broad-leaf dock leaves were once used to wrap and protect butter.2

Small amounts of nutritious young leaves can be added to salad blends; older leaves are cooked and eaten like spinach. Because of the high levels of oxalic acid, large amounts of the leaves should not be eaten, especially by those with kidney disease. Youngish stems can be harvested and used in pies, offering the similar sour taste of rhubarb.3 In addition to being a beautiful dried seed head, the seeds are protein-rich and their abundance per plant (up to 40,000) makes them ideal for drying and grinding into flour or left whole and added to baked goods. I found an array of recipes when I did a search for dock seed recipes.

In Moerman’s book, Native American Ethnobotany, sixteen North American indigenous groups have incorporated this European native into their diets, eating the young greens and fresh seeds as well as making porridge with the seeds.

Wildcrafting yellow dock requires knowledge of the location since it often germinates in disturbed soil. In my area, I have access to an abundance of yellow dock but, unfortunately, it is all on land that has been recently clearcut and then repeatedly sprayed for weed control. Because it likes moisture, you will see it in roadside ditches that can accumulate toxic runoff from the road and may also be subject to herbicide spraying. My new motto these days is: know it or grow it! 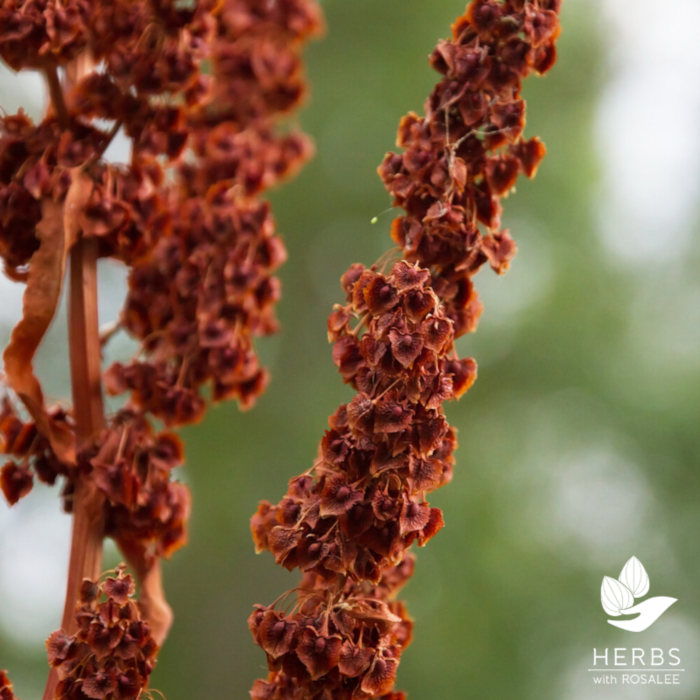 Yellow Dock as a Bitter Alterative

The long yellow taproot is bitter and is used both internally and externally. As a root, it is traditionally harvested in the fall, after it has gone to seed, cut into small pieces while fresh and then prepared as a tea, decoction, tincture, infused vinegar, poultice, a topical wash or mouth rinse, and a syrup. Once dried, it can be powdered for capsule use.

Yellow dock is used to treat a variety of skin complaints: infection, boils, tumors, ringworm, and hives. But it is best known as a bitter alterative that promotes healthy digestion, cools hot, inflamed conditions and “alters” a stagnant or congested liver.

Every now and then, we encounter an herb that performs seemingly opposite actions. Yellow dock is well-known as a remedy for constipation because it contains emodin, a substance that offers a mild stimulant effect on the colon.4 It is lesser-known as a remedy for diarrhea due to its astringent properties caused by the high levels of tannins. I love a good 2-for-1 bargain!

Yellow dock is regularly used as an herbal treatment for iron deficiency anemia. This common condition is caused by a low number of red blood cells, which are responsible for carrying oxygen throughout the body. Symptoms include feeling tired and shortness of breath. Causes include blood loss, iron deficient diets, and pregnancy.5

Yellow dock has high levels of iron and is a traditional remedy for pregnant women who may experience both anemia and constipation. The growing consensus among herbalists is that yellow dock may also help to release iron that is stored in the liver. Iron absorption is enhanced with Vitamin C so while researching recipes and herbs for an iron-building tonic syrup I created one that is rich in herbs that contain both iron and Vitamin C. 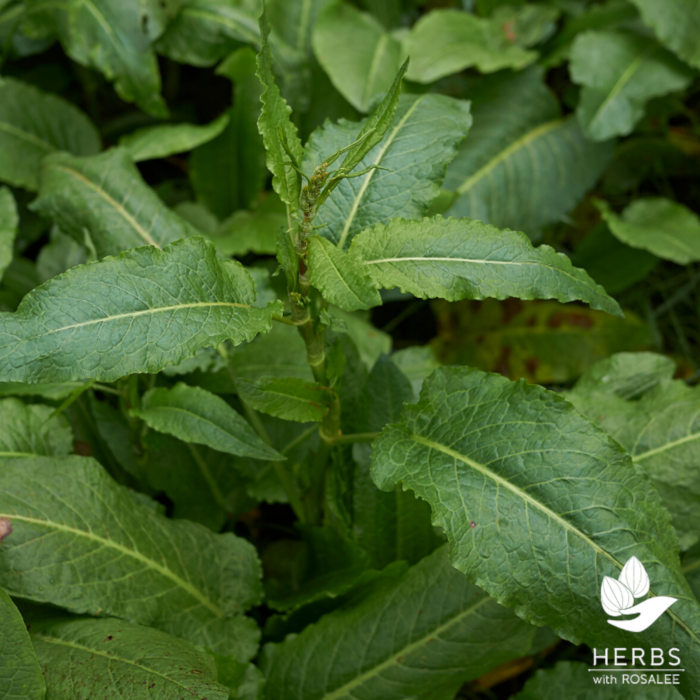 This tonic syrup is especially useful for women during their menstrual cycle, for women during pregnancy, people with low levels of iron due to diet, and for those times in our lives when we feel depleted. It is also beneficial for those who suffer with occasional constipation.

Add roots, berries, and spices to a large pot (do not add the leaves yet). Add 3 quarts of water to the pot and partially cover. Simmer for 2-3 hours until reduced by half.

Strain out herbs and taste. If desired, add honey to sweeten. Bottle and store in the refrigerator for up to a month. Take 2 teaspoons per day. This recipe makes one quart. Divide the batch and freeze in ice cube trays for future use. 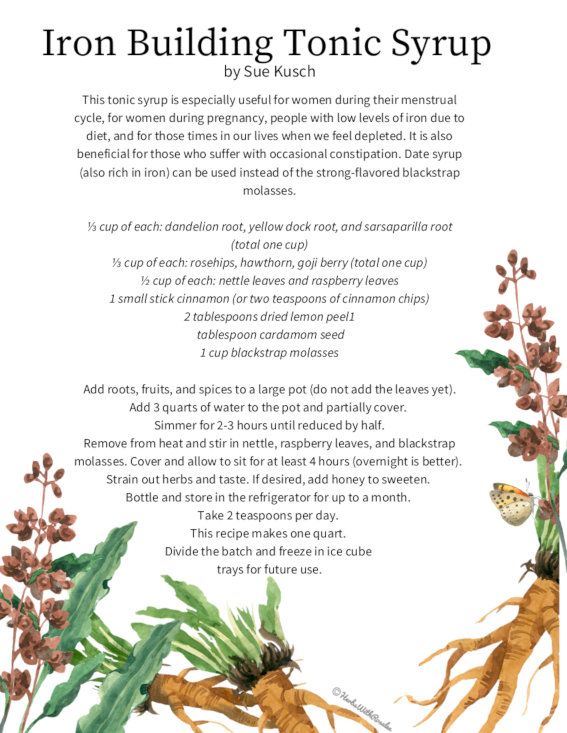