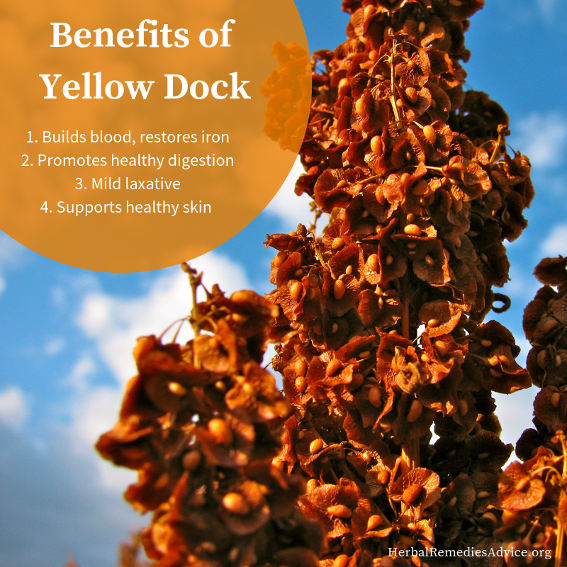 Curled dock goes by many names, including curly dock and yellow dock, and many closely related species of the Rumex genus are found around the globe. Herbalists use many of these species similarly, although the taste of the greens varies from species to species. Those with the yellowest roots are considered to be the best medicine.

Curled dock makes its presence known. In my valley, its small demulcent leaves are some of the first to unfurl as the snow melts, and as summer comes to an end, its large cluster of deep rust-colored seeds stands out in the landscape and lasts well into the winter. Could it be that curled dock is waving its plant hands at us? “Over here! Over here! I’ve got lots of food and medicine for you.”

Curled Dock as an Alterative and Bitter

Curled dock is a bitter alterative that can be used to gently stimulate the liver and help the body remove wastes. As a result, it is commonly used like many of our alterative bitters, to promote healthy digestion and to help clear hot inflamed skin conditions such as acne and eczema. While it is often recommended to be internally taken, herbalist Darcy Williamson also likes to use the root in a salve to soothe skin conditions.1 Herbalist David Winston notes that curled dock root has been used topically for mastitis, bedsores, and poison ivy.2

King’s American Dispensatory, an Eclectic herbalist text written in the late 19th century, recommends reaching for curled dock root when there is “epigastric fullness and pain, and aching or darting pain in the left chest, with flatulent distension of the stomach and eructations of gas.” 3

Curled dock root has been historically used to address tumors and cancer. It contains emodin, a constituent that has been shown to have beneficial effects in fighting cancer. 4

In a double blind, placebo controlled clinical trial, a cream made from Rumex occidentalis was shown to be safe and effective for reducing melasma (darkening skin) in Filipinos. 5

Curled dock has long been used by herbalists to build blood in people who have anemia due to an iron-deficient diet or excessive loss of blood. While curled dock does contain small amounts of iron, it is also believed that it helps the body to better absorb iron. A syrup made with curled dock root and blackstrap molasses is traditionally used to build blood, along with a recommendation for a diet high in vitamin C and iron. Curled dock root syrup is often used in pregnancy to help supplement the blood, while also relieving minor constipation associated with pregnancy. 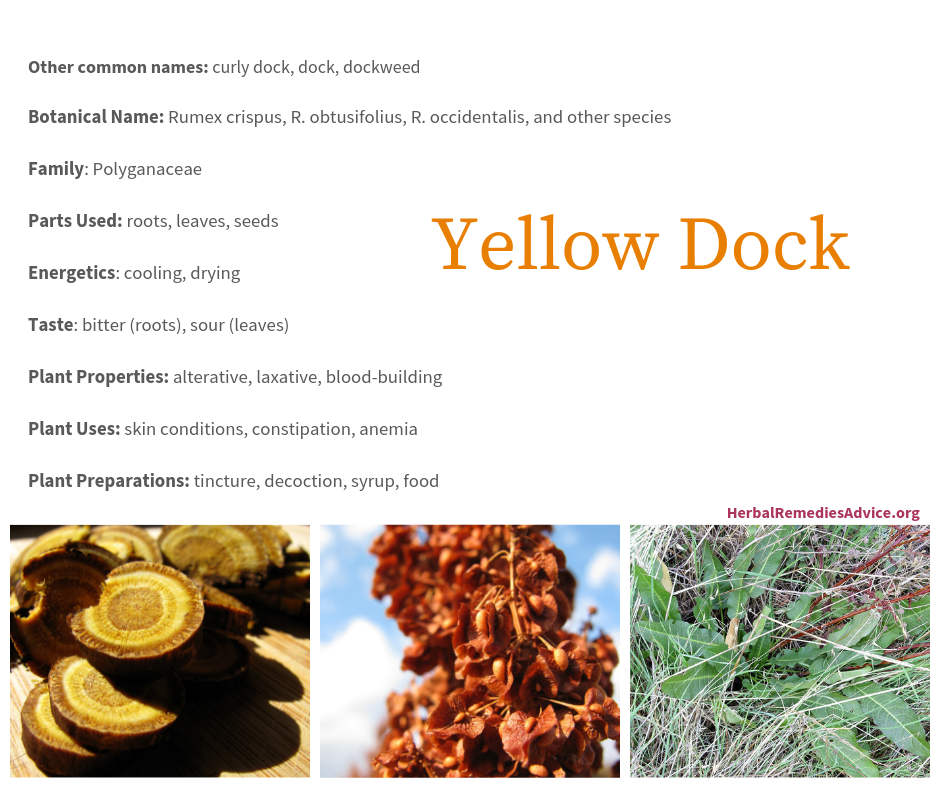 Curled dock is one of our best herbs for constipation. It’s gentle while being effective and is the perfect herb to reach for first, before using harsher herbal laxatives that often have uncomfortable side effects.

In The Wild Medicine Solution, Guido Masé recommends curled dock root as part of a withdrawal strategy for people who have become dependent on laxatives. He says that while a diet high in fiber and bitter greens is important for long term health, curled dock can help retrain the colon to function normally. Masé writes, “[Curled dock] is both safe and effective, and should be in pharmacies next to the stimulant and bulking remedies.”6

Curled dock is high in anthraquinones, which is one constituent to which herbalists attribute its gentle bowel loosening ways. It’s also astringent and can help tone the intestines. It was recommended for watery stools by Eclectic Herbalists.

Young dock leaves can be eaten as food. The young leaves may be coated in a mucilaginous substance that can be rinsed away before you prepare them. Because the sour leaves are high in oxalic acid, it’s recommended to eat only small amounts of the raw leaves. It's better to consume them cooked, which reduces the oxalic acid content. Older leaves become strong-tasting, tough, and unpalatable. The leaves are also commonly used as an in-the-field poultice to relieve the sting of fresh common stinging nettle (Urtica spp.) or spurge nettle (Cnidoscolus stimulosus).

The seeds are high in protein and can be ground and used as a flour. They are often combined with other flours to be made into cakes, crackers, or breads. Although sometimes recommended, it is not necessary to remove the papery sheath of the seeds before grinding or cooking them to eat. 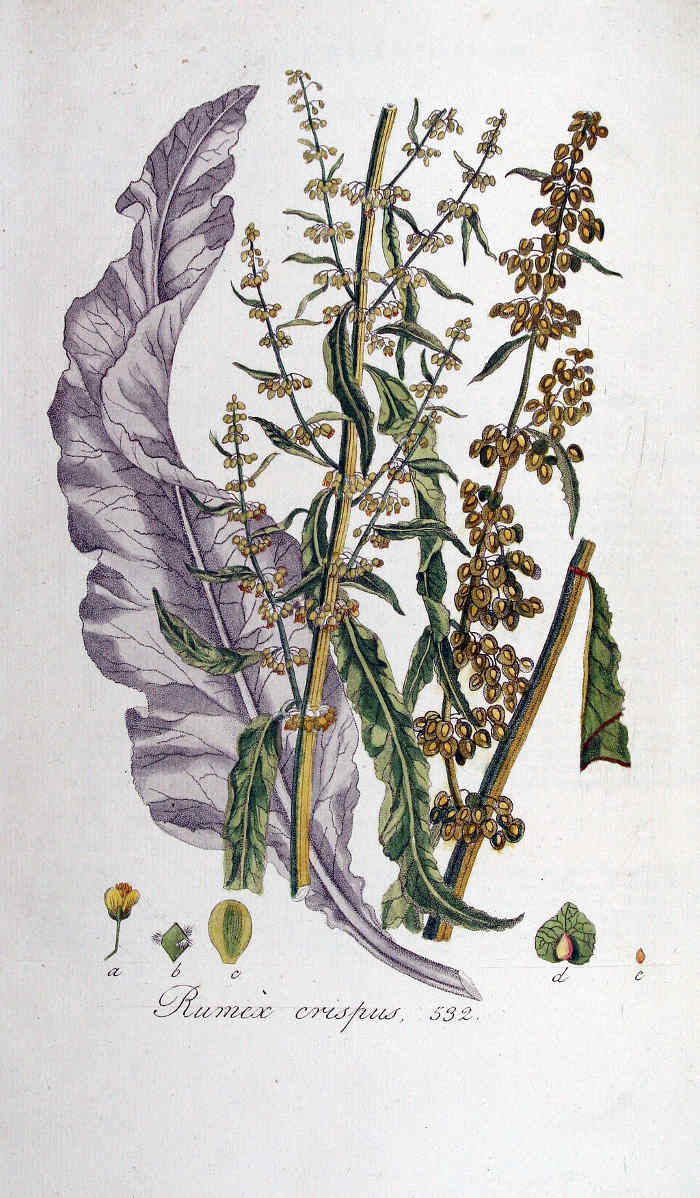 There are over 200 species of Rumex across the world. Many are used in a similar way, although the sorrels like Rumex acetosella (sheep’s sorrel) are used differently.

This botanical description section is specifically detailing Rumex crispus, which is a species native to eastern Europe/western Asia that has become naturalized (and in some places, invasive) throughout the temperate world. There also are Rumex species that are native to North America, so ask about how your local species might be medicinally used.

Curled dock is a perennial plant that grows freely in disturbed soils, including fields, vacant lots, streamsides, and forest edges. Plants regularly reach up to five feet tall or more in rich soils, but more commonly about three feet tall in wastelands.

Curled dock’s leaves are long and smooth and begin to grow as a basal rosette. The edges of the leaves are often wavy, curled, or crisped. The leaf buds form in the fall and lay waiting at the soil’s surface throughout winter, giving it the opportunity to leaf out in the later winter or early spring, depending on location. Botanists refer to plants with this ability as hemicryptophytes.

Leaves also appear along the flower stalk and grow in an alternate pattern.

The flower stalks have numerous nodes that resemble swollen joints, hence the Polygonaceae family name: poly = many and goni = joints.

The small flowers grow as a raceme along the top half of the stalk. Flowers are radially symmetrical with six petals and six sepals that are fused into a tube.

The abundant seed capsules – sources say as many as 40,000 per plant – are initially green and then become a deep rust color. The seeds are covered in a white outer coating as well as a papery sheath formed as a triangle. The seed capsules persist well into the winter.

The root is a long fleshy taproot that has distinct yellow rings when sliced. 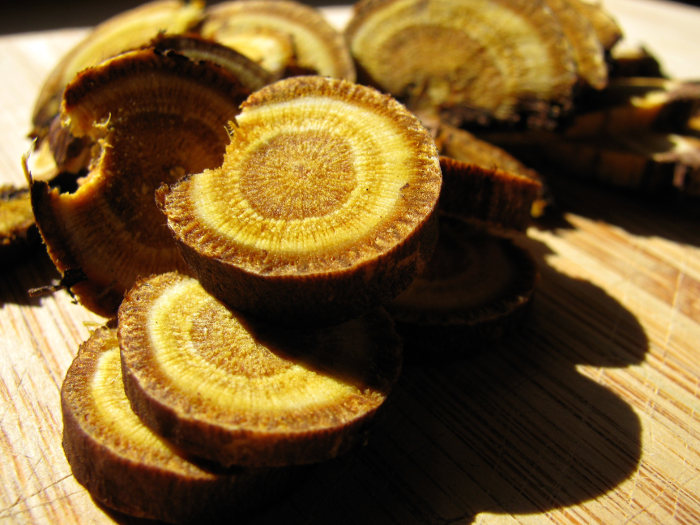 The fresh young leaves and mature seeds can be eaten as described above. The roots are used as medicine and are not used as food.

Harvest the roots once the plant has gone to seed and the seeds have fully matured. Use the roots fresh to simmer for syrup or extract into alcohol, or chop the roots finely and dry for later use.

To make a curled dock root syrup, simmer 1/2 cup of the chopped root in two cups of water. Simmer until reduced by half. Strain off the roots, measure the remaining liquid and add an equal portion of black strap molasses. Store in the refrigerator and consume within 3 months. Adults can take 1-3 tablespoons per day.

To make a curled dock root vinegar, add 1 cup dried root to a pint jar and cover with apple cider vinegar. Strain after a few weeks and enjoy to encourage absorption of iron from fresh salads and cooked greens.

1 Williamson, Darcey. 130 medicinal Plant Monographs of the Northwest. McCall, Idaho. From the Forest, 2011.

5 Mendoza, Clarisse G, Ivan A Singzon, and Evangeline B Handog. "A Randomized, Double-blind, Placebo-controlled Clinical Trial on the Efficacy and Safety of 3% Rumex Occidentalis Cream Versus 4% Hydroquinone Cream in the Treatment of Melasma Among Filipinos." International journal of dermatology 53, no. 11 (2014): doi:10.1111/ijd.12690.