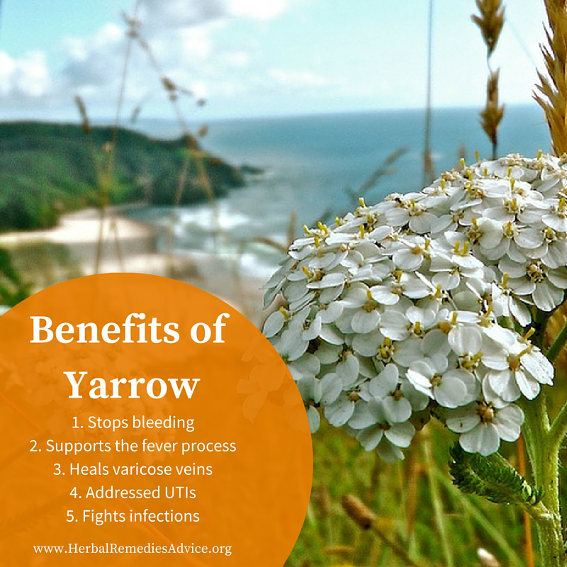 The yarrow plant must have a thousand virtues! It grows commonly all over the world and has been used as medicine by humans for tens of thousands of years. We know Neanderthals were using yarrow as long as 50,000 years ago.1

Yarrow is boldly aromatic and makes a powerful harmonizing medicine for a wide range of issues, including acute injuries as well as chronic health challenges. Some herbalists include yarrow on a short list of panacea herbs, meaning herbs that can address many different conditions.

Herbalists often look to a plant’s energetics to determine its usage. Cayenne is hot and stimulating while Astragalus is sweet and tonifying. Yarrow teaches us that herbs sometimes don’t fall into narrowly defined terms or classifications. It can be both cooling and warming. It can both stop bleeding as well as promote blood movement.

Herbalist Matt Wood writes that yarrow “is both cooling and warming, fluid generating and controlling. Remedies with contradictory but complementary properties are often of great utility since they are able to normalize opposing conditions. This is true for yarrow.”2

Yarrow is a commonly found plant with a complex array of uses. It is a plant that is well worth getting to know. 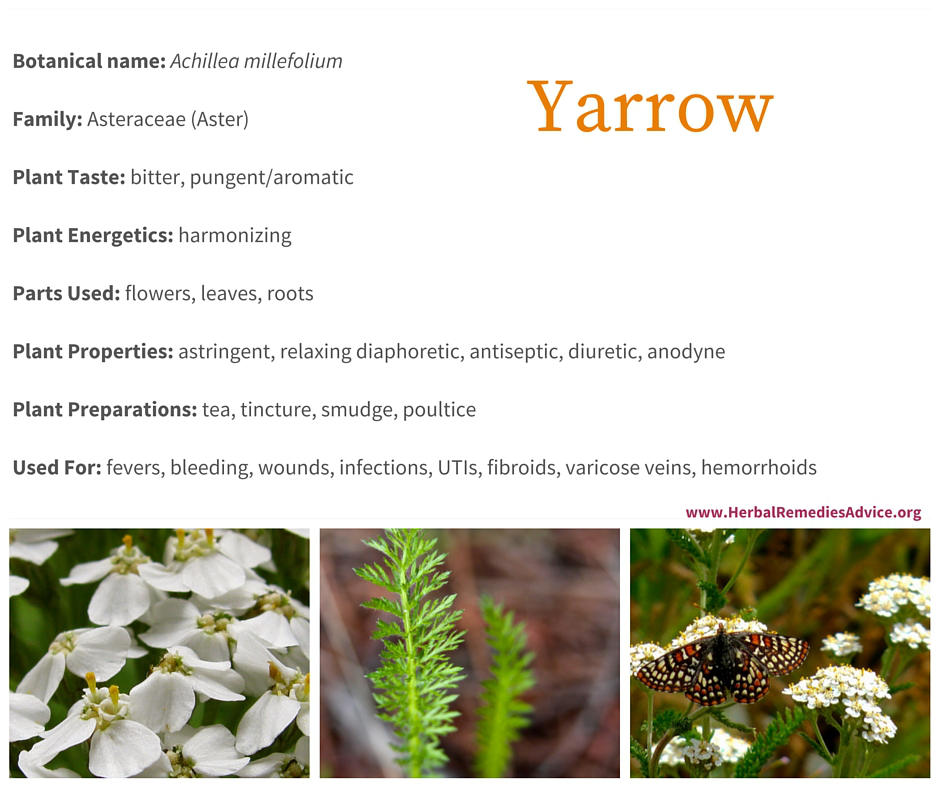 The Yarrow Plant for Wounds

For thousands of years yarrow has been used to heal wounds and stop bleeding. It has been called by many names over the centuries, including the descriptives spearwort, staunchweed, and woundwort. Yarrow offers a complete package that is well suited for healing injuries.

When used as a topical poultice, both fresh and dried, yarrow can encourage blood to coagulate, helping to stop bleeding. This is a helpful tip for hikers who may be far from medical care. I’ve seen it work in some dramatic circumstances. Using yarrow to stop bleeding can be as simple as macerating the leaves and applying them to the area. It’s famous for stopping nosebleeds.

Yarrow is broadly antimicrobial and antiseptic. When used on a wound it can help keep it clear of infection or it can be used to address signs of infection such as heat, redness, or yellow discharge.

Yarrow was famously used on Roman battlefields and has long been thought of as a soldier’s herb.

In the 1st Century, Dioscorides recommended to “pound the leaves and put them on a fresh wound to close and heal the wound, clear it from heat and inflammation and congeal the blood.”3

Recent studies have further confirmed yarrow’s gifts for healing wounds. One study showed that oil infused with yarrow was effective in reducing inflammation on the skin.4 Another study demonstrated that yarrow, in combination with St. John's Wort (Hypericum perforatum), increased the healing of episiotomy wounds.5


The Yarrow Plant for Harmonizing the Blood

While yarrow is famous for stopping external bleeding, it is also commonly used internally to move stagnant blood. Healthy blood is blood that is freely circulating around our body. Stagnant blood such as varicose veins, blood blisters, and even fibroids can lead to an array of symptoms and discomfort. Yarrow is often the herb of choice for relieving stagnant blood conditions.

“As a blood regulator, it helps clot when things need to be clotted, improves circulation and blood flow when needed, and also strengthens the lining of blood vessels and capillaries.”
- Maria Noel Groves, Body into Balance 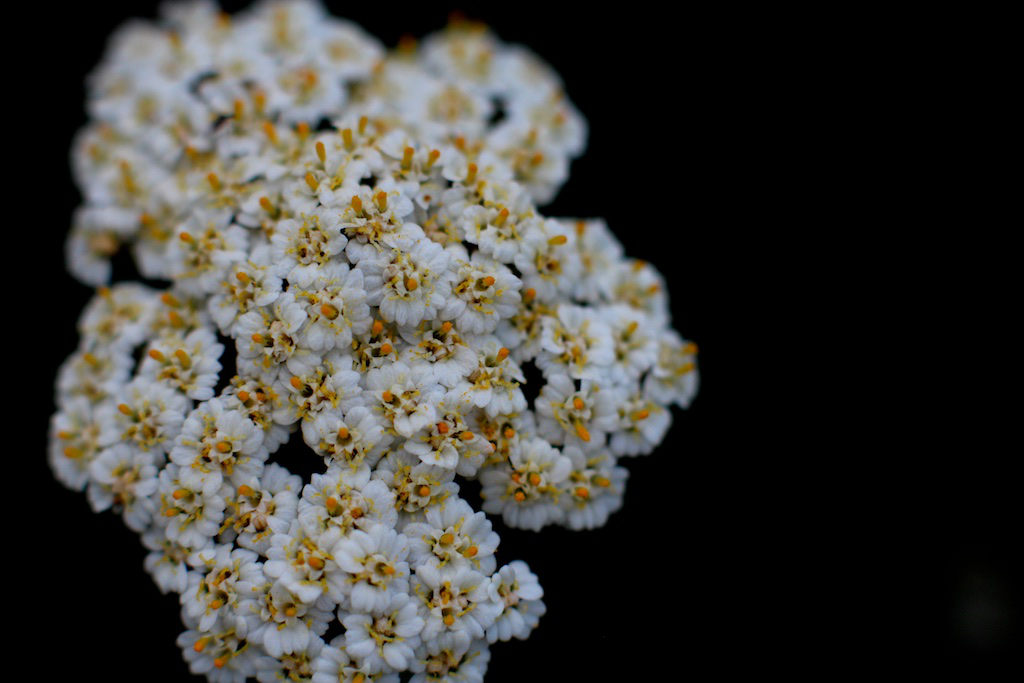 The Yarrow Plant for Cold and Influenza Symptoms

Yarrow offers relief for practically every symptom of the cold and flu: It can be used as a gargle or throat spray to soothe a sore throat.

Taken as a warm cup of tea it promotes circulation to the periphery and can cause profuse sweating, thus supporting the fever process. Because it does this so well, it is often considered a detox or cleansing herb and can be used to support skin health.

Eclectic herbalist Finley Ellingwood recommended a syrup of the leaves for a chronic cough accompanied by bloody sputum.6 Herbalist Jeremy Ross combines yarrow with Angelica (Angelica archangelica) for cold damp phlegm in the lungs and with Pleurisy root (Asclepius tuberosa) for fevers and bronchial phlegm.7

The Yarrow Plant for the Urinary System

Yarrow is one of my favorite herbs for addressing urinary tract infections. I often recommend it combined with uva ursi (Arctostaphylos uva-ursi) and a demulcent such as marshmallow root (Althaea officinalis). It’s a urinary astringent and antiseptic, helping to dispel the infection while toning the tissues. And, when taken lukewarm or cool, it acts as a diuretic, promoting healthy urination while tonifying tissues.

Eclectic herbalists used yarrow for a variety of urinary complaints, including irritation of the kidneys and urethra, suppression of urine, and “chronic diseases of the urinary apparatus.”8,9,10

One study has shown there are possible benefits of using yarrow for people with kidney disease.11 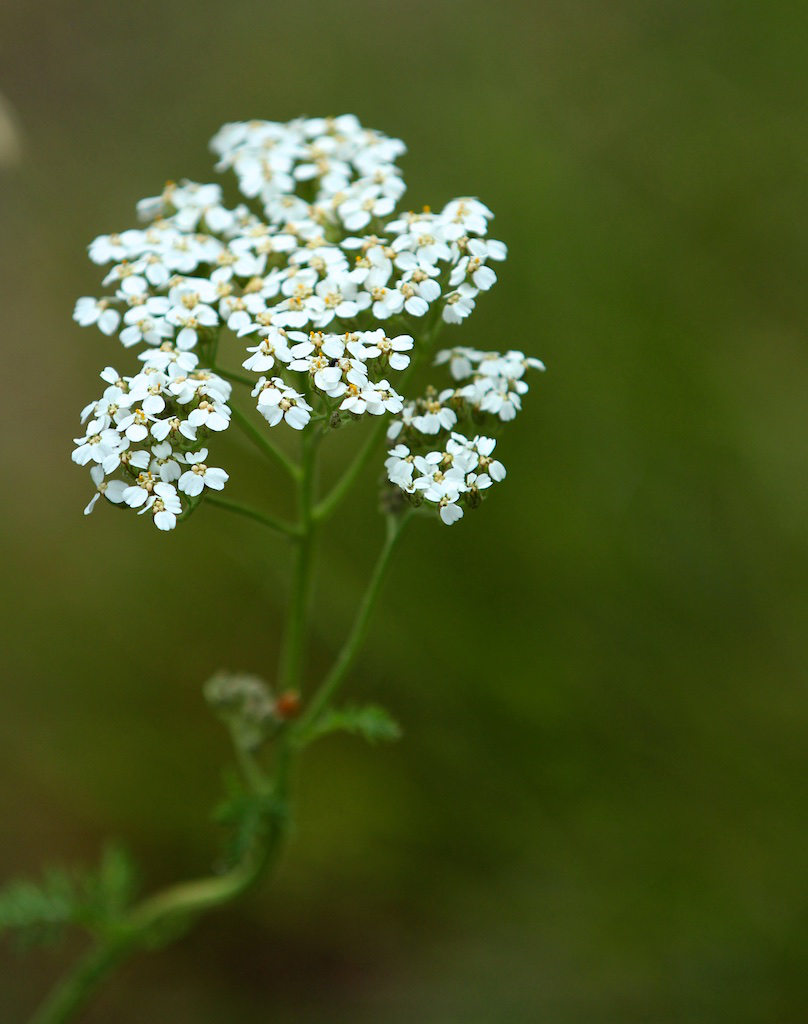 The Yarrow Plant for Digestion

Yarrow’s ability to stop bleeding, heal wounds, abate infections, and address many symptoms of colds or flu often get highlighted, but there’s a lot more to yarrow.

The bitter aromatic qualities of yarrow can be used to support healthy digestion. It can be added to bitter blends or taken as a tea. One preliminary study showed some benefits of using an herbal blend including yarrow, ginger and Boswellia in patients diagnosed with irritable bowel syndrome (IBS).12 Eclectic herbalists used yarrow for people with dysentery.13

The Yarrow Plant for Women

Yarrow’s gifts of harmonizing the blood make it useful for a wide range of women’s health issues. Eclectic herbalists used it for both urinary hemorrhage and leucorrhea.14 Dr. Aviva Romm recommends it as a topical treatment for varicosities related to pregnancy.15

One double-blind clinical trial found that yarrow was effective at relieving pain associated with menstrual cramps.16

The Yarrow Plant for Oral Health

Michael Moore, in his book Medicinal Plants of the Mountain West, shares how he used yarrow root to relieve his toothache. Yarrow, with its astringent, anodyne, and antimicrobial properties, seems well suited for the situation.

One study showed that a distillate of yarrow healed the symptoms of oral mucositis in chemotherapy patients faster than simply using the routine solution.17 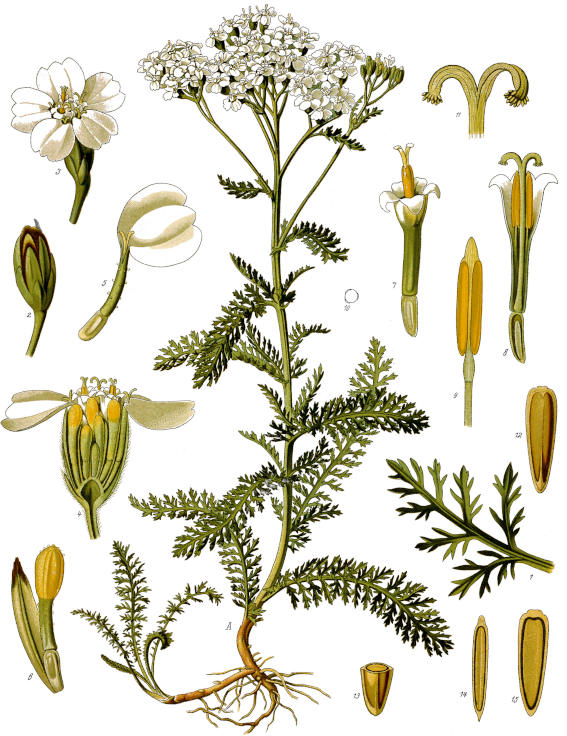 The genus Achillea may refer to the Greek war hero Achilles or his soldiers using yarrow for their wounds. However, The Iliad, which recorded some of the adventures of Achilles, never mentions yarrow. As one botanist writes, “The identification of yarrow with Achilles is old and strong, but elusive.”18

The Kew Botanic Gardens of London recognizes over 150 different species of plants in the Achillea genus. Achillea millefolium is the species most often used by herbalists.

The species name millefolium means a thousand leaves, referring to the finely divided, feather-like leaves of yarrow. In the spring, they emerge from the ground. They also grow along the flower stem. The plant often spreads by its rhizomatous roots.

Yarrow loves to grow in sunny fields and meadows, although it can tolerate some shade as well. It commonly grows all over the globe. It reaches one to three feet in height and is a perennial herbaceous herb, meaning it dies back each year but emerges again in the spring from the roots.

The flowers grow as a compound corymb and are most often white, but can have some pinkish hue. Yarrow has both the ray and disk flowers characteristic of the Asteraceae.

I’m often asked if yarrows with different colors of flowers can be similarly used. My best advice is to follow your senses. I recently had a group of herbal students over for an afternoon plant walk. I had them smell and taste both the wild yarrow growing in a dry field and the pink cultivated yarrow I had bought from a nursery. The consensus was the pink cultivated yarrow smelled sweeter and softer, while the wild yarrow had a stronger more aromatic scent. The difference was very noticeable. Like all plants, yarrow’s strength and aromatics change wherever it grows and becomes stronger under difficult growing conditions.

The leaves and flowers of yarrow are most often used by Western herbalists. Ethnobotanical texts, and herbalist Michael Moore, sometimes recommend the roots.

Yarrow can be made into a tea that can have a strong taste and is often combined with other herbs.

Yarrow is commonly used as an alcohol extract (tincture).

Yarrow can be externally applied as a poultice or infused into oil and used in salves or to make suppositories.

Yarrow’s aromatic qualities can be garnered in a facial or vaginal steam.

Yarrow is also distilled and used as both a hydrosol and as an essential oil. Vast quantities of yarrow are needed to make the essential oil and so hydrosols are recommended as a more sustainable option.

Special Considerations for the Yarrow Plant

Yarrow has not been shown to be safe during pregnancy.
Those who are sensitive to plants in the Asteraceae will want to use caution.