Our immunity system is so incredibly amazing! Immunologists dedicate their whole lives to understanding how this one system in the body works.

However, in real life, it is impossible to truly separate the body into different mechanical parts because it is innately connected. One aspect of the body influences the other through an intricate web that results in our total body.

The immunity system is no exception and it is actually a rebel within the western model of understanding because it does not have a specific set of organs and, instead, is a variety of biological structures.

Essentially, your immune system is a set of biological structures and processes that can detect a wide variety of invading microorganisms from viruses to bacteria to parasites.

In order to do this, your immunity system must recognize the difference between self and non-self. This is a complex system that must continually evolve as pathogens are continually evolving as well.

Seen within the context of ecology, both human and environmental, immunity is about HARMONY and not resistance, a dynamic dance with the environment and not simply a series of barriers to it.
- David Hoffman

The innate immune system provides nonspecific resistance. It protects your body from all pathogens and other foreign substances by using the following methods:

This includes the skin and the mucous membranes.

The skin prevents pathogens from entering the body, both because the pH of the skin can kill some bacteria and also because the epidermis of the skin has closely packed cells preventing entry.

The mucous membranes do not have the advantage of the closely-packed cells like the skin, but it produces mucous that can engulf microorganisms. Most mucous produced in the upper respiratory system is swallowed and, upon entering the stomach, the acids present destroy the pathogens.

Other mechanical barriers in the non-specific immunity response include fluids that flush the system. This involves saliva, tears, and urine.

Chemical actions in the body are another type of immunity that can disrupt pathogens from reproducing.

Some examples of these include the enzyme lysozyme, which destroys bacteria. It is found in tears, saliva, mucous, and perspiration. Pepsin is a chemical found in the stomach that stops foreign microorganisms from replicating. The chemical interferon stimulates healthy cells to inhibit viral replication within cells.

Phagocytosis is an immune response that includes the engulfing and destruction of micro organisms as well as damaged or old cells and other cellular debris. Phagocytosis is a process carried out by phagocyte cells and macrophage cells.

Phagocyte literally means “to devour” and macrophage translates to “big eater”. Besides phagocytosis, phagocyte cells can also alert the immune system that pathogens have entered the body.

Phagocytosis is an important part of the immunity system response and one that I frequently discuss in my herbal lectures on the immune system. One way to think about this is to equate it with pac-man. Just as pac-man goes through the maze to engulf bad guys, macrophages prowl your body to consume cellular debris and pathogens.

Some herbs like Echinacea and Boneset (Euporium perfoliatum) can stimulate or increase phagocytosis. 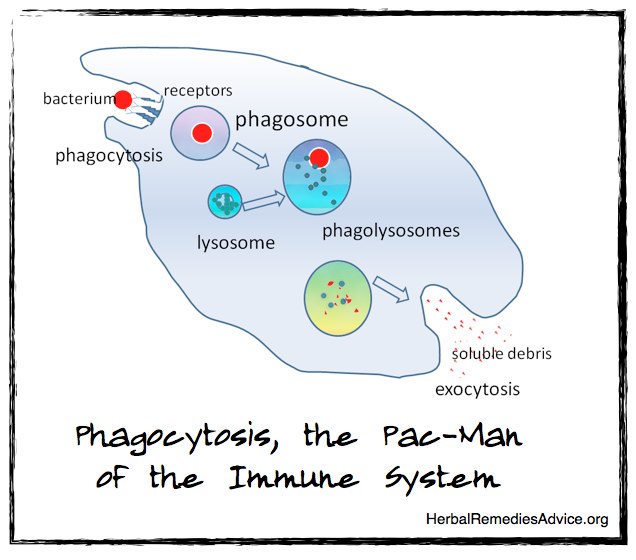 Inflammation is a localized immune response that inhibits infections and promotes healing.

It is easy for us to think that inflammation is “bad” since it is characterized by pain, redness, heat, and swelling. However, inflammation is an important part of the immunity system.

Pain can result if there is an infection present from the swelling or from irritation of nerve endings.

Through the process of inflammation, white blood cells become attracted to the area to inhibit infection. Phagocytes and macrophages come in to phagocytize bacteria. All of this extra cell activity - white blood cells, macrophages, and dead bacterial cells - may form a thick white to yellow liquid called pus.

The inflammatory process inhibits infection and then promotes healing by stimulating cell division to repair any damage.

A fever is another important immune system response that often gets a bad rap. Pathogens are killed at certain temperatures. A fever then raises the body’s temperature in order to make the environment less hospitable to the invading microorganism. Not only does this inhibit the growth of pathogens, it also increases immune system functions.

The immune system can also have a specific resistance to an organism. This is the production of specific cells to attack a specific invader. These cells create a memory of the specific pathogen and if it is encountered again the response is quicker and stronger. This is why people often only get chicken pox one time. After the initial infection the immune system is able to take care of the chicken pox virus before it can cause another systemic infection.

Lymphocytes are an important part of the specific immunity response. All cells have antigens that are surface-recognition molecules. After a lymphocyte goes through the specialization process it is able to recognize “self” cells from foreign cells. So it knows to attack cancer cells or viral cells and to not attack self cells.

T lymphocytes target specific foreign cells to attack. They remember the antigens of these cells in case they should appear again. When specific T cells (Th cells) bind to antigens they release cytokine chemicals. These chemicals attract immune system cells to the site and increase phagocytosis. Further, they stimulate cell division and the immune response from activated B and T cells.

As T cells increase and the pathogen in the body decreases the immunity system slows down.

In antibody-mediated immunity B and helper T cells bind to pathogen cells in order to tag them for other cells to destroy. This process inhibits extracellular pathogens.

This works because cells in the body recognize foreign antigens. Once recognized, B cells bind to the antigen, starting the antibody-mediated immunity. Plasma cells in the body produce specific antibodies to the antigens. They then circulate throughout the body looking for these antigens. Once they find them they bind to the non-self antigens, which are then destroyed by phagocytosis. If the same antigen re-enters the body at some time in the future then B memory cells act more quickly and more strongly to stop the antigen.

The first time an antigen is encountered the immunity system launches its primary immune response. B and T cells are stimulated to produce clones that attack and destroy the non-self antigens. This particular antigen is filed away in memory B cells.

Again, this is why people tend to only get chicken pox once. When the body comes into contact with it again, it launches a secondary immune system response that quickly inhibits the virus before it becomes a full blown illness.

Here is an overview and explanation of different immunity types.

How it works: A person becomes ill as a result of the pathogens. The immune system is activated into a primary system response and the memory of the infection is stored away. If the pathogen ever enters the body again, the immune system launches a secondary response that is stronger than the first and prevents infection.

How it works: An injection of a weakened pathogen or some variation of their pathogens are given to a person and an immune response happens without the person becoming overtly ill.

Mechanism: An injection of antibodies or antitoxins against an antigen.

How it works: Immunity is acquired in the short term. Booster shots are needed. Tetanus is a common example.

Mechanism: Antibodies the child receives from the mother either through breast milk or in utero.

How it works: Short term immunity is passed onto the baby without creating an overt illness.

The hygiene hypothesis is the theory that your immunity system needs to be introduced to a wide range of pathogens early in life in order to develop fully. If you are raised in too sterile of an environment it increases your chances of developing long term immunity issues such as asthma, allergies and autoimmunity.

The originator of the hypothesis first saw a correlation between small families and higher risk of asthma and eczema. The hypothesis was that fewer children meant fewer pathogens in the family. This idea has been expanded to the differences in being raised in a city to being raised in a farm where children play outside and in the dirt.

The immunity system is a complex physiological function that serves to fight infections and keep your body healthy. This complex system acts in a wide range of ways from innate immunity to adaptive immunity, from non-specific immunity to specific immunity. A strong immune system means a healthier life.