This probably won’t surprise you, given its common name, but Viburnum opulus is exceptional at relieving muscle cramps. It has a special affinity for smooth muscle tissues but works well for striated muscles as well.

But plants rarely are that simple and, instead, have more complex ways of working in the body. For example, herbalist jim mcdonald categorizes cramp bark as an herb that “relaxes tissues and astringes tissues.” He feels that it both astringes mucosa and relaxes the underlying muscle tissues.

This monograph will look at the myriad of ways that Viburnum opulus works to relieve muscle cramping and astringes tissues, how to use it  with the best results, and how to avoid using it like a Band-Aid solution without ever getting to the root cause of the problem.

Cramp bark is the herb that many herbalists reach for to relieve painful menstrual cramps. It seems to work best if taken 1-2 days before cramping starts, but can also be taken as needed.

Cramp bark is considered a uterine decongestant. Signs of uterine congestion include bloating, cramping before menstruation, as well as delayed menses. Uterine congestion can also be a pattern associated with endometriosis, fibroids and ovarian cysts.

I’ve talked to many women who have had menstrual cramps their whole lives and think that this is “normal.” Painful menstruation is not natural! It’s a symptom and can be addressed.

My take-home message is that, yes, cramp bark is stellar for relieving painful menstrual cramping. However, if a woman is continually experiencing painful cramps or other PMS symptoms, then it is far better to get to the root cause of the matter and get rid of them once and for all!

The chief therapeutic error made when treating acute severe menstrual cramps is to under dose, both in the size of the dose and its frequency. The German author R.F. Weiss suggests minimum doses of 20-30 drops, and a maximum of a teaspoon (Weiss). Doses may be repeated every several hours. Ellingwood suggests 20 drops every hour.
- Paul Bergner, NAIMH Course Materials 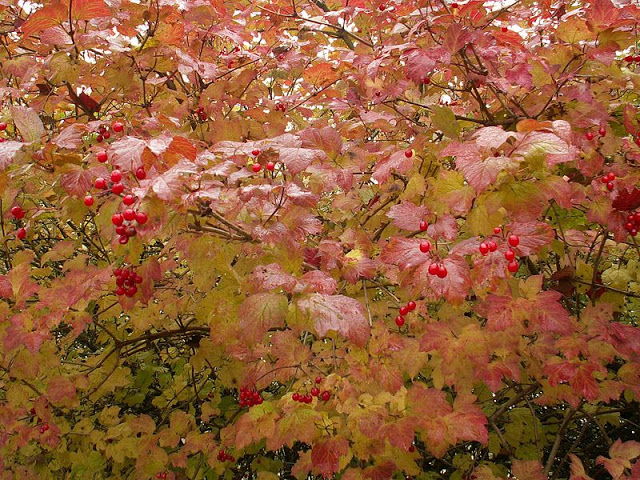 Urinary tract infections and bladder infections are often associated with frequent and painful urination. Cramp bark can relieve the pain and decrease the urgent frequency as well. Of course, the infection itself will still need to be addressed, but cramp bark will ease a lot of the discomfort.

Cramp bark can also relieve the pain of cramping that originates in the bowel. This is especially useful for more chronic conditions like Irritable Bowel Syndrome (IBS).

For acute cases of diarrhea, such as in food poisoning, we don’t necessarily want to prematurely stop the diarrhea. However, it is doubtful that cramp bark would have an inhibitory effect.

Spasmodic coughing can be the worst kind of cough. This is characterized by a dry cough, meaning no mucus is expectorated, and often gets worse at night. It can be spasmodic in nature, resulting in repeated coughing that keeps you from sleep, burns the throat and is all-around unpleasant.

There are many causes for high blood pressure and many ways to find solutions for high blood pressure. Cramp bark can relieve tension in the cardiac muscle, arteries and veins, which can contribute to decreased blood pressure. This is especially suited for the person with lots of stress, tension and a type A attitude. Of course, diet, lifestyle and other cardiac herbs will need to be used to make a difference in someone’s long-term health. 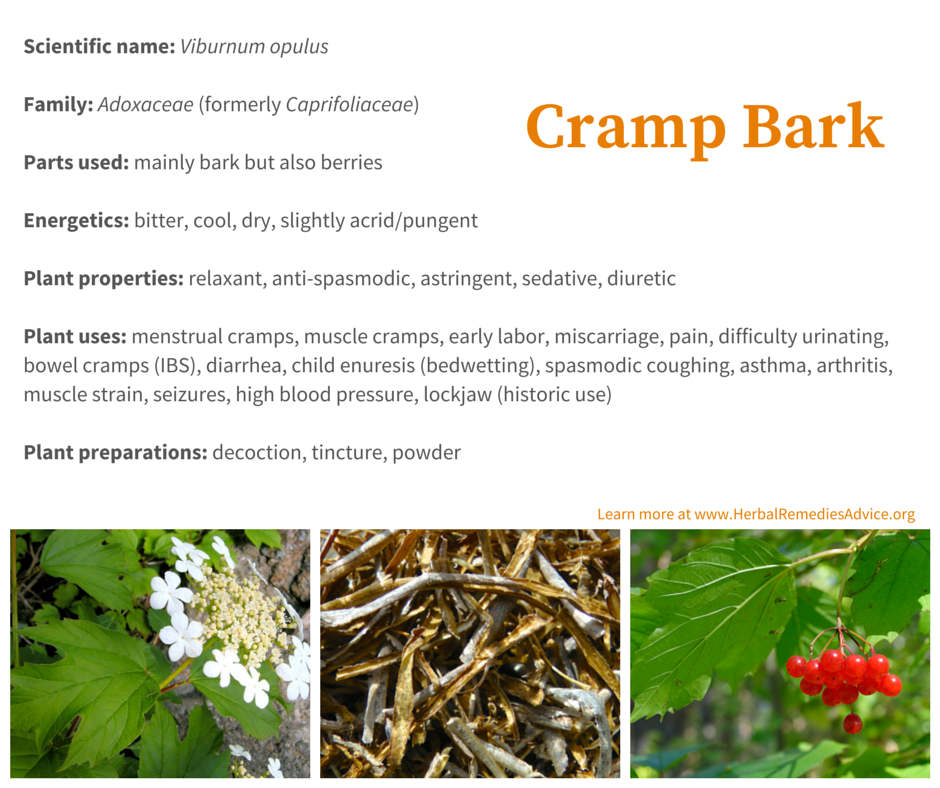 Have you ever “thrown out your back”? I have, countless times. One minute you’re doing a seemingly innocent thing like picking something off the floor (or you’re totally overdoing it gardening) and bam! something slips out of place and the pain increases steadily until lifting your pinky finger creates excruciating pain.

After a while the muscles around the area seize up, which immobilizes you even more. This is not necessarily a bad thing! Those seized muscles are protecting this vulnerable area. The holistic approach here is rest! Popping some pills or herbs and then heading back out to the garden is not a good idea and it can injure you further.

I often use cramp bark as a fomentation over cramped muscles when I’ve thrown out my back AND I rest and stay mostly immobilized. The cramp bark fomentation significantly decreases the discomfort, but I am also not going to push myself too much and increase the risk of further injury.

Another common way that cramp bark can be used is for restless legs. Restless legs are when your legs jump and move involuntarily as you are falling asleep. The underlying cause needs to be addressed, whether it is a nervous system issue or nutrient deficiencies (hint: magnesium deficiency is common). However, while figuring out what is going on, cramp bark tincture or cramp bark tea can relieve the spastic muscles and promote sleep.

Cramp bark is used by midwives for both a threatened miscarriage, early labor and during labor. Kinda sounds a bit contradictory. That’s the beautiful complexity of herbs.

Cramp bark can relax the uterus to stop uterine contractions if they are happening too early, such as in a threatened miscarriage or early labor. However, cramp bark also helps to tone and regulate contractions, which can facilitate a healthy labor.

Even though cramp bark is a uterine relaxant, it does not appear to interfere with labor. Rather, it promotes uterine muscle tone and regulates the rhythm of the contractions, resulting in effective uterine contractions. Cramp bark is also indicated for afterpains and is useful in helping the uterus to regain its normal shape.
- American Herbal Pharmacopeia

Headaches and migraines that are associated with tension respond well to formulas that include cramp bark. Here’s an example of such a formula from herbalist Robert Dale Rogers: 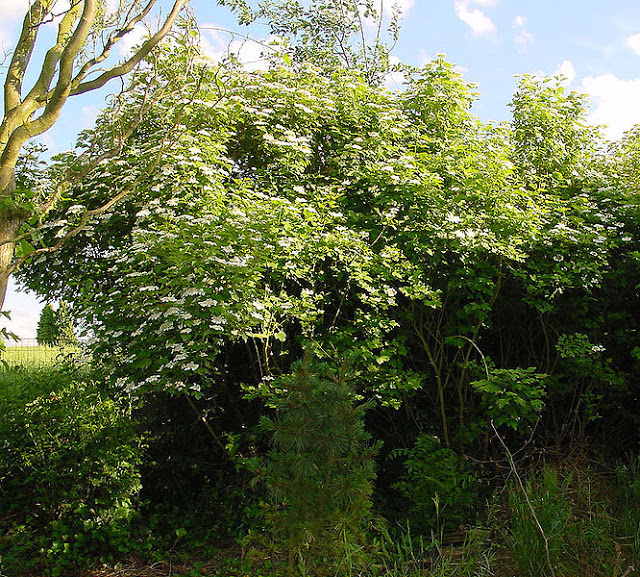 Cramp bark is a deciduous shrub that grows up to 4 or 5 m tall.

It is native to the northern hemispheres and is often grown as an ornamental shrub. 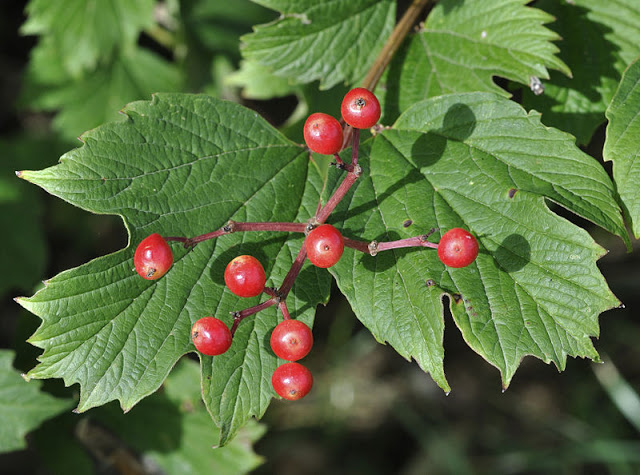 It has opposite leaves with three lobes. The leaves are 5-10 cm long. 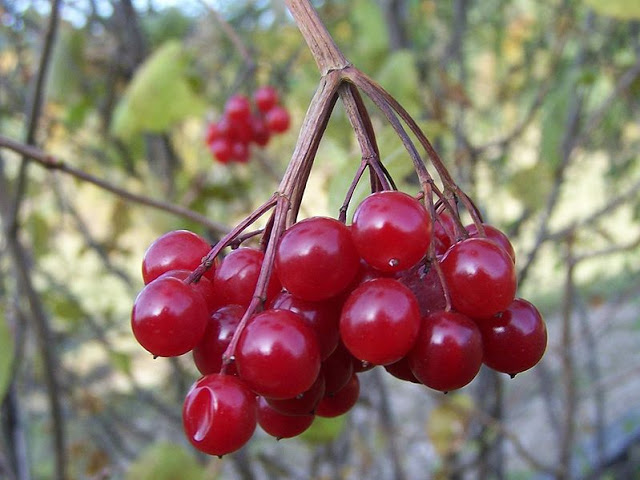 The fruits are produced in drupes and are bright red.

As the name indicates, we primarily use the bark for medicine. Cramp bark can be used in a variety of ways:

Aviva Romm recommends the following tincture for pain in children:

Give 5-10 drops to children under 5; 10-20 drops to children 5-12, and 2-3 mL to older children. Repeat the dose in 15- 20 minutes, then every 2-4 hours as needed. Jamaican dogwood is said to cause respiratory paralysis in excessive doses; do not exceed the above doses and keep out of reach of children.
- Aviva Romm, Plant Healer #6

William Cook wrote in 1869 that his favorite cramp bark preparation was a syrup:

The best method of preparation is in some compound sirup; but it may be formed into decoction by macerating two ounces in a quart of hot water, expressing, evaporating to half a pint, and giving a fluid ounce three or four times a day.
- Cook Materia Medica, 1869

The Berries as Food and Medicine

I have no experience using the berries as food or medicine, so I rely on herbalist Robert Dale Rogers for the following:

The berries are rich in Vitamins C and K, and are used for coughs, colds, or a daily cordial that helps keep hypertension in check. The berries are tart, but delicious and can be preserved as a jam or ketchup for wild game. The berries contain water-soluble polysaccharides that possess immune stimulating activity and enhance phagocytosis.

The following comes from the American Herbal Pharmacopoeia  monograph:

The American Herbal Pharmacopoeia says that there is no known contraindication or toxicity associated with cramp bark. Other herbalists list the following special considerations:

Viburnum opulus is a natural and safe pain reliever for pain that is caused by muscle cramping and tension. Pharmaceutical pain relievers, even mild ones, cause serious side effects, sometimes death. The CDC reports that NSAIDs cause around 7,000 deaths a year!

Cramp bark offers us another alternative that is safer, effective and potentially far cheaper. Given the wide range of cramp bark's abilities, it's a good herb to keep in your medicine cabinet.

This article was originally written for HerbMentor.com.