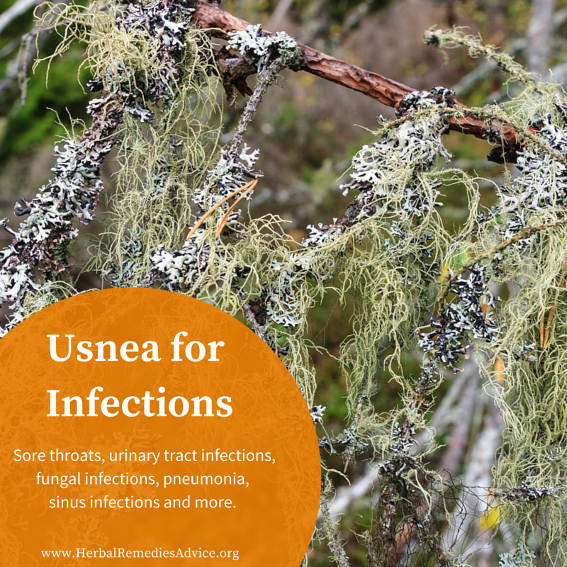 Clinging to the branches above, the usnea herb acts as the “lungs of the forest.” Commonly called old man’s beard, this lichen isn’t a plant but instead a complex relationship between an alga and a fungus. The fungus provides a strong inner core, while the green alga gathers energy from the sun.

I rarely use the prefix “anti-” to describe how an herb works. To say an herb is antimicrobial or antifungal is often far too limiting. Herbs rarely work in one simple way. Instead they are rich in many different constituents (gifts!) that can aid us in a variety of ways that go beyond a limited “anti-” action.

Usnea can easily fall prey to peoples’ desire to put it into “anti-“ categories. Many herbal monographs claim that it is antibacterial, antifungal, and antiviral. Rather than being satisfied with those descriptions, it’s worth diving deeper to more fully understand and appreciate the actions of this lovely medicinal lichen.

Energetics of the Usnea Herb

Usnea is cooling and has a slightly bitter taste. It’s often used when there are signs of heat, inflammation, and infection, which can include redness, pain, and itchiness. It has a special affinity for the lungs and the urinary tract.

Beyond herbal medicine, usnea offers us other ecological gifts. As the “lungs of the forest,” usnea acts like a sponge that absorbs particulates in the air. This makes it very susceptible to pollution. As the American Botanical Council points out, “When lichens disappear, they give early warning of harmful conditions.”1

Usnea has long been used around the world to address infections, including sore throats, lung infections, wounds, urinary tract infections, and vaginal infections.

Usnea is an antimicrobial herb, meaning that it affects a wide range of pathogens. However, it does not act like a pharmaceutical antibiotic that indiscriminately kills all bacteria.

Bacteria can be classified into two types: gram-positive and gram-negative. Both of these types can be pathogenic in nature. Generally speaking, gram-negative bacteria can be harder to control, as they have a firmer cell wall and can more quickly develop resistance to antibiotics.

Many studies have shown that usnea or isolated constituents extracted from it are effective against many types of gram-positive bacteria, including staph (Staphylococcus simulans, S. epidermidis, and S. aureus), strep (Streptococcus spp.), Bacillus licheniformis, B. megaterium, B. subtilis, and Enterococcus faecalis.2,3

Recent research has given us some clues as to how usnea may work. A 2020 study showed that usnea inhibits quorum sensing and biofilm formation for Pseudomonas aeruginosa, an opportunistic multidrug-resistant pathogen.5 In addition, herbalist Dr. Christopher Hobbs shares that usnea’s polysaccharides may boost or modulate immune system activity.6

One in vitro study looked at an extract of usnea against gram-negative H. pylori bacteria and showed positive results.7 More research is needed, however.

Usnea is not believed to negatively affect healthy gut bacteria. While pharmaceutical antibiotics may be useful for targeting one or another specific type of bacteria, they also are powerful drugs that can indiscriminately kill bacteria and take a negative toll on beneficial bacteria in the gut.

Usnea should be taken as a tincture or a salve. I recommend combining it with herbs such as echinacea, yerba mansa, or osha when treating colds, flu, and sore throats when bacterial infection is suspected. It is indispensable in the treatment of strep throat, and can prevent the need for antibiotics.  - Paul Bergner, Herbalist 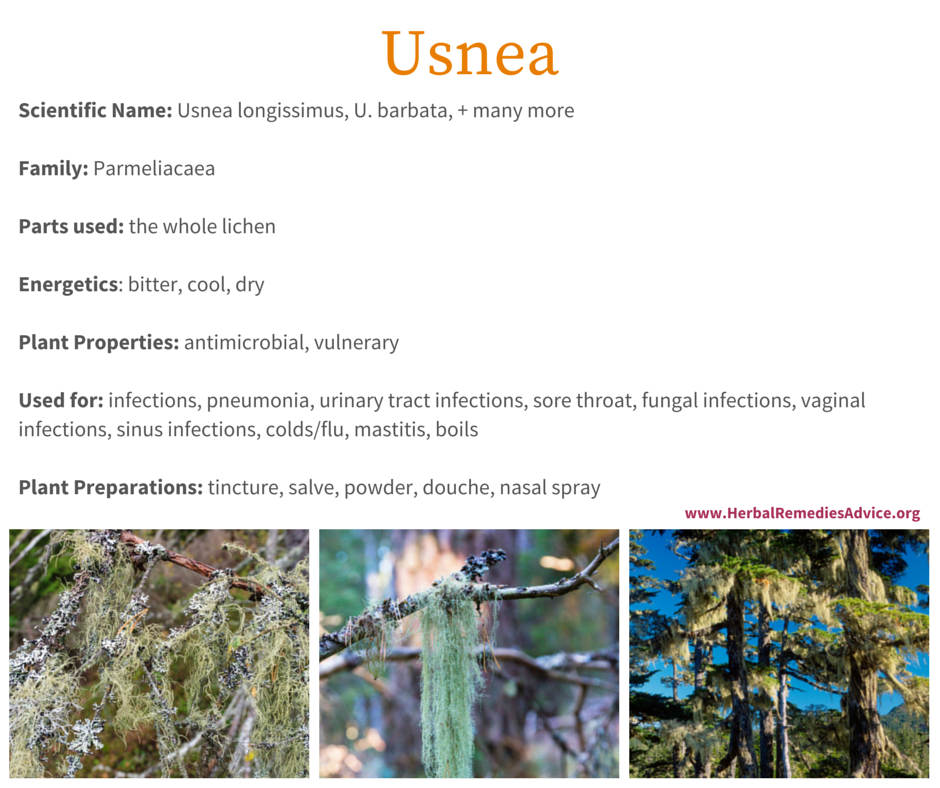 Few studies have been done regarding usnea’s antiviral activity. One older in vitro study concluded that “Usnea complanta exhibited significant antiviral activity at a concentration nontoxic to the cell line used.“8

Another older in vitro test showed usnea’s potential against Epstein-Barr virus (EBV or human herpesvirus-4/HHV-4).9 Steven Buhner reports that it is effective against the human herpes virus family of viruses.10

Usnea is also commonly used as an antifungal herb. It can be used both externally and internally for a variety of fungal infections of the skin, genitals, and nose (sinus infections are often caused by a fungal pathogen).

Studies have shown usnea extracts to be effective against Trichophyton rubrum, the common skin fungus causing athlete’s foot, “jock itch,” and ringworm in humans.11 A 2017 in vitro study showed that usnea was effective against Candida albicans, an opportunistic yeast that can cause mouth, gut, and vaginal fungal imbalances in humans.12

It is worth noting that fungal infections, especially chronic ones, can be difficult to get rid of. Diet (including reduced intake of simple carbohydrates/sugars) and other lifestyle considerations have to be undertaken and herbs may be needed for extensive periods of time to fully resolve chronic fungal issues. 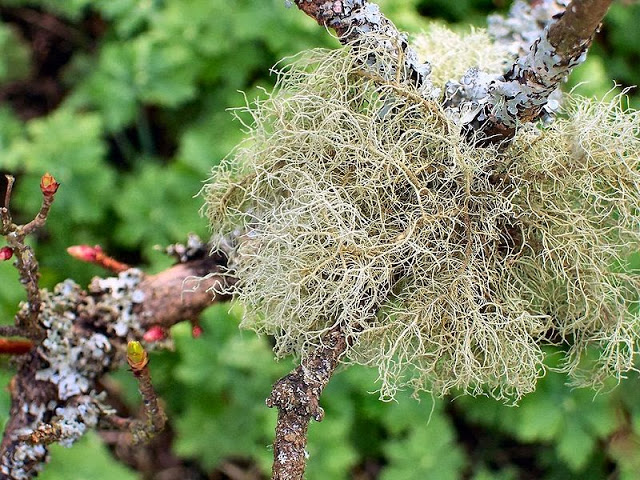 An in vitro 2019 study evaluated the effects of an extract of usnea on multidrug-resistant leukemia cells. The conclusion was: “These data provide compelling evidence that [usnea extract] is a promising agent against multi-drug resistance in leukemia cell lines and suggest a promising therapeutic approach for leukemia.”15

Usnea is a fantastic choice for treating wounds. In addition to being helpful against infections, it also has wound-healing abilities that can quicken the healing process.

To apply usnea on a wound, you can use a diluted tincture, powdered herb, wash made from a strong tea, or salve (if the wound is not infected). 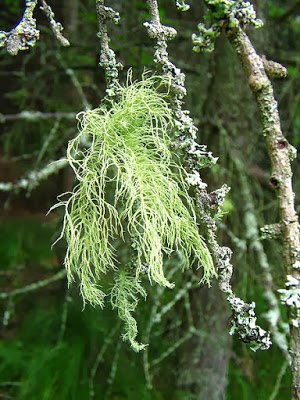 While usnea is certainly a medicinal herb, it’s not a flowering plant!

Usnea is a lichen, which is a symbiotic relationship between an alga and a fungus. There are over 600 species of usnea that grow across the world and many of these species are interchangeably used. You can research your local usnea species by checking regional plant identification resources and talking to local herbalists and plant experts.

The best way to identify an usnea thallus (the body or vegetative portion) is by taking a moistened strand and gently pulling it apart. If it is usnea, you will see an inner white- or cream-colored strand that is somewhat elastic. This inner white strand is the fungus core, while the green outer covering is the alga. If the usnea is too dry, the inner strand may be hard to see. Note also that the branches of the usnea thallus are always round in cross section.

Usnea grows on trees. It especially likes pine, spruce, juniper, fir, and hardwoods like oak, hickory, walnut, apple, and pear. It prefers moist habitats, such as places where there is high humidity or regular fog or rain.

Usnea is a ubiquitous lichen that grows all over the Northern Hemisphere. However, it is a very slow-growing lichen that could be easily over-harvested. The best way to ensure sustainable harvesting practices is to gather usnea from freshly fallen branches after a storm or in the regular shedding of branches in a forest.

Another consideration for harvesting usnea is that it can absorb heavy metals, so it is especially important to gather it in an area that doesn’t have a lot of air pollution.

The constituents of the usnea herb are not particularly water soluble. As a result, it is often recommended to be prepared as a tincture (alcohol extract) or oil/salve. However, I think it is important to note that alcohol was not historically widely available and alcohol is not used in some cultural settings today, so usnea may also be used as a tea.

Usnea also works well as a salve. First, powder the dried lichen well. Infuse the usnea powder into oil using the hot oil infusion method. Once the oil is made and strained, it can be prepared into a standard salve.

Usnea is commonly used for vaginal bacterial or fungal infections. It can be used as a douche by diluting the tincture in water or by making a strong tea. Herbalist Scott Kloos recommends diluting 1/2 fluid ounce of usnea tincture in 16 ounces of water to make an effective douche.16

Special Considerations for the Usnea Herb