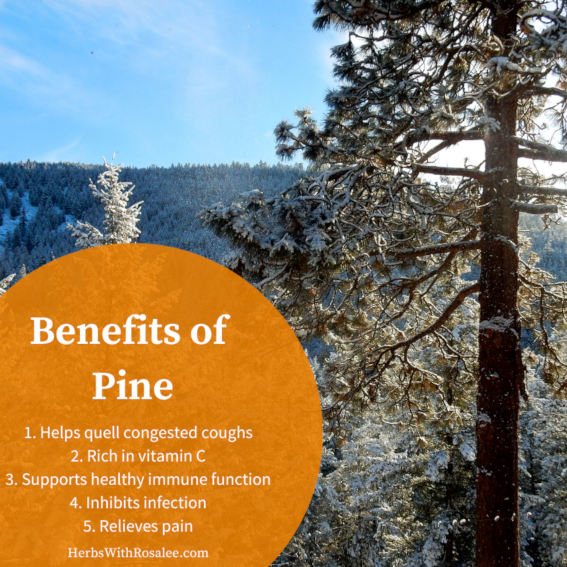 My office windows look out onto a beautiful pine tree. Many moments of my day are spent gazing at the branches and the life within it. A squirrel is a frequent visitor, gnawing pine cones, leaving a midden of pine cone scales below. I’ve seen many birds stop for a rest, including a pygmy owl last winter. This is what my dad jokingly calls cheap entertainment. Cheap, of course, in price only. The moments of peace and beauty around a pine tree are priceless.

Pine trees are conifer or evergreen trees within the Pinus genus. You probably have pine growing near you as there are at least 126 recognized species of pine trees across the globe.

Pine trees can live for hundreds or even thousands of years. One of the world’s oldest living organisms is a bristlecone pine tree (Pinus longaeva) called Methuselah who is 4,600 years old.

The land we live on and care take is filled with pine trees, from the smallest of saplings to large giants towering a hundred feet into the sky. Our home is a cabin constructed with large pine and Douglas fir logs. Chances are your home is built with pine too, as pines are one of the most commercially important trees across the globe and are frequently used in home construction.

We even rely on pine wood to keep our cabin warm. While the soft wood isn’t ideal for burning, we do use it mixed in with Douglas fir in our wood stove.

Pine gives us many gifts beyond its timber. The needles, pine resin, bark, and pollen are potent herbal medicines. While towering pine trees are not often thought of as herbs, this is powerful plant medicine.

Have you nibbled on a pine needle lately? It has a surprising taste! Certainly resinous with a touch of bitter, but the most potent flavor that initially bursts on the tongue is the tart/sour taste indicating high vitamin C levels. Per gram, pine needles have more vitamin C than an orange. The young needles have less than older needles, although the younger needles make a tastier tea. To get the most vitamin C from pine needles, eat them raw or infuse them into honey or cold water. Making a hot tea from pine needles does destroy some of the vitamin C, but some remains in the warm brew.

A simple pine needle tea is a delicious beverage and something that can be enjoyed anytime by a healthy person. I love sipping on pine needle tea knowing that I am tasting the forest around me.

There’s also several ways pine needle tea can be helpful during a cold or influenza virus.

Simmering pine needles (decoction), rather than simply steeping in hot water, pulls out more of the resinous and pungent qualities. In this form, the medicine becomes a stimulating expectorant and diaphoretic. I especially love it for thinning congested mucus in the lungs and sinuses. For best results, breathe the steam deeply as you drink. Pine needles are also soothing to a sore throat, either as a hot beverage or infused into honey. 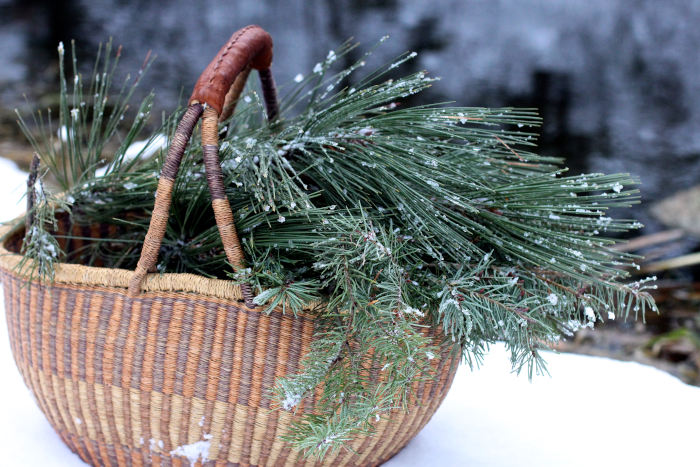 When a pine tree is injured it exudes a thick sticky and resinous substance. This pine resin forms a protective layer across the bark, helps to repel or trap boring insects, and is also antimicrobial, thus further protecting the tree from pathogens. Because it is high in volatile terpenes and nearly solid, pine resin needs to be extracted in oil or in high-proof alcohol. It can also be chewed, although this is a fairly sticky mess and may be difficult to remove from your teeth.

Pine resin is widely used externally as a vulnerary, pain reliever, and “drawing” preparation to remove splinters or other foreign objects from the body.

Katja Swift, co-founder of the CommonWealth Center for Holistic Herbalism in Boston, says that pine is her most frequently used herb. In the December 2017 issue of AromaCulture magazine she writes, “I love [white pine] for almost any kind of skin issue, from wounds to eczema, especially if there is any risk of infection.”1

Pine resins have long been used to ease rheumatic and muscular pain, as a topical cream,  topical salve, or bath herb.

A salve made from pine resin can be rubbed over the chest and back to relieve lung congestion.

This sticky resin can also be mixed with rabbit or deer scat and ground charcoal to make a glue. 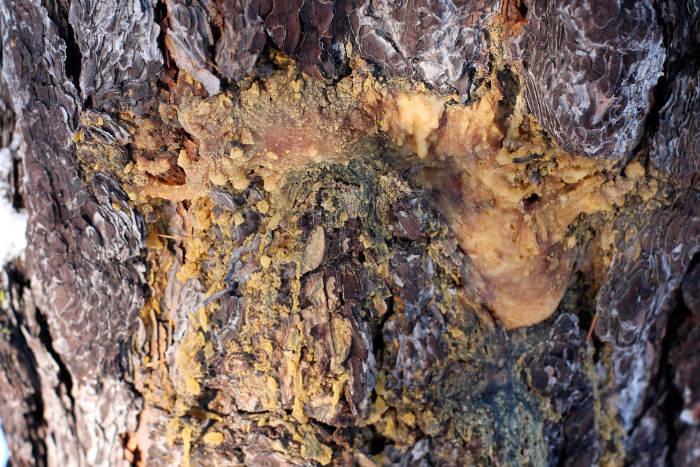 Pine pollen has become something of a superfood fad in recent years. It is being marketed and sold as a hormonal cure-all for both men and women. I haven’t found information about this from a source that wasn’t also selling pine pollen.

I first learned about pine pollen as a nutrient-dense wild food. We harvest the pollen in the spring and add it to crepes and pancakes.

Last year we had a pine pollen storm – it was incredible! The wind kicked up and all the male pine cones that were bursting with pollen let loose. It looked like a thick dust storm, but it was all pollen! Weeks later I was still sweeping pine pollen off of our decks and dusting it from inside the house. (It was a bad time to leave windows open.)

In researching this article I saw a reference that pine pollen may play an important role in the functioning of detrital food webs.3 Each year, a massive quantity of pollen falls to the ground and enriches the soil, feeding soil microbes and small creatures like worms with all the nutrition it embodies. I love the image of these huge towering trees circling around to feed the smallest microbes growing at their feet. 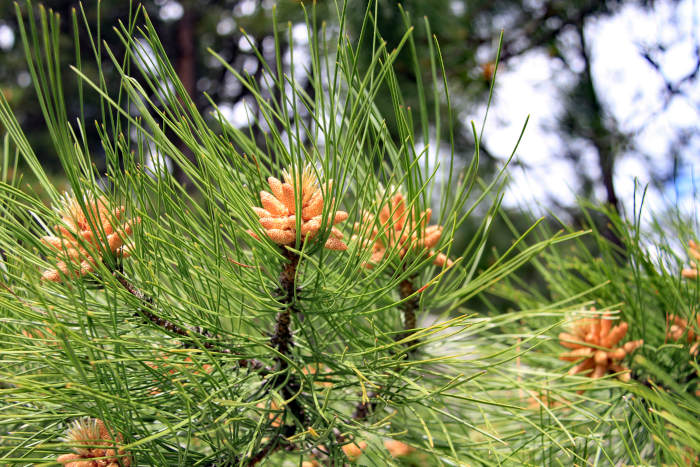 Pine bark is used similarly as the needles and pitch for increasing expectoration and supporting the immune system. A decoction of the inner bark is considered to be stronger than the needles and was historically used for lung infections. The cambium was commonly eaten, sometimes as a famine food, by various First Nations peoples.

French maritime (Pinus pinaster) pine bark extracts, as well as other pine extracts, have been extensively studied for their antioxidant effects in a variety of health complaints. While using extracts are not the same as whole plant medicine, the research is interesting. It makes me think there are many more ways we could be using pine in herbal medicine.

Here are some of the health challenges where pine extracts have been shown to be beneficial: 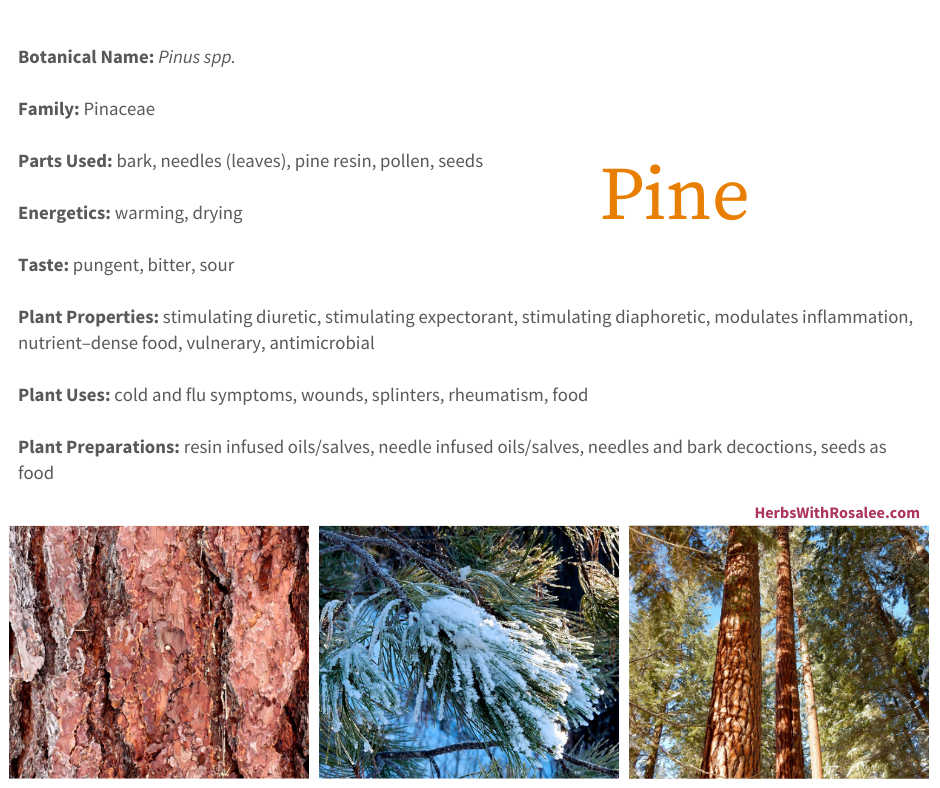 Pine seeds, especially of certain species like pinyon pine (Pinus cembroides group), are important foods to wildlife and humans. All pine trees forms seeds, but many are too small for human consumption. These seeds are commonly called “pine nuts” or “piñons.” 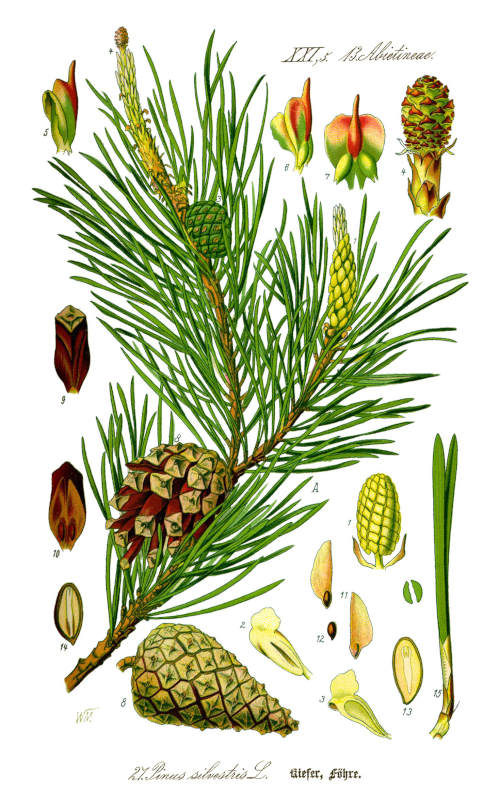 Trees in the Pinus genus can be distinguished from other conifers by their needles (leaves). Pine trees have needles bound in groups of two or more and there is a papery sheath holding them together at the bottom.

There are at least 126 recognized species of pine. To determine your local species, reference a local tree field guide or check the USDA website for the “Subordinate Taxa” in your area.

Because I live in a Ponderosa pine (Pinus ponderosa) forest I’ll focus this section on that particular species.

Ponderosa pine is the most widely distributed pine species in North America.

It loves to grow in sunny locations in mountainous regions.

It grows quite tall, anywhere from 60 to 200+ feet tall. The tallest known Ponderosa pine is in Oregon and is 289 feet tall. The trunks commonly grow to four feet in diameter and the tree may live for 600 years.

The needles grow from 5-10 inches long and are in bundles of three (sometimes two).

The female cones are four to six inches long. When mature, they turn upside down to release their seeds.

Bark on young trees is brown to black. Older tree bark has large scales and the bark is a more reddish or orange color. The thick bark scales protect the tree from the natural fires that occur in Ponderosa pine habitats.

Needles: Harvest the needles at any time of the year. The fresh, new growth will taste better and is well suited for use in foods. The older needles have a higher vitamin C content. Harvest a handful of needles from different trees to avoid causing too much stress on any one tree.

Pine needles can be made into a simple and delicious tea. Simmer the needles for enhanced expectorant qualities. They can also be extracted into vinegar, alcohol, oil or honey.

Bark: Harvest pine bark in the spring. Consider using carefully pruned branches rather than taking bark from the trunk. If possible, use bark from a tree recently felled in a storm or in a managed forest. Pine bark can be simmered as a decoction or extracted in alcohol.

Resin: Pine resin can be harvested at any time of the year, although I prefer the winter, as it is frozen and less of a mess. Bring oil or high proof alcohol with you to remove the pitch that will inevitably stick to your hands. When harvesting pine resin, gather bits that have slid down the tree or fallen on the ground, rather than taking resin directly from the wounded area and thus opening the wound to insect or microbial attack.

Pine resin can be eaten (it’s sticky and resinous) or infused into oil or high proof alcohol. A simple pine resin salve can be made by warming and mixing a blend of half pine resin and half beeswax, then allowing it to cool in the final container.

Pollen: Pine pollen is released by the male cones in the spring – watch the trees to get the timing right. To harvest it, take a brown paper bag and place it over the fertile cones on the end of a branch. Shake well, capturing the pollen in the bag.

Pine pollen can be eaten, encapsulated or extracted into alcohol. Some herbalists make an alcohol extraction (tincture) of the male pine cones when they are loaded with pollen. 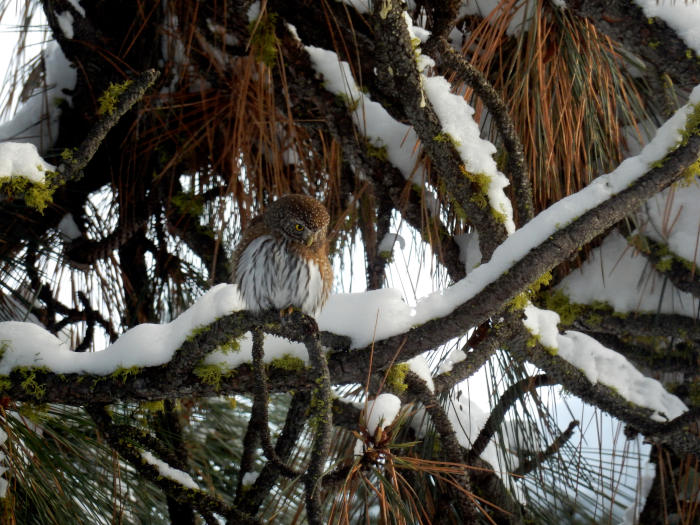