Meadowsweet Herb: Queen of the Meadow 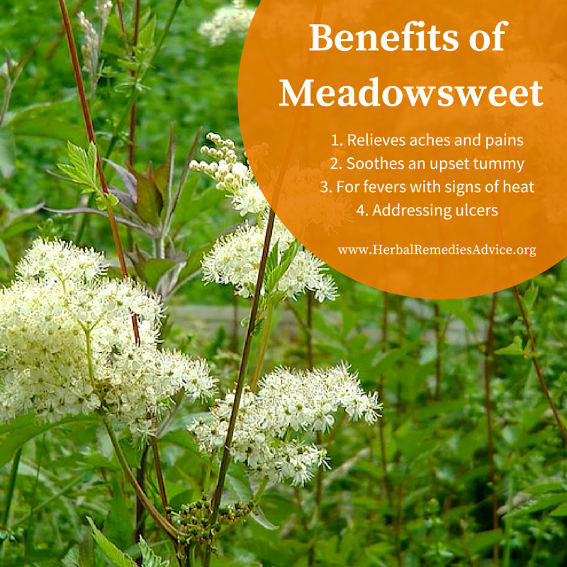 If you’ve ever seen Meadowsweet herb growing wild, you know why it has been called the Queen of the Meadow. This ubiquitous plant with brilliantly white flowers dominates the meadows it calls home. Its contemporary common name, meadowsweet, may not just refer to the plant’s favorite living space, but also to its common use as a flavoring agent in meads and ales.

It was also once commonly called brideswort, possibly because it was used as a strewing herb and as a bridal garland at weddings. It has a deep heady scent that is loved by many. (Also, strong smelling plants are useful in a crowded room of people, especially before modern day hygiene practices.)

Summing up the health benefits of meadowsweet quickly, you could say that it is a cooling, aromatic and astringent herb that relieves pain. In this monograph we’ll take a closer look at how herbalists use meadowsweet to better understand this beautiful rose-family plant.

Meadowsweet was one of the three most sacred herbs used by ancient Celtic Druid priests. It is mentioned in the Knight’s Tale by Geoffrey Chaucer (fourteenth century C.E.), and described in old European herbals, including those of John Gerard
(The Herball, 1597) and Nicholas Culpepper (The English Physitian, 1652).  - Commission E Monograph

Meadowsweet Herb Contributed to the Beginning of Big Pharma

Meadowsweet is an aromatic plant high in essential oils. This gives it a strong and pleasant scent. It is also astringent and contains a significant amount of tannins.

The most notable chemical constituent found in meadowsweet is salicylic acid, which is known to decrease pain.

Salicylic acid was identified and isolated from meadowsweet leaves in 1827. It was known to be analgesic or pain relieving but the chemical extract was too nauseating to be useful.

In 1897, Felix Hoffman figured out how to chemically alter salicin taken from the meadowsweet plant to render it less troublesome for the stomach. Hoffman’s new chemical, termed acetylsalicylic acid, was renamed aspirin and was officially patented and sold by Bayer in 1900. Aspirin became widely used medicine fairly quickly and was the beginning of the class of drugs known today as NSAIDs.

Aspirin is still one of the most widely used drugs on the market with 40,000 tonnes of it being consumed each year around the world! Most people tend to think of over-the-counter medicines as being safe. However, According to the American Gastroenterological Association (AGA), each year the side effects of NSAIDs hospitalize over 100,000 people and kill 16,500 people in the U.S. alone. The most common side effects of aspirin include bleeding ulcers and tinnitus.

Ironically, or perhaps notably, meadowsweet is commonly used by herbalists to heal the problems that aspirin creates. By isolating certain constituents within meadowsweet, and turning it into aspirin, we’ve left out natural buffering agents found in the whole plant. 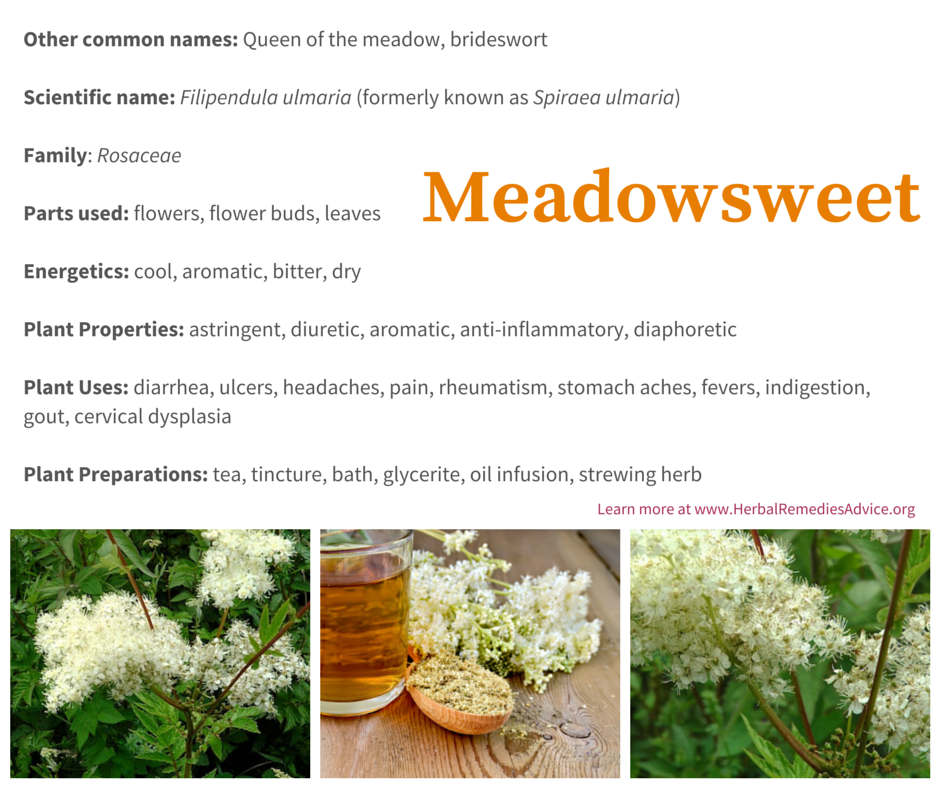 Benefits of Meadowsweet Herb for Ulcers

Meadowsweet is a perfect match for healing ulcers. It is astringent and helps to tighten and tone the lining of the stomach. It is aromatic and helps to support optimal digestion. It also helps to relieve pain (often the worst symptom of ulcers) and it has anti-microbial activity that can address any secondary infection.

Generally meadowsweet is used for ulcers as part of a larger healing regimen rather than as a simple.

Benefits of Meadowsweet Herb for Diarrhea

Many rose family plants are used for diarrhea and meadowsweet is no exception. This astringent plant also tastes pleasant, making it a good choice for children. It can soothe upset tummies, relieve pain and help to stop excessive diarrhea.

Benefits of Meadowsweet Herb for Pain

Meadowsweet is high in salicylic acid, which is well know for its ability to relieve pain. I find the plant to be a mild to moderate pain reliever that is especially suited to stagnant pain (in a fixed location, possibly with a pounding sensation) and for those with symptoms of heat.

The Iroquois used the mashed and powdered dried root as part of a compound decoction with yarrow for side pain, and nausea.
- Robert Dale Rogers 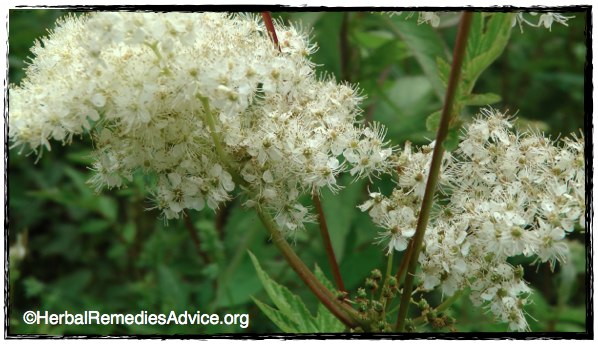 Benefits of Meadowsweet Herb for Headaches

Meadowsweet is especially suited to headaches in which the person has a hot head and feels a pounding sensation in the head. Meadowsweet is cooling and promotes circulation, which can relieve stagnant energy in the head.

Benefits of Meadowsweet Herb for Rheumatism

Besides having the ability to relieve pain, meadowsweet is also anti-inflammatory in nature. Taken daily as a tea or tincture it can help relieve chronic arthritic pain and inflammation.

Benefits of Meadowsweet Herb for Stomach Aches and Acid Reflux

My two favorite herbs for stomach aches and nausea are ginger and meadowsweet (okay, twist my arm, peppermint too).

Meadowsweet shines as an herb for stomach aches, nausea and poor digestion and is especially helpful for those who find herbs like ginger to be too warming. Meadowsweet herb removes stagnation (like when you eat a meal and it stays in your stomach too long) and relieves discomfort in the stomach.

Meadowsweet is one of the best digestive remedies available and as such will be indicated in most conditions, if they are approached holistically. It acts to protect and soothe the mucous membranes of the digestive tract, reducing excess acidity and easing nausea.  - David Hoffman

If someone asks you what to do for reflux but isn’t going to come in and do a consult or listen to a lengthy exposition on the nuance of gastric tissues and processes I say, “You could try meadowsweet and see if that helps.”  - jim mcdonald 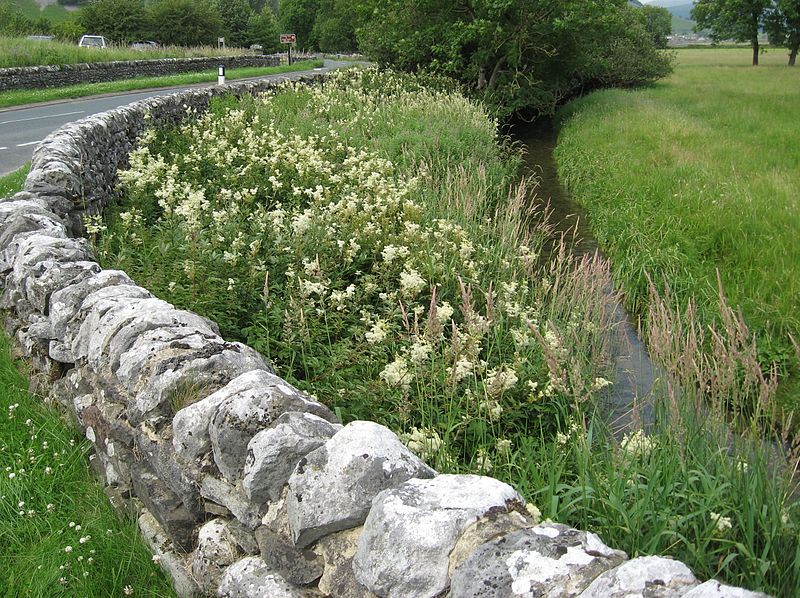 Benefits of Meadowsweet Herb for Fevers

Meadowsweet tea, when taken hot, is a relaxing diaphoretic. It promotes circulation and opens the pores to let the heat out of the body. It is especially indicated when the person has a higher fever or feels hot but isn’t sweating.

I like meadowsweet for respiratory ailments primarily because it can bring on a sweat, and that can lower a too-high fever. Yarrow is another effective sweat- inducer. A combination of these two works very well.  - Henriette Kress, Practical Herbs

Benefits of Meadowsweet Herb for Gout

When taken as cool to lukewarm, meadowsweet tea is an effective diuretic. I have not seen it used much in UTI formulas, but hypothetically it seems like it would be effective. There are several references to meadowsweet herb being helpful for gout (in addition to lifestyle changes). This also makes sense as this diuretic is mildly pain relieving and anti-inflammatory.

Meadowsweet is famous for relieving pain, healing ulcers and addressing diarrhea, but it has also shown to have powerful antimicrobial benefits as well.

In this study, 25 out of 48 women with cervical dysplasia had a complete remission after using meadowsweet ointment! (Cervical dysplasia is the presence of abnormal cell growth on the cervix. This is strongly associated with the HPV virus and has the potential to develop into cancer.)

How to Use Meadowsweet Herb

Meadowsweet is a versatile plant that can be used in a variety of ways.

A simple meadowsweet tea is wonderful medicine. It is strongly aromatic, sweet and slightly astringent. Use a heaping tablespoon, or about 4-6 grams, per pint of water. Steep covered for 5 – 15 minutes. It will get noticeably more bitter with the longer steeping time. The tea is my favorite way to use meadowsweet.

Meadowsweet herb can also work well as an alcohol extract or tincture. Generally, a small amount of glycerin is added to help extract the tannins. 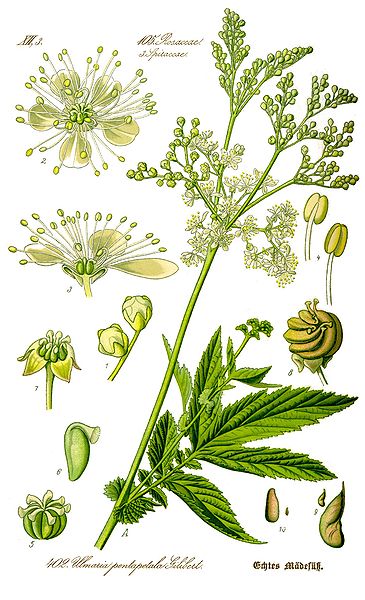 Meadowsweet herb was commonly added to meads and ales.

Here’s a recipe from Herbalpedia for making a meadowsweet cordial.

Put all the ingredients in a pan, having grated off the lemon zest and squeezed the juice. Bring to a boil, simmer for 8-10 minutes, then strain into a bottle, cool and cork. Use diluted in the proportion of 2 Tbsp cordial in a glass, filled up with soda and crushed ice— or use with gin and soda. It is best kept in a refrigerator.

Meadowsweet is safe for most people. However, it should be used with caution for the following people:

Meadowsweet loves to grow in damp meadows and banks. It is native to Europe and Asia, but has been naturalized in eastern North America.

When does meadowsweet bloom? It blooms from June to September and boasts creamy white flowers. The flowers are strongly aromatic and sweet smelling.

The individual flowers are quite small but have five petals and many stamens, typical of the rose family.

The leaves are dark green on top with a whitish and downy color on the underside. They grow as leaflets that are three to five lobed on the terminal leaflet. 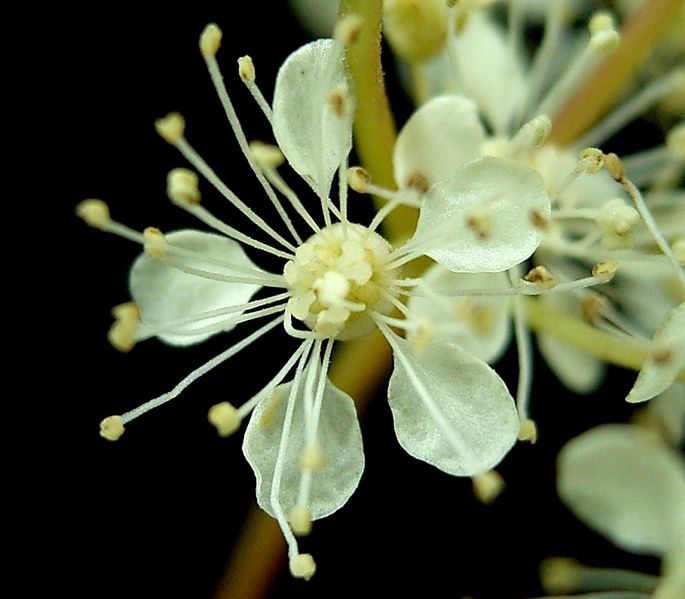 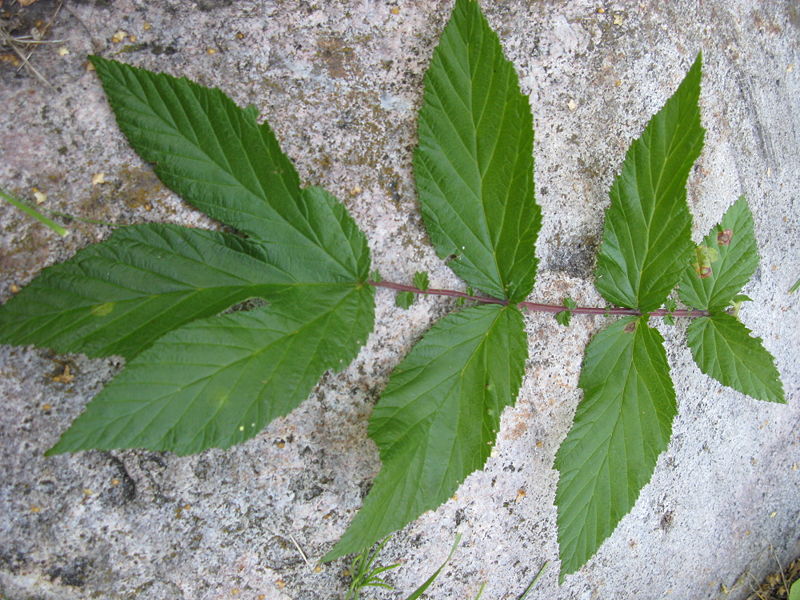