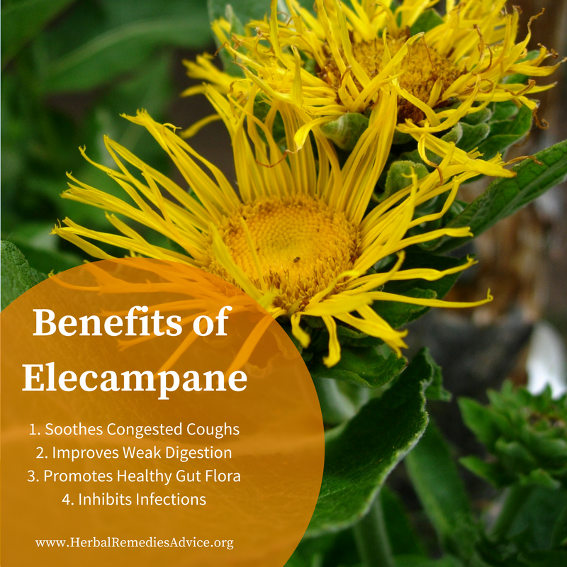 At the height of summer, elecampane has a proud and strong presence in my garden. The stalks tower over my head and are filled with huge leaves and an abundance of yellow flowers. In times past it was once called elfin root, perhaps due to the elves that were said to reside under the leaves or perhaps because the root was used to treat poisoned elf arrow wounds. Its current common name is said to be derived from the belief that Helen of Troy’s tears gave birth to this plant.

Elecampane is native to Europe and Asia and has been used as medicine for thousands of years. It was mentioned in the first and second centuries in De Materia Medica by Pedanius Dioscorides (written 50-70 CE), by Pliny the Elder, and by Galen of Pergamon.1

Elecampane root has a pungent, bitter, and sweet taste. This special combination of tastes make it a strong ally for the lungs and digestion. Elecampane is warming and it gets things moving!

Many of elecampane’s actions can be described as stimulating: a stimulating expectorant, stimulating diuretic, emmenagogue (stimulates the menses), etc. Therefore, it is best suited for stagnant and damp tissues. However, it’s too simplistic to call this a “drying” plant. It isn’t a simple astringent that tightens and tones lax tissues; instead, it stimulates movement of excretions while simultaneously moving old and stagnant dampness out of the body.

Think of a stagnant pool of water filled with muck and grime and other unappealing growth. Elecampane wouldn’t simply remove the obstruction, allowing the old water to flow away; it would also stimulate the flow of fresh water, restoring health and vitality.

It is a popular remedy in coughs, but is often used without sufficient discrimination; for while it answers an excellent purpose in sub-acute and chronic cases where the lung structure is relaxed and expectoration viscid or too profuse, (as in humid asthma,) it is not suitable for cases of any class where the lungs are irritated or dry–as it then increases the dryness, and gives a feeling of constriction.
- King’s American Dispensatory, 1898

In western herbalism elecampane is most commonly used for coughs, especially those that are wet, boggy, cold, and congested. One way it works is as a stimulating expectorant that increases the flow of mucus. Herbalist Matt Wood says that in some cases it strengthens the cough reflex, which facilitates the release of stagnant and stuck mucus from the lungs.2

Elecampane is specific to bronchial infections and was historically used for tuberculosis. Besides moving stuck mucus and restoring healthy mucus, elecampane root is strongly antimicrobial. An in-vitro study found that an elecampane root extract eliminated 100 percent of MRSA strains; however, no human clinical trials have been performed.3

Elecampane root also exerts a mild influence over lymphatic tissues. This can be useful for swollen lymphatic glands of the throat, as well as for the lymphatic tissues in the GI tract (more about this later).

While most commonly used for congestion in the lungs, elecampane can also be used for stuck mucus in the sinuses or to correct post nasal drip. Matt Wood says it is specific to mucus discharge that then causes indigestion, such as post nasal drip.4

The root itself (taken in a syrup with honey) helps coughs, asthma, hernias, convulsions, gaseousness, and the bites of venomous creatures, being generally warming.  - Dioscorides, De Materia Medica (written between 50 and 70 CE) 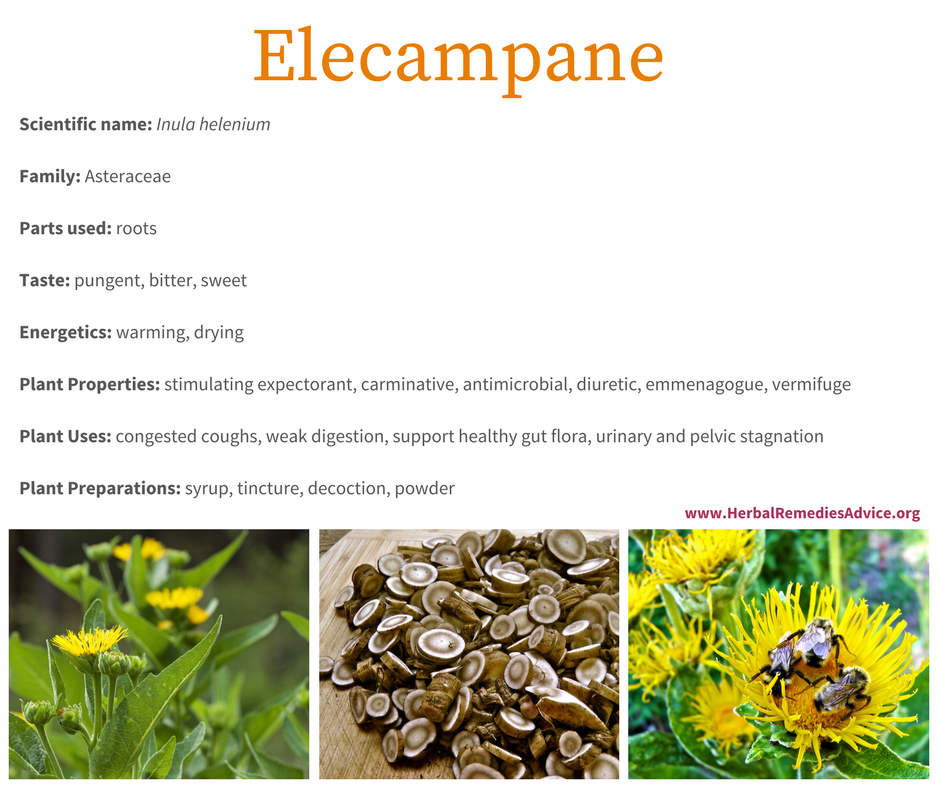 While western herbalists most commonly use elecampane root for coughs and the respiratory system, it is also a powerful ally for the digestive system.

It is specifically used when there are signs of poor digestion coupled with poor absorption, which may energetically be signs of coldness and dampness in the digestive tract.

Signs of cold and damp digestion include poor appetite, mucus in the digestive system, white thick tongue coating, stagnant digestion (where the person eats but feels like the food stays stuck in their stomach), excess gas, and feelings of lethargy and sluggishness.

Remember elecampane’s effects on the respiratory system lymph? It also exerts influence on the lymphatic tissue of the GI tract. When these tissues becomes stagnant, there is poor absorption of nutrients and poor immune system health.

In addition to the stimulating tastes of pungent and bitter, elecampane also has a sweet taste that is due to its extremely high inulin content. Inulin (not to be confused with insulin) is a group of natural polysaccharides, which are large carbohydrate storage molecules commonly found in the roots of plants. The fresh root of elecampane contains up to 30% inulin polysaccharides.5 These large molecules are not broken down by our upper GI tract, but instead pass to the colon where gut bacteria are able to utilize them. For this reason it is called a prebiotic, which is a substance that feeds and supports healthy gut flora.

This high inulin content in elecampane is also helpful for people with blood sugar issues, such as type II diabetes. This starch (inulin) slows down sugar metabolism, reducing harmful blood glucose spikes that contribute to insulin resistance. Inulin may also have antioxidant qualities that can reduce the systemic inflammation often associated with this disease.6

Elecampane’s ability to strengthen digestion and improve absorption helps to restore health for people who are malnourished.

Elecampane is also a vermifuge and is used against intestinal parasites. 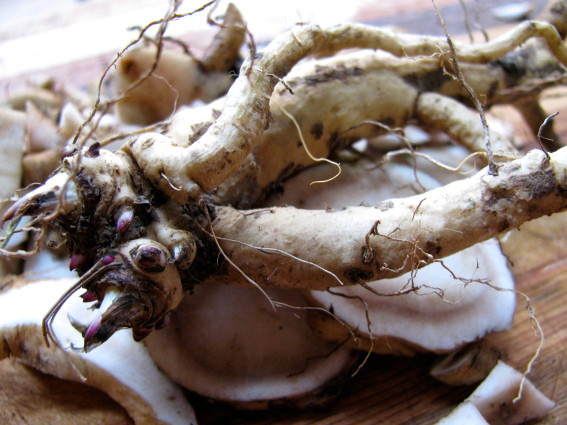 Elecampane Uses for Stagnation of the Pelvis

Many texts report that elecampane is a uterine stimulant that can move dampness or stagnation in the pelvis.7,8,9 This certainly is in line with its more common use in the respiratory and digestive systems; however, this use is not common among contemporary western herbalists.

Elecampane Uses for Stagnation in the Urinary System

Elecampane root is similarly mentioned as a diuretic that is specific to UTIs, cloudy urine, or edema. Lesley Tierra says that the Chinese use a similar species, xuan fu hua or Inula salsoloides, as a diuretic, but it is the leaves and stalks that are used.10

How to Use Elecampane

Western herbalists use elecampane root, both dried and fresh. Elecampane is easy to grow in gardens with moisture and sun. It thrives in my zone 4 garden. It does not do well in hot southern climates.

The fresh root can be harvested in the fall after the plant has gone to seed or in the early spring before it puts its energy into the leaves (I prefer the fall roots). I have grown the same elecampane plant for almost a decade. In the fall I gather some of the substantial horizontal roots and leave the rest of the plant to continue growing.

Fresh elecampane root can be infused into honey, macerated in wine (port is lovely), or extracted in alcohol.

The dried roots can be decocted for a tea or syrup or extracted in alcohol (see my recipe for an elecampane cough syrup here).

When dosing elecampane for acute coughs, smaller frequent doses are recommended. I generally start with a low dose and slowly increase until results are felt without being overly drying or nauseating.

Asian traditions also use the flowers of various species. I once tinctured the flowers of Inula helenium, but did not find them to be particularly strong or medicinal. More information about the Chinese use of elecampane can be found in Western Herbs According to Traditional Chinese Medicine: A Practitioner’s Guide by Thomas Avery Garran. He also has a short article found here. 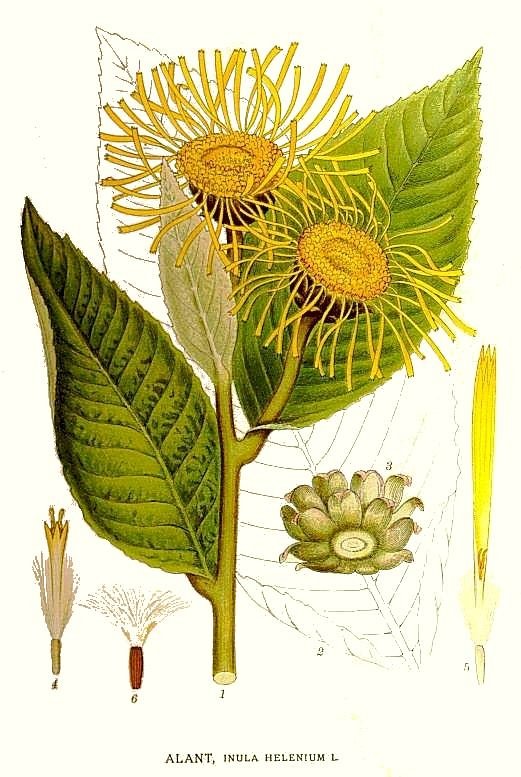 Caution is warranted during pregnancy as it may be a uterine stimulant. (The Botanical Safety Handbook lists it as safe for pregnancy.)

Large doses may have an emetic (nauseating) effect.

Contact dermatitis has been reported with this plant. Those with a known sensitivity to plants in the Aster Family may be most susceptible.

There are about 100 species within the Inula genus, several of which are used as herbal medicine. This article focuses on Inula helenium.

Inula helenium is an herbaceous perennial that can grow up to 10 feet tall. It thrives in sunny to partly sunny conditions with moist soil. It grows easily in gardens and can be found on roadsides and in pastures.

It blooms with yellow daisy-like flowers that are around 3” in diameter. My large elecampane will have up to 100 blooms each year. Bees love the flowers.

Elecampane’s simple leaves are large and abundant, measuring up to two feet long.

The abundant roots are creamy white to yellow and are easy to harvest in the garden. While some roots go deep to anchor the plant, many other roots spread laterally.

The bitter aromatic roots of elecampane make a strong impression on the lungs and digestion. Stimulating and draining, they remove stagnant fluids, returning the body to a healthy flowing state. Like many of our herbs, the potential for elecampane goes far beyond its most common uses, as it likely has many more applications relating to stuck and boggy tissues.