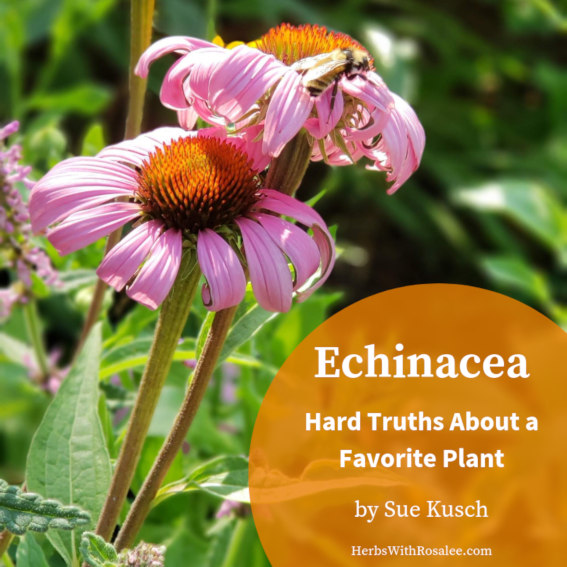 Gather a group of random people together and ask who has purchased or used an echinacea plant product at least once. I suspect that a majority will say they purchased an over-the-counter (OTC) cold and flu product that included echinacea in its ingredients. Since the 1980s echinacea products have been successfully marketed and sold to the American public as both an immune system supplement and cold and flu remedy.1 As it has gained a “superherb” status, it’s also been (inexplicably) added to beauty products like shampoo.

People often turn to herbal remedies because they want to reduce harm. However, when herbs reach celebrity status, the demand can quickly overcome the supply. The continued practice of marketing native medicinal plants as a super herb or panacea for health conditions is a contributing factor to the declining and endangered populations of North American native medicinal plants.

For many, being an herbalist isn’t simply about memorizing the health benefits of herbs. It’s also about being connected to the plants by knowing their history with humans, their growth patterns, habitat, and the many ways they play an interconnected role in their environment.

Getting to Know the Echinacea Plant

Native to the central plains of North America, the genus Echinacea hosts nine species of which at least three have been traditionally used for a host of different health conditions by both indigenous people and, later, the European explorers and settlers. Anthropologist and author, Daniel E. Moerman, records the diverse uses of E. angustifolia, E. pallida (Pale Purple Coneflower) and E. purpurea (Eastern Purple Coneflower) among many of the Plains tribes in his book, Native American Ethnobotany.

Back then, the echinacea plant was best known as a blood cleanser, a remedy for all kinds of poisonings, an analgesic for pain, and even did a stint as a “snake oil” remedy. Animals also benefit from the healing properties of this genus: the Ute Indians call echinacea “elk root” because they observed elk using their hooves to dig up the roots of coneflower plants. The USDA noted that all types of livestock foraged echinacea while grazing. During the 1880s, Oklahoma ranchers added dried and chopped echinacea root to the feed for sick livestock.2

It was the Eclectic School of Medicine, prominent during the latter half of the 19th century in the US, that initiated research into the echinacea plant’s medicinal applications, and it was during this reign of popularity that heavy harvesting of the wild plants began. The echinacea plant was popular in the early 20th century in both North America and Europe, and then mostly disappeared from the North American home medicine cabinet as the allopathic medicine system gradually abandoned botanical medicines and pharmaceutical companies developed a multi-billion dollar industry of OTC products.

Meanwhile, throughout the first half of the 20th century, Germany maintained its herbal traditions, including the continuing use of the echinacea plant, conducting research on echinacea, and developing herb farms dedicated to growing Echinacea purpurea.

In his book, The Healing Power of Echinacea & Goldenseal, Paul Bergner explains that knowledge about the human immune system was limited until the 1970s. The AIDS epidemic in the 1980s prompted a dramatic increase in research on the immune system, which likely included some historical review of past uses of herbs. Coupled with the renewed interest in Western herbal traditions started in the 1960s, specifically those of the American Eclectic school of medicine and Germany’s continued research, echinacea found its way back to the American medicine system.3

Loving the Echinacea Plant to Extinction

You only have to watch American television for a few hours to see that the pharmaceutical industry markets both OTC products and prescribed drugs heavily. It’s a lucrative strategy: in 2018, sales of OTC cold and flu products topped over 7 billion dollars in the US.4

When medicine is a business, marketing is key to its success and is based on trends and consumers’ willingness to purchase a product. Worldwide, consumers have increased acceptance of “natural” products over the last five decades and both the pharmaceutical and supplement industries have paid attention, resulting in tremendous growth in herbal product consumption.5

The increased demand for herbs can be easily triggered by research reports, targeted marketing by health industry companies and, more recently, by television personalities like Dr. Oz. The Oz effect is a recent phenomenon that occurs when a medical professional uses the media to promote or recommend a particular herbal or OTC product and sales increase dramatically as a result.6 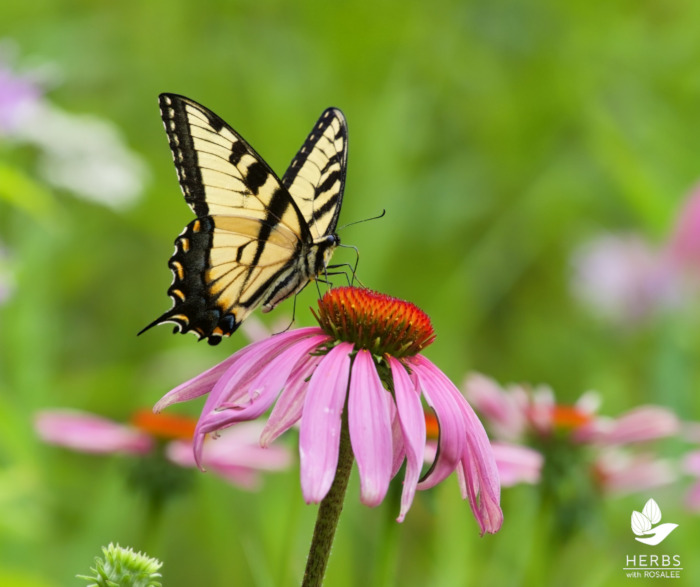 The Impact of the Unsustainable Wildcrafting of the Echinacea Plant

Wildcrafting echinacea plant species is both an economic opportunity and cultural tradition in rural areas. Historically, wild harvesting of native plants was done by generations of families who understood the importance of maintaining populations for future harvest but modern pressures have altered this practice: “Wild harvest appears to be driven by rapid increases in demand (associated with higher prices) that would be impossible to meet quickly enough with cultivation. There is a specific market demand for wild-harvested echinacea, particularly from small local companies and the European market.”7

With herbs in particular, an immediate increase in demand increases pressure on wild harvesting of native plants species, including related species that may or may not offer the same medicinal powers. In the case of the echinacea plant, two species (E. tennesseensis & E. laevigata) were overharvested and likely used or sold as another species. Both of these species are currently federally listed with the US Fish & Wildlife as “in recovery” and “endangered” respectively. 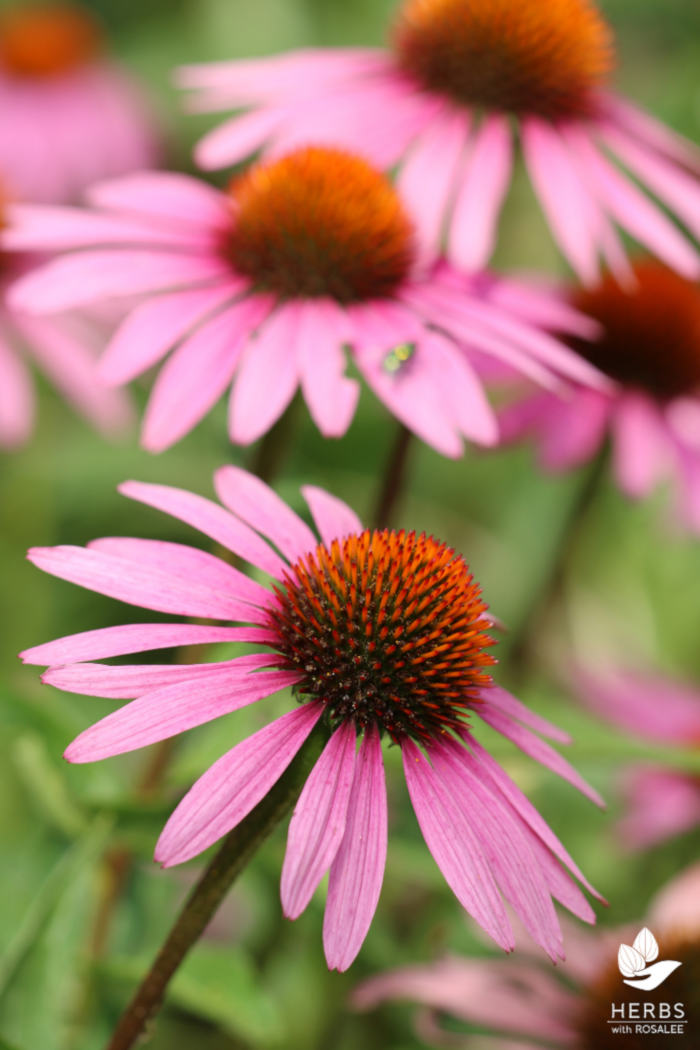 Throughout the latter half of the 20th century, American agriculture was plowing up the diverse native prairies of the central Plains (the endemic region of several Echinacea species) and replacing them with vast swaths of fields growing grains. Today, it’s estimated that only 1% to 18% of tallgrass native prairies remain.8

Though much of echinacea’s native habitat has been converted to farmland, pockets of wild populations of all echinacea species exist but face additional pressures from mismanagement, including overgrazing, prevention of natural fire cycles, the use of herbicides, unregulated harvesting and recreational use.

Sadly, increased demand also promotes adulteration of herbal products. Adulteration is the act of reducing the quality and/or efficacy by substituting or adding another substance and is an ongoing problem with herbal products from all over the world.

During the 20th century, the root of Parthenium integrifolium was commonly sold as or added to echinacea root products. Over the last few decades, numerous tests have been done on echinacea single herb products to determine if they actually contained what their label identified and results of one study showed that less than 50% of the retail samples examined contained the echinaceas species that was listed on the label.9

These factors have contributed to the decline of many native medicinals and threaten many others. But the good news is that a non-profit, United Plant Savers, founded by Rosemary Gladstar and other concerned herbalists was started in 1994 and has become an important player in the conservation of North American medicinal plants. They offer educational resources, learning and internship opportunities and maintain a Species At-Risk List that utilizes a unique assessment tool as its methodology for determining the status of each plant.

One way to avoid adulterated herbs and to support the sustainability of echinacea is to grow it yourself!

If you forgot to do this and spring is arriving, then place the seeds in a flat container with sand and put in a plastic bag. Store it in the refrigerator and check it every couple days until the seeds begin to germinate. Than transfer the seeds either to small pots or plant directly in the garden bed. Germination rate is around 50% so double the amount of seeds needed for the number of desired plants. Plant potted seedlings in late spring after the last frost date.

And read this article to learn more about many Echinacea uses. 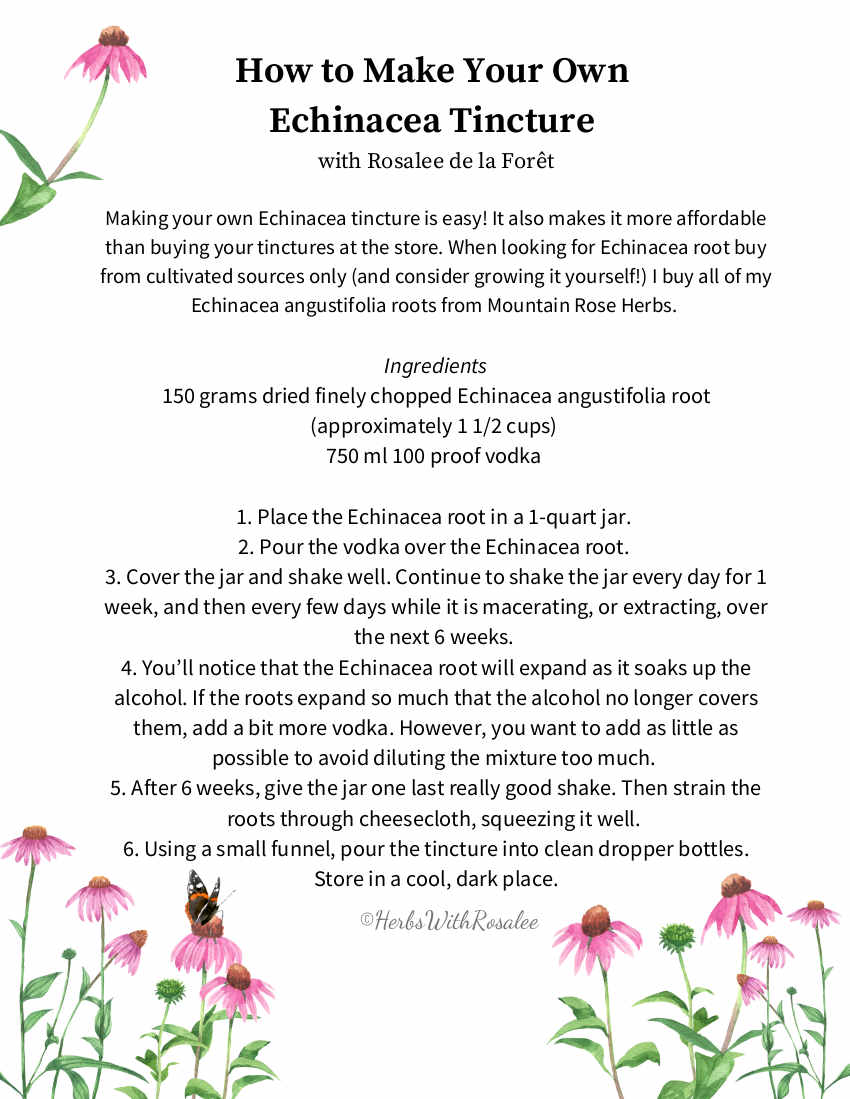 Citations for the Echinacea Plant