When I started studying medicinal herbs, I looked first to the culinary herbs I was already growing and then explored the surrounding open spaces for both native and nonnative plants that were used medicinally. Though I already knew about chamomile tea benefits and kept a small jar of tea bags in the pantry for the occasional cup of tea after a tense day, I assumed that I knew all that I needed to know about chamomile.

Like many people, chamomile was my introduction to herbal teas, and I understood that it had a long history of use for easing tension and indigestion. But, I must admit, I considered chamomile a “simple” herb that provided basic services, and never invested any time in getting to know the many other chamomile tea benefits.

When I decided to devote a garden bed to growing my own supply of dried chamomile, I discovered there were different species, commonly referred to as German and Roman chamomile. I wasn’t sure what species I had been drinking but soon discovered that German chamomile (Matricaria chamomilla) is usually the species used for tea because it is far less bitter than Roman Chamomile (Chamaemelum nobile). A low-growing perennial, Roman chamomile is a different species that has been used interchangeably with the annual and upright-growing German chamomile for both tea and medicinal uses. However, there is far more scientific research on Matricaria chamomilla as a medicinal herb.

Chamomile Tea Benefits in the Garden

Many herbalists have stories about how an herb makes its useful presence known and this is one of my stories: The same year that I decided to grow German chamomile, I found a fungus growing on several of my veggie seedlings in my greenhouse. I did a quick search in an older organic gardening book for a remedy that would kill the fungus and not harm the seedlings and chamomile tea was listed as an old-time remedy. I steeped a quart of chamomile tea for an hour and drenched (via a sprayer) the affected seedlings and applied to nearby seedlings that were not affected. The results were amazing: I lost a few seedlings that were badly affected, but the ones with minimal infection survived and thrived. None of the seedlings I sprayed preventatively became infected.

Researching the historical uses of both species, I discovered that chamomile was used to soothe and heal itchy skin conditions and, because of its antimicrobial properties, it made a great wash for wounds, burns and rashes. German chamomile’s anti-inflammatory properties and mild taste made it ideal for inflamed and teething gums: soak a small piece of cloth in cooled tea and freeze it for a soothing teething ring. Chamomile is considered safe for children, and I chuckled a bit when I read herbalist Matthew Wood’s description of chamomile as an herb for “Babies of any age...petulant, self-centered, intolerant of pain or not having their way, inclined to pick quarrels, yet averse to being touched, soothed or spoken to.” (Wood,178)1

Sluggish digestion is a common complaint in our culture and one of the reasons why is that many of us have eliminated bitter foods from our diets. The bitter taste is responsible for igniting the digestive process, and herbal bitters taken before or after a meal can stimulate the digestive juices. I began to explore herbal bitter recipes and am currently enjoying a batch of the Chamomile Whisky Bitters recipe in herbalist Emily Han’s Wild Drinks and Cocktails book.2

Digging a bit deeper into recent research, I found that Matricaria chamomilla is being investigated for a wide range of health conditions. In one study, researchers concluded that regularly drinking chamomile tea over long periods of time may protect the thyroid from benign disease and cancer.3

General Anxiety Disorder(GAD) affects millions of Americans and prevents those affected from completing daily activities and living a full life. A 2016 study suggested that chamomile significantly reduced the stressful symptoms of GAD.5 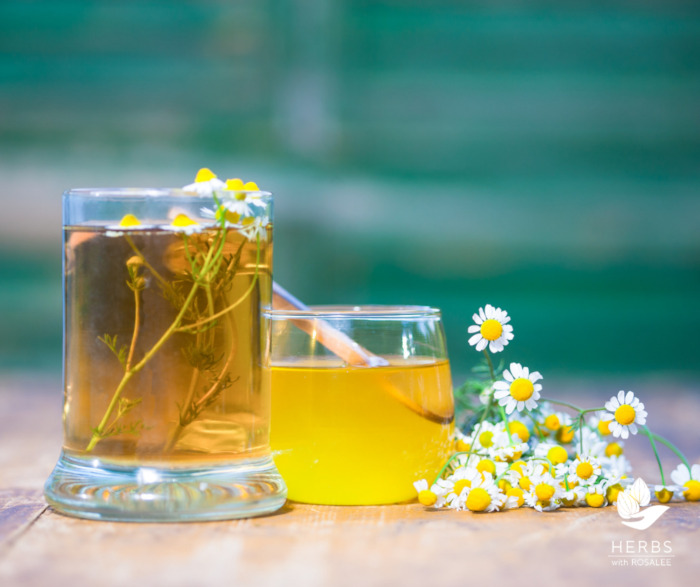 Often we overlook the simple solutions or are distracted by the hype of an exotic herb, bypassing some of the oldest and most powerful medicine that has been sitting in our pantries for years. Simple chamomile deserves more attention so treat yourself to a soothing cup or two of chamomile tea daily.

Sink into the comforts of chamomile with this simple and tasty preparation.

Steep the chamomile flowers in hot water for 3-5 minutes, covered.

Reach for this recipe when you need the deep gifts of chamomile. Consider it for spasmodic pain such as back pain or menstrual cramps or when there is a fever accompanied by aches, pains and a headache. While this brew is bitter, you'll soon feel those deeply relaxing properties.

Steep the chamomile flowers in the hot water for 15-20 minutes, covered.

Strain and drink slowly while warm. This tea is best when drank very slowly as the bitterness can cause nausea if drank too fast.

Here's a printable recipe card for the recipes above: 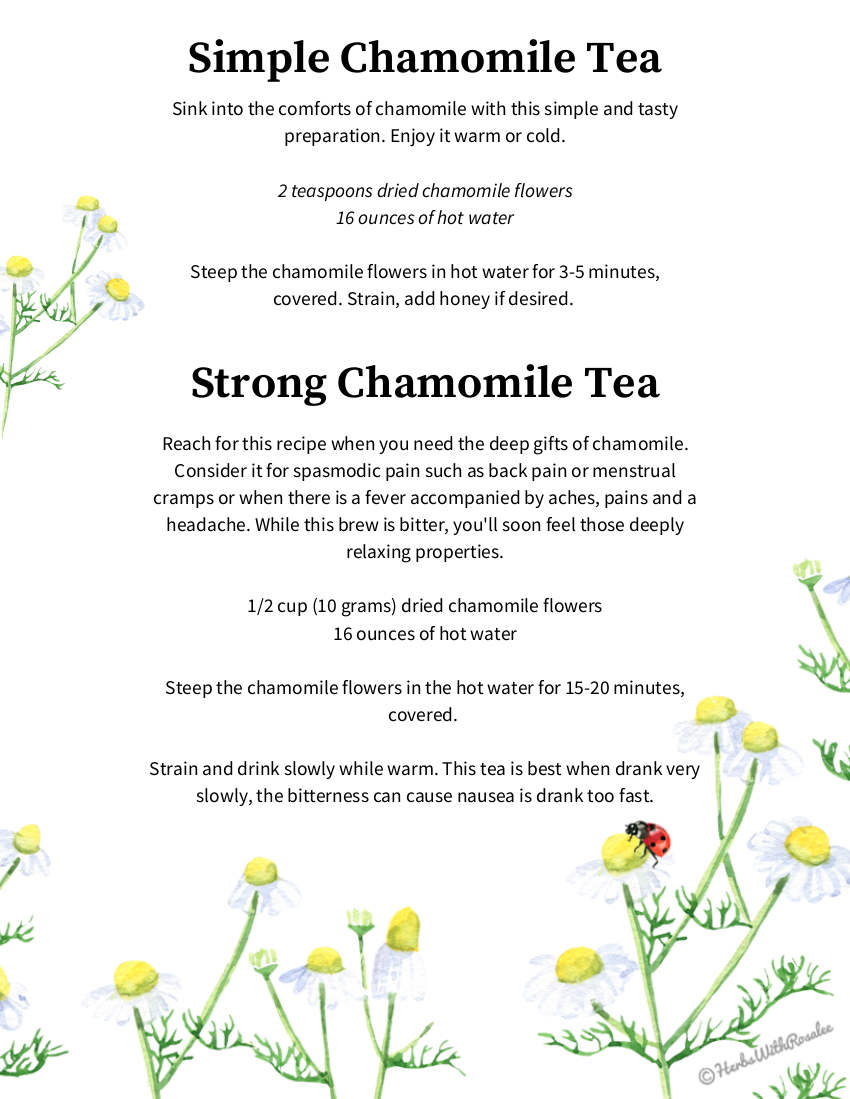