What Does the Liver Do?

During our study of the digestive system, we briefly explored the function of the liver. The following article provides a more in-depth look at the liver, including What does the liver do? Where is the liver located? and a general anatomy of the liver.

Anatomy of the Liver

The liver is the largest abdominal organ in the human body. Where is your liver? It is located mainly on the right side of the body, just below the diaphragm, and can weigh around three pounds in an adult. It is made up of three non-symmetrical lobes and almost completely engulfs the gall bladder. The two primary lobes are the right and left lobe, with the right lobe being much bigger.

The lobes of the liver are a series of functional units called lobules. Lobules are formed by many liver cells called hepatocytes. Instead of capillaries, the liver has sinusoids where blood passes through. These sinusoids also contain Kupffer’s cells that destroy worn-out white and red blood cells, bacteria, and toxic substances in a process called phagocytosis. The process of breaking down red blood cells creates iron, globin, and bilirubin. Some of the bilirubin is excreted in the bile and gives the feces its characteristic brown color.

The liver also receives oxygenated blood from the hepatic artery.

That is a very basic explanation of the anatomy of the liver. Now, let's look at what does the liver do? 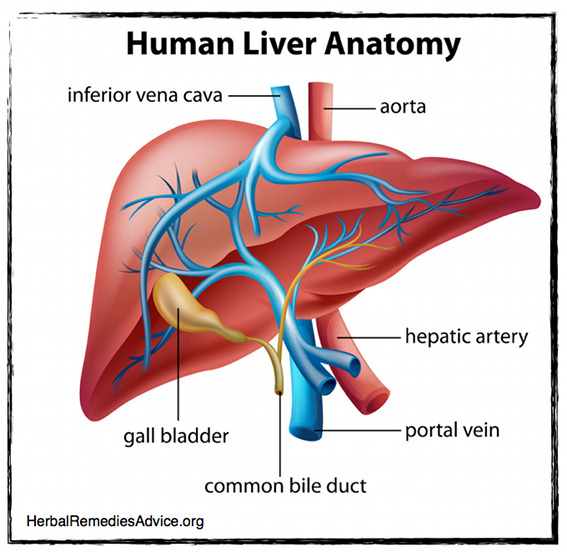 What Does the Liver Do?

According to the book Principles of Anatomy & Physiology, these are the function of the liver:

We will discuss each of these briefly to give a fuller understanding of how the liver functions and how herbs can affect the health of the liver.

What Does the Liver Do? A Closer Look

Let's take a closer look at the main liver functions.

Excretion of Bile and Synthesis of Bile Salts

As previously discussed in the digestion article, the liver produces bile. Bile is partly digestive juices and partly the liver’s way of discarding waste materials in the body. It consists of water, bile acids, bile salts (sodium and potassium), cholesterol, lecithin, bile pigments, and several ions. Bile salts and bile acids are key players in breaking down or emulsifying the fats that we consume.

Going back once again to my digestion article, you’ll remember that once the nutrients are broken down into small enough molecules they are absorbed (mostly) through our small intestine and into our blood stream. These nutrients then flow into the hepatic portal vein. The hepatic portal vein is a collection of joined veins that collects nutrient-dense blood from the spleen, pancreas, stomach, small intestine, and large intestine and then brings it to the liver. It is then the liver’s job to further metabolize these nutrients, remove toxins, store vitamins, and send other nutrients to various parts of the body through the circulatory system.

Ever wonder why breakfast is the most important meal of the day? The answer lies within the physiology of your liver. If you skip breakfast your blood sugar will drop and your liver will run out of glycogen by the middle of the morning, and will therefore not be able to maintain a healthy blood sugar for you body. That, in short, means no more energy.

The liver takes in proteins and breaks them down into amino acids that can then be used to build and repair tissue. Some of these amino acids, such as ammonia, is converted into urea, which is then filtered from the body by the kidneys.

Storage of Vitamins and Minerals

Part of the function of the liver is to store vitamins and minerals until needed at a later time. It specifically stores vitamins A, B12, D, E, and K, and the minerals iron and copper.

The skin takes in ultra violet light and produces a molecule that is then modified in the kidney and liver to create calcitriol, the most active form of vitamin D. Because vitamin D is produced in the body and then transported to another part where it exerts its action, vitamin D is actually a hormone, not a vitamin.

Removal of Drugs and Hormones

The liver is able to remove drugs, hormones, and other toxins from the blood by either secreting them into the bile, chemically altering them into less harmful substances or, if the liver is overwhelmed with its tasks, it sends the material to be stored in adipose (fat) tissue.

Summary of What Does the Liver Do?

The liver is an amazingly regenerative organ that is responsible for many functions in the body. If it has been damaged by excessive abuse (alcohol, drugs, environmental poisons), congenital disease, or a viral infection (hepatitis), it will need special attention and care in order for the body to maintain health.

Learn how you can take good care of your liver here.

I hope this article has helped you understand what does the liver do?!