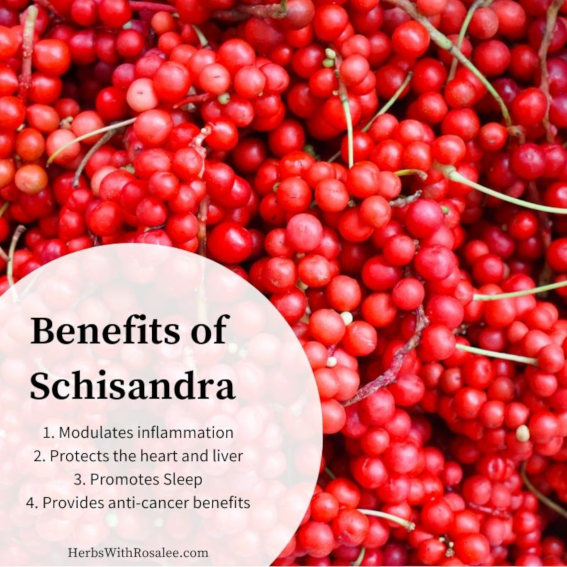 Treasured in Chinese, Japanese, and Korean medicine for thousands of years and heavily studied by the Russians in the past 70 years, schisandra benefits are becoming increasingly popular in Western herbalism. Growing on a long trailing vine, tens of tons of berries are harvested each year for use in herbal medicine as well as sweet treats.

Schisandra is a berry of many gifts! It can promote sleep for the insomniac, restore vitality to the debilitated, and protect many organ systems, including the liver, heart, and skin.

Schisandra offers many powerful actions for a wide range of health challenges. This easily leads to the question, how does schisandra do it all?

We could explain its effects through its chemical constituents (e.g., gomisin, schizandrin, schizandrol, schisanlactone, lignans). We could also understand it through different herbal actions, such as adaptogen, hepatoprotective, immunomodulatory, etc.

But there is another unique property of schisandra that reveals its widely varied uses: the way it tastes.

“Really?”, you might ask, “Can we explain how an herb works simply by its taste?”

In both Chinese Medicine and Ayurveda, the taste of an herb is an important way to understand how it works in the body. In Chinese Medicine there are five tastes, including pungent, salty, sour, bitter, and sweet. Herbs that predominantly have one flavor will have the general characteristics and actions of that particular taste.

Schisandra is a special herb in that it has all five tastes. In herbal theory that means it contains the qualities and benefits of all five flavors. This explains why it does so many things!

While schisandra contains all five tastes, its predominant flavor is sour and the berries are quite astringent.

Developing your sense of taste and understanding how to interpret those tastes is one of the most important tools an herbalist can acquire. For this reason, schisandra is a fun herb to explore since it contains all the different tastes. 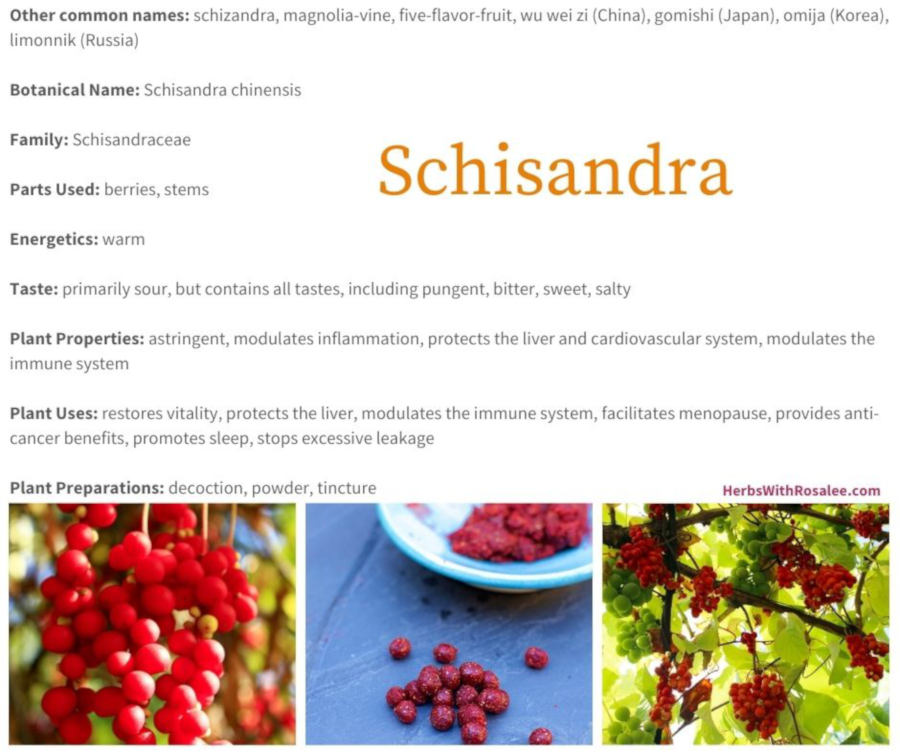 Schisandra Benefits as an Adaptogen

The term adaptogen was coined by Russian Dr. Nikolai Lazarev in 1947 and was more thoroughly defined in 1968 as an herb that helps a person adapt to stress by having a normalizing effect on bodily processes. Adaptogenic herbs are used in Western herbalism to broadly nourish and strengthen those who are weak or chronically stressed or fatigued.

Schisandra has been used in Chinese Medicine for centuries and is considered a Qi tonic, which is a term for generally building and nourishing herbs. “Adaptogen” and “Qi tonic” are similar ways of describing schisandra’s restorative effects, although the actions may differ in culturally nuanced ways.

Schisandra is a restorative herb that is commonly used to build strength in people who are feeling chronically worn out. It is also used to promote sleep in people with insomnia, especially when someone is feeling stressed or anxious or “too wired to sleep.” Herbalist and author Alan Tillotson considers schisandra to be an herb that balances the sympathetic and parasympathetic nervous systems. It calms chronic stress and relieves anxiety (sympathetic states) and helps to promote sleep (parasympathetic state).1

When combined with the adaptogens rhodiola (Rhodiola rosea) and eleuthero (Eleutherococcus senticosus), schisandra has been shown to improve cognitive function in women who reported feeling stressed for a long period of time.2

Schisandra has also been shown to benefit healthy people. In one review, the authors report: “In healthy subjects, Schizandra increases endurance and accuracy of movement, mental performance and working capacity, and generates alterations in the basal levels of nitric oxide and cortisol in blood and saliva with subsequent effects on the blood cells, vessels and CNS.”3

One way that schisandra restores the body is by modulating inflammation, an action which ends up protecting the brain, skin, liver, cardiovascular and other organ systems.

Schisandra has long been used in Chinese Medicine to protect the liver. Several studies have shown schisandra to have protective qualities for the liver. In one randomized, parallel, and placebo-controlled study, patients taking schisandra had significantly improved liver blood tests as well as significant improvements in nonalcoholic fatty liver disease (NAFLD) compared with those taking a placebo. The same study also showed significant improvements in antioxidant status and inflammatory markers.5

In China, schisandra is commonly prescribed for liver injury induced by pharmaceutical drugs. A review of studies confirmed that schisandra can address some of the problems associated with liver injury due to pharmaceutical drugs, specifically by “inhibiting drug-induced elevation of serum levels of alanine aminotransferase, aspartate transaminase, and total bilirubin.”6

Chinese medicine uses a combination of schisandra, ophiopogon (Ophiopogon spp.), and ginseng (Panax ginseng) to dramatically and positively affect heart health. According to Subhuti Dharmananda, Ph.D., Director of the Institute for Traditional Medicine, “The formula is administered to patients who have suffered a serious [cardiovascular] illness, especially heart attack and congestive heart failure.”7

Schisandra has also been shown to protect the brain. Researchers have shown that schisandra’s key neuroprotective mechanisms “include antioxidation, suppression of apoptosis, anti-inflammation, regulation of neurotransmitters, and modulation of brain-derived neurotrophic factor (BDNF) related pathways.”8 A review reports that “experimental findings support the extracts and lignan components from schisandra can be used as new therapeutic agents to treat various neurodegenerative diseases.”9

An in vitro model showed that extracts of schisandra mediated the inflammation associated with acne. The researchers concluded that it may be “a novel agent for acne therapy and photoageing prevention.”10

Schisandra strengthens the lungs and can be used for chronic coughing or general lung weakness, although it is not used for acute lung conditions or lung “excess” conditions. In Chinese Medicine it is a part of a famous formula, Minor Bluegreen Dragon Decoction (xiao qing long tang), where Bensky et al. explain that it “acts in concert with a number of other herbs that drain, disperse, and dry to treat cough and wheezing due to cold, thin mucus, and it cannot be used as a stand-alone herb to stop coughs."11

Studies have shown that a schisandra extract can suppress the histamine response and modulate inflammation, making it a potential ally during seasonal allergies.12 Its astringent and tonifying actions make it well-suited for lax mucous membranes that chronically leak fluids (i.e., runny nose, tearing eyes). I once worked with someone who had excessive eye tearing and nose dripping as a primary complaint and, after trying a number things, it was schisandra that finally worked.

Schisandra has also been shown to strongly support the immune system, even in cases of severe infection such as hepatitis B virus (HBV).13

To date there have only been in vitro studies on schisandra extracts. I look forward to seeing the results of human clinical trials, which will be more definitive in assessing its abilities.

Schisandra is notably astringent, helping to tonify lax tissues that may be experiencing leakage. This quality has many different benefits and shows up in many of the ways that schisandra berry is traditionally used.

Schisandra berry is often used for the following conditions:

BMO-30, an extract from Schisandra, has been shown to be “a safe and effective complementary medicine for menopausal symptoms, especially for hot flushes, sweating, and heart palpitations”.16 This is another example of how schisandra’s astringency and multiple flavors help to naturally support the body’s processes. 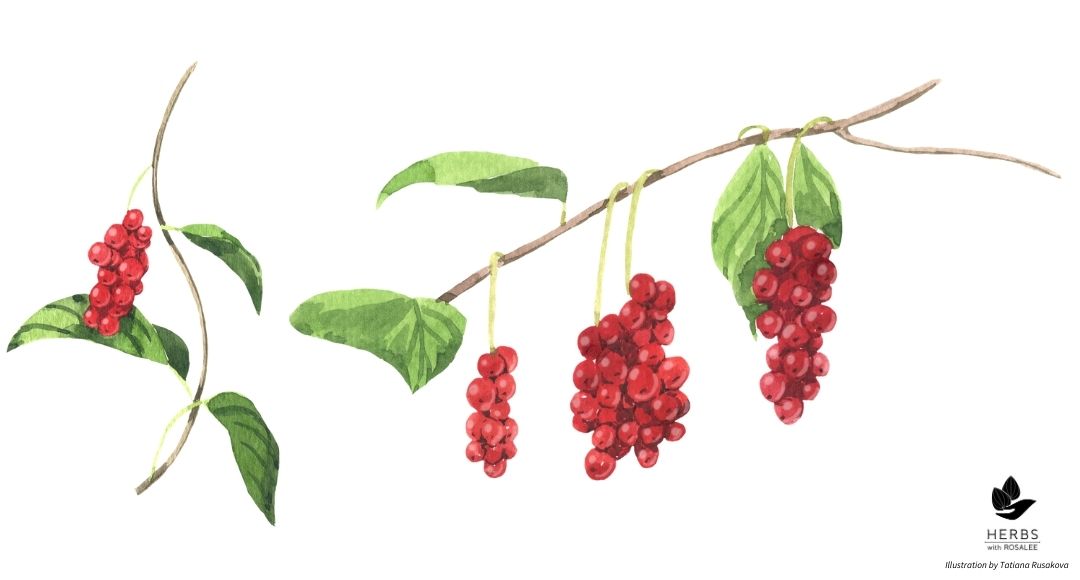 Schisandra is native to China where several species can be found.

It grows as a hardy woody vine in zones 4-9. It prefers shade with damp soils and can grow to twenty feet.

The plant has white-to-pink flowers that attract butterflies and other pollinators.

Herbalists most often use the dried fruit, although several studies have shown promising results using the stems.

Schisandra plants share habitats with pandas and other sensitive species. If you are buying wild-harvested schisandra berries from China, only buy products carrying the FairWild Certification and Giant Panda Friendly Products Standard.17 This hardy vine is being increasingly cultivated around the world for its medicinal fruits.

Schisandra is commonly used as a decoction (simmering the dried berries). Simply infusing the berries in hot or cool water is a pleasant tea, but may not be as medicinally potent.

It is commonly used as a tincture (alcohol extract) in Western herbalism.

The berries are made into a variety of foods and candies.