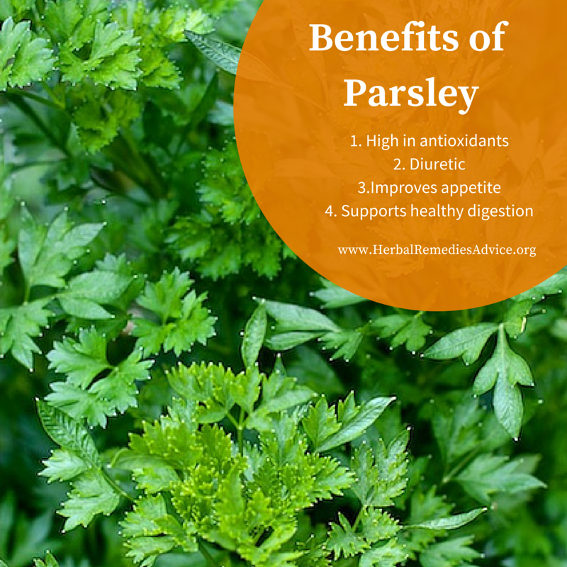 It’s unfortunate that many folks are so intent on finding the next exotic herb and spice in far-away lands that our seemingly common kitchen herbs rarely get the respect they deserve. Parsley herb is a prime example of that!

Oftentimes parsley is simply thought of as a garnish herb to make a dish look more appealing. But few realize that eating a handful of parsley or drinking parsley tea frequently is good medicine. In this article we’ll look at the specific ways parsley herb is used medicinally as well as the benefits of eating it regularly to prevent diseases.

Health Benefits of Parsley Herb as a Food

The medicinal benefits of parsley herb can be partially attributed to its nutrient content.

If you want to get the most medicinal benefits of parsley as food, forget simply eating a small sprig once in awhile. Instead, eat large amounts of fresh parsley in salads and sauces.

Parsley is really high in nutrients, notably Vitamin C and Vitamin A. It is especially high in Vitamin K, which is strongly tied to heart health and healthy bones.

Now that you know the amazing qualities of parsley you'll probably want to know how to make a tasty parsley recipe.

I have two favorites ways of enjoying the benefits of parsley.

The first is parsley pesto. Basically, to make this parsley recipe you make a basic basil pesto but substitute the basil for parsley. You can see a complete parsley pesto recipe here.

My other favorite way to enjoy parsley is a tabouleh salad. This parsley recipe includes lots of other nutritious vegetables. I like to make mine with quinoa so that it's gluten free as well. You can see my entire tabouleh parsley recipe here. 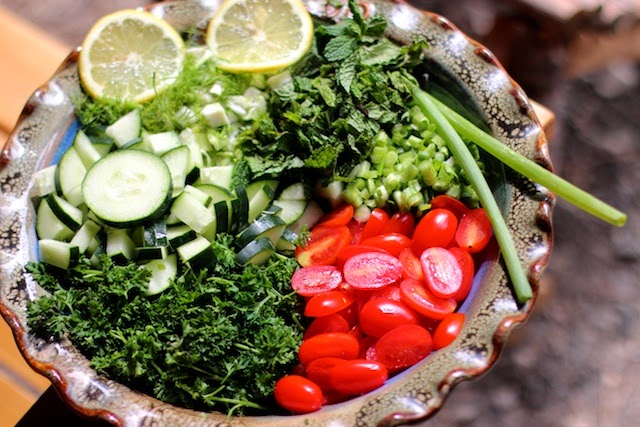 Ingredients for tabouleh: A parsley recipe

Health Benefits of Parsley Herb as a Diuretic

As a medicine, parsley herb is best known for its effects on the urinary system. Parsley leaves and roots are used as a diuretic and have been used for a variety of ailments in which increased urination is beneficial, including urinary tract infections, kidney stones, cystitis, edema and, historically, it was used for gonorrhea.

Parsley roots have a stronger diuretic action than the leaves and are typically taken as a strong decoction or tea.

An infusion of parsley is beneficial when, with nephritis or cystitis, the specific gravity of the urine is high, and the urination painful and irritating to the mucous membranes. It is useful in gonorrhea and strangury, with great irritation of the parts, with heat, or a scalding sensation on passage of urine, and can be given during the inflammatory stage. It has also been given in dropsy with good results.  - Finley Ellingwood, American Materia Medica, Therapeutics and Pharmacognosy, 1919

Health Benefits of Parsley Herb as a Carminative

Besides sprucing up your dinner plate, parsley herb is also used as a garnish herb because it can help with poor digestion. Have bad breath? Try fresh parsley. Have signs of stagnant digestion such as bloating, constipation or gas? Try eating parsley. Maybe you have trouble finding a good appetite, then try eating a few sprigs of parsley before the meal is served.

Fresh parsley (especially the flat-leafed variety) is great for digestion on its own. It can also be paired with fennel to relieve more severe cases of stagnant digestion.

Health Benefits of Parsley Herb as an Emmenagogue

Parsley has a mild ability to stimulate uterine contractions and can be used to promote menstruation in delayed menses or amenorrhea (lack of menstruation). (Often times there is an underlying hormonal issue that also needs to be addressed.)

Because parsley herb can stimulate uterine contractions it is not recommended in large doses during pregnancy. Although we don’t have any actual case studies showing a strong abortive effect it’s better to take a conservative stance on using parsley during pregnancy.

In the quote below Ellingwood discusses the use of parsley essential oil for amenorrhea and dysmenorrhea (painful menses):

Apiol is a specific in amenorrhea. Five or six minims in a capsule, three times daily, for six or eight days before the menstrual epoch will restore the flow in many stubborn cases. It has no marked abortive influence. In persistent dysmenorrhea it has cured many cases intractable to other agents.  - Finley Ellingwood, American Materia Medica, Therapeutics and Pharmacognosy, 1919 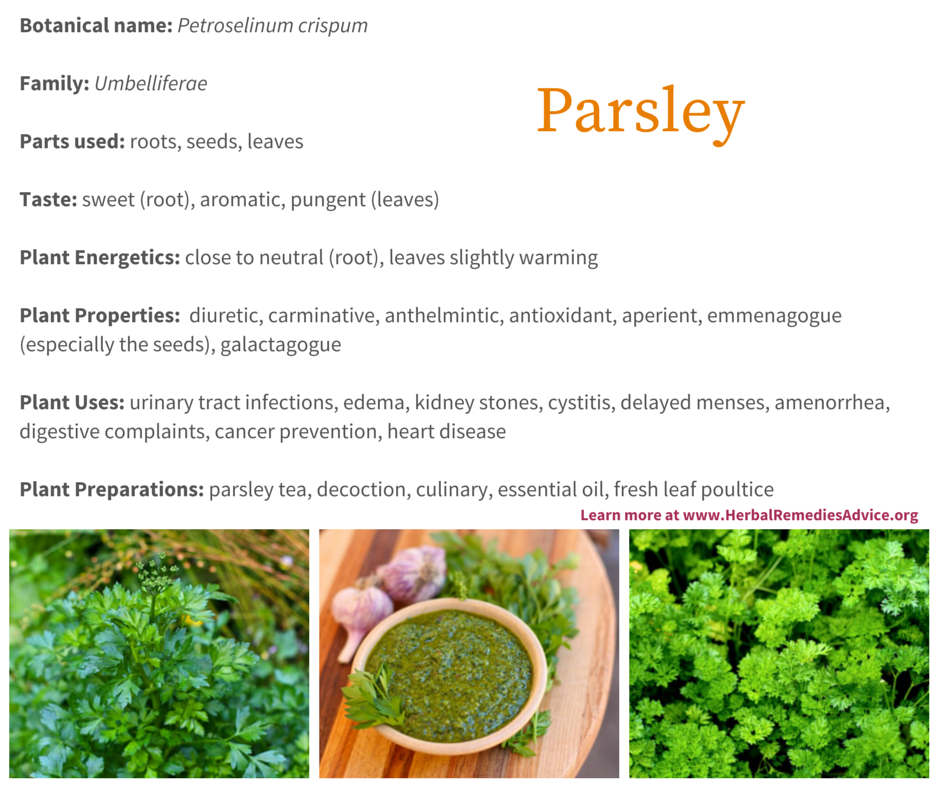 I don’t hear of many herbalists using parsley externally today, but there are many references in our older herbals using fresh parsley leaf poultices. Different herbals recommend it for eczema, insect bites, dandruff, inflamed eyes, sprains and enlarged glands.

The seeds as well as the leaves, sprinkled on the hair, in powder, or in the form of an ointment, will effectually destroy vermin; the leaves, applied as a fomentation, will, it is asserted, cure the bites or stings of insects. The leaves, bruised, are a good application to contusions, swelled breasts, and enlarged glands—reputed to "dry up the milk" of wet-nurses.  - King’s American Dispensatory, 1898

The Leaves of Parsley laid to the Eyes that are inflamed with heat or swollen, doth much help them, if it be used with Bread or Meal.
- Culpepper, The English Physician, 1652

Health Benefits of Parsley Herb for Inflammation and Heart Disease

Dr. Bharat Aggarwal, in his book Healing Spices, describes parsley as being an “antioxidant helper.” He says that, not only is parsley high in antioxidants and flavonoids, it has also been shown to increase the benefits of other antioxidants.

We have a growing awareness that chronic inflammation in the body is a root cause of many different chronic diseases, including heart disease and cancer. Eating foods high in antioxidants, like parsley, is one way we can prevent oxidative stress.

Parsley is also used to support cardiovascular health. It’s used for hypertension (most likely due to its diuretic effect). It’s also been shown to reduce platelet aggregation, thus reducing clots that can cause heart attacks and strokes.

According to a Pubmed article, “In Morocco, Parsley is mostly used as an elixir to treat arterial hypertension, diabetes, cardiac and renal diseases.”

Here’s an old recipe using parsley as a cardiovascular tonic.

St. Hildegard of Bingen wrote about the tonic effects of parsley on the cardio-vascular system in the 12th century. A recipe for parsley wine that’s been passed down is:

Put all the ingredients except the honey together into a soup pot. Boil for 10 minutes then add 9 ounces of honey.

Strain and pour into bottles. Take 1 tablespoon 3x a day. 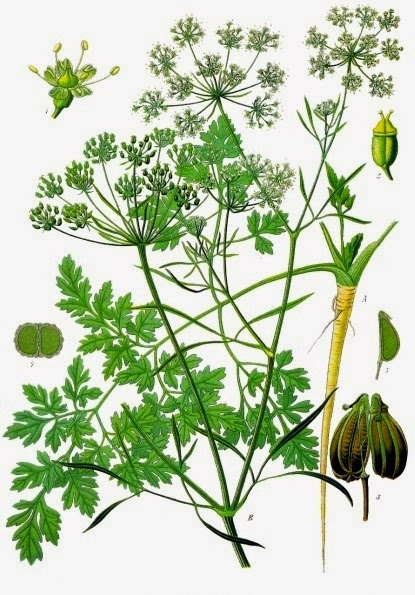 The Botany of Parsley

Is dried parsley effective? Dried parsley leaf can be effective, but parsley is best used fresh. It’s easy to grow in your garden and can also be found in grocery stores all year round.

If you really want to use dried parsley for making parsley tea be sure to use good quality parsley, either by drying it yourself or by ordering it from a reputable company such as Mountain Rose Herbs.

Since parsley is typically served as one sprig on the dinner plate we tend to think that is a good serving size. Not even close!

In our house we make an effort to get as much parsley herb in our diet as we could possibly enjoy. During the hot summer months we make salads that are at least half parsley leaves. We also like to include liberal parsley garnishes with all of our meals (think small handful rather than sprig).

Parsley root can be used as a parsley tea or decoction.

In his Culinary Herbalism course, herbalist KP Khalsa recommends 1-4 ounces of the fresh juice for kidney stones or as a diuretic.

Apiol is the name given to parsley seed essential oil. (I do not have experience with this preparation.)

When buying parsley look for vibrant green bunches without any wilted or yellow leaves. When home, cut 1/2 inch from the bottom of the stems and then store in a glass with a bit of water until ready to use.

Parsley leaves and parsley roots are considered safe for most people. The leaves, roots, seeds and essential oil should be avoided in large amounts during pregnancy and lactation.

Rarely, parsley may cause a photosensitivity rash in some individuals.

Parsley is a biennial plant in the parsley family (Umbelliferae).

The first year it has a rosette of pinnate to tripinnate leaves. Curly leaf parsley and flat leafed parsley are both commonly found in grocery stores and gardens. (More on the differences between the two below.) 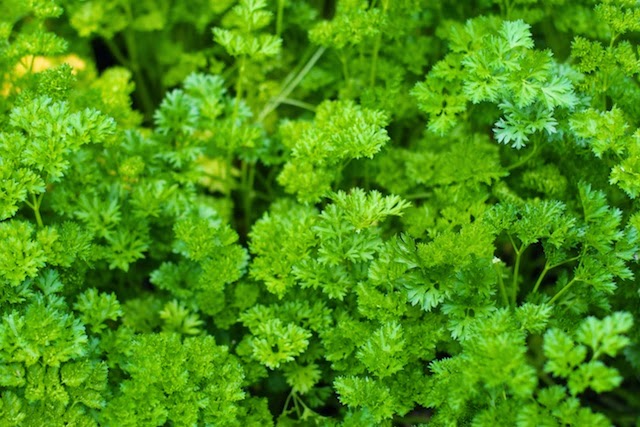 In the second year it produces an umbel flowering stem that may grow up to 1 meter tall. The flowers are pinkish to yellowish-green. 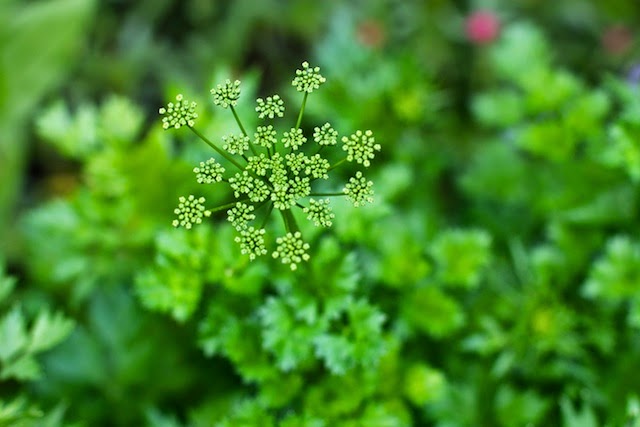 Parsley has a cream-colored taproot. 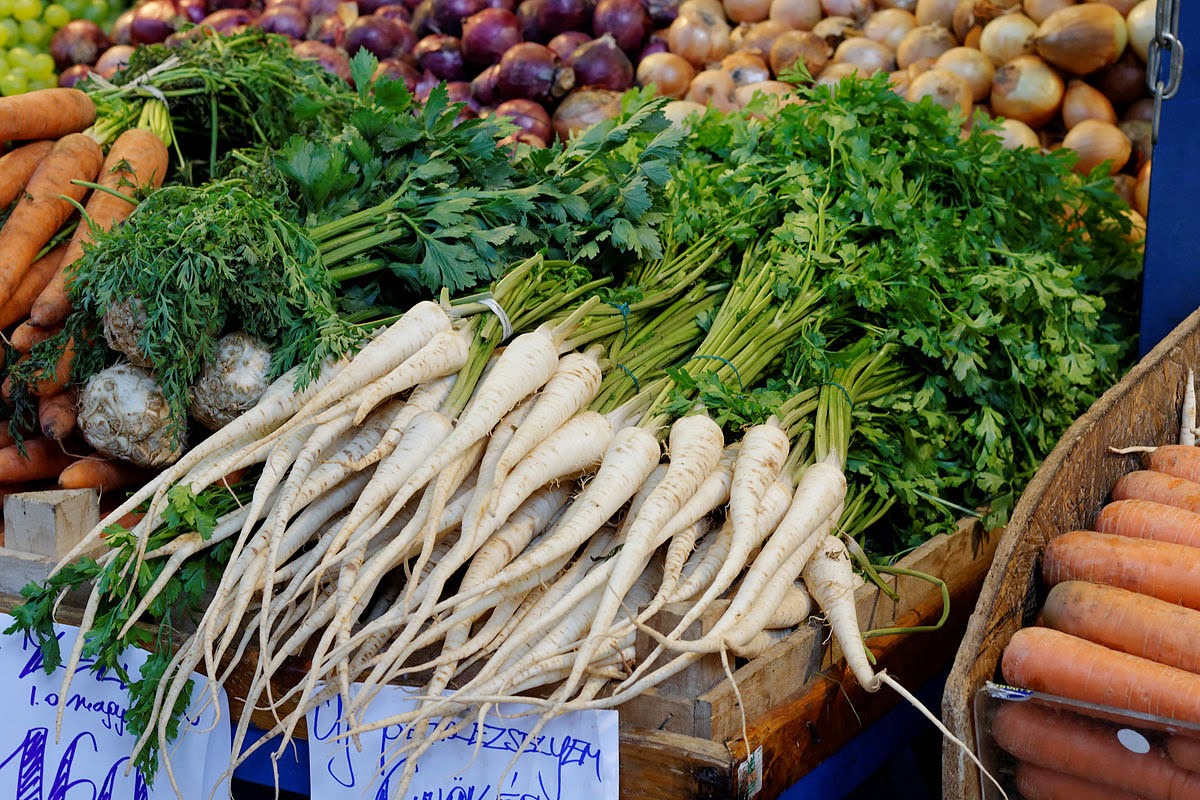 A Difference Between Curly Parsley and Flat Leaf Parsley?

If you know your parsley you might notice that there are two distinct kinds that are commonly sold. One kind has really curly leaves while the other variety has a flat leaf.

You can tell a lot about herbs by their taste and this is a perfect example of letting your taste sensation be your guide. If you get a chance taste each kind. Do they taste the same? (hint: they don’t!)

Here’s another taste question for you. Does the stem taste the same as the leaves? What’s the difference?

I’m going to let you discover the different tastes of parsley for yourself, but here’s a clue: parsley with a stronger aromatic and pungent taste is going to be stronger herbal medicine for digestion and diuresis.

Parsley is a readily available food and medicine that can be easily enjoyed on your dinner plate or in more specific medicinal preparations. While it is most commonly used as a diuretic and carminative herb, it can also be used daily to decrease oxidative stress. I hope this article inspires you to start enjoying copious amounts regularly.