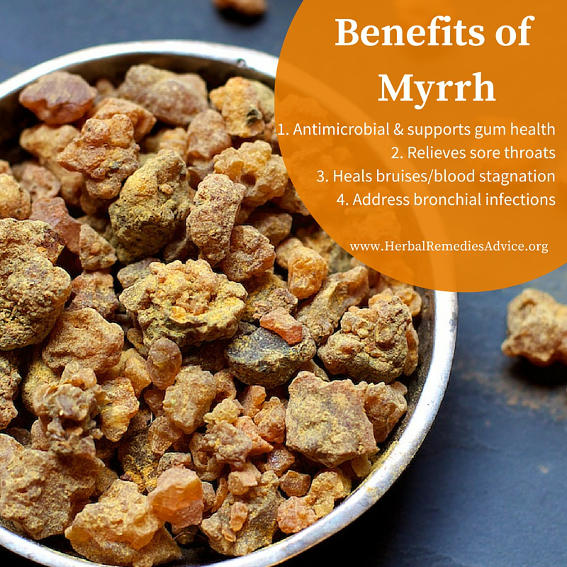 What Is Myrrh? What Are Myrrh Uses?

In the horn of Africa, a small native tree, covered in spines, grows in the arid deserts. When the bark is wounded through to the sapwood, the tree exudes an aromatic, oily, yellow oleo gum resin that eventually hardens into a hard yellow-reddish opaque globule that can be easily harvested. The resin has an evocative smell and has been widely used in ceremonies and as medicine. As a result, people have been intentionally wounding and harvesting from the myrrh tree since antiquity.

Myrrh has been famously revered by queens, kings, and wise men. Queen Hatshepsut of Egypt reportedly used myrrh as a perfume and in ceremonies and she sent out an expedition around 3500 B.P. to what is now Somalia in search of more myrrh.1 It has long been important in oils used in religious ceremonies and is mentioned in the Jewish, Christian, and Muslim texts.

While myrrh has several references in the Old and New Testament, those familiar with the Christian religion will recall it was one of the gifts brought to the birth of Jesus from the wise men. By the 7th Century, myrrh had made its way to East Asia, where it was favored and has remained an important part of the materia medica.

The aromatic and medicinal properties of myrrh have never lost favor, as it is still commonly harvested and used today. James Duke estimates that the U.S. annually imports anywhere from 5 to 20 tons of myrrh, while the U.K. annually imports around 30 tons.2

Myrrh is a bitter aromatic with warming and drying tendencies. It also moves circulation, dispelling stagnation.

Matthew Wood writes this about the specific indications for myrrh:

Myrrh gum is indicated by a pale, flabby, damp tongue. This symptom, with heaviness and indigestion, indicates relaxation of the gastrointestinal tract, with mucus in the stool; relaxation of the respiratory mucosa with phlegm in the lungs; a full congested feeling in the pelvis and clear vaginal discharge, reproductive relaxation, and so forth.
- Matt Wood, Earthwise Herbal: A Complete Guide to Old World Medicinal Plants 3 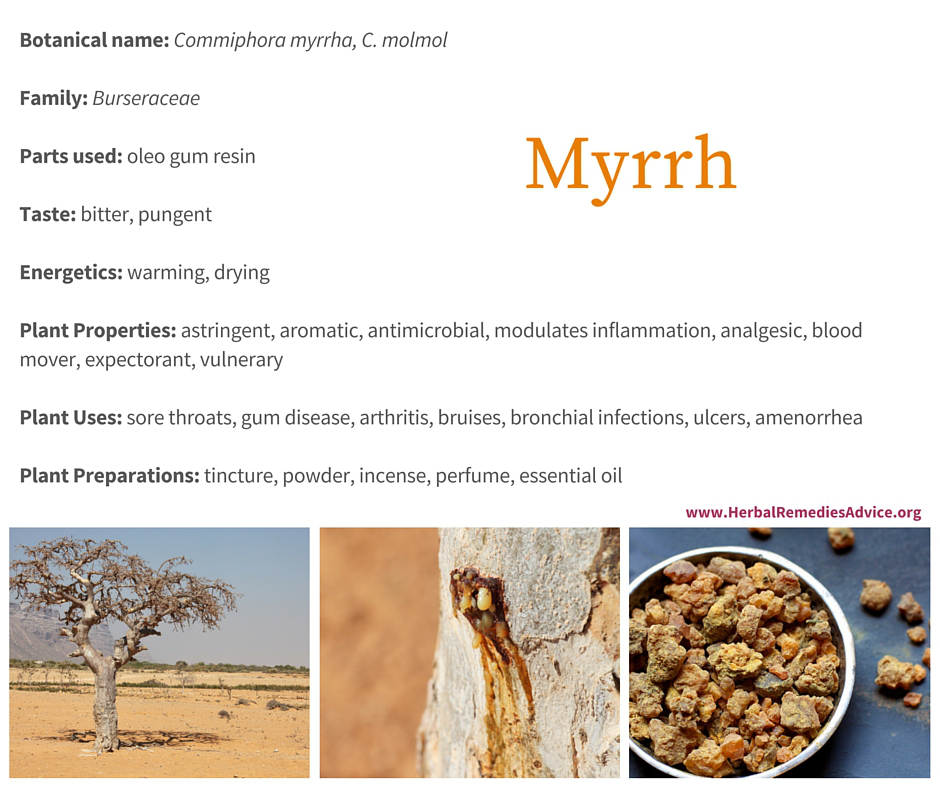 Myrrh is commonly used for a variety of problems with the mouth, including for increased gum health (e.g., against gingivitis) and mouth ulcers. It’s commonly used as an ingredient in tooth powders and mouth washes. Dioscorides (40 – 90 CE), author of De Materia Medica, even mentions myrrh diluted in wine as a myrrh mouthwash to strengthen teeth and gums.4

A clinical trial compared the difference of using an aloe gel, a myrrh gel, or a placebo on patients with recurring canker sores. The researchers concluded that “Aloe was superior in decreasing ulcer size, erythema, and exudation; whereas myrrh resulted in more pain reduction.”5

Myrrh has long been used to heal wounds, especially infected or gangrenous wounds. As we saw above, it is commonly used for mouth ulcers, but it is also relevant for skin ulcers and digestive lesions such as ulcerative colitis. In 2013, a randomized clinical trial found that a mixture of chamomile, myrrh, and coffee charcoal was just as effective as the pharmaceutical mesalazine in addressing ulcerative colitis symptoms.6

Other wounds that can benefit from myrrh’s healing qualities are boils, pimples, herpes outbreaks, and abrasions. Myrrh helps wounds to heal in several ways: it is antimicrobial, which can eliminate infection. It is also astringent, which helps to tighten and tone tissues, helping them to heal. It can also increase circulation to an area, thus helping your own body to bring important healing hormones and immune system cells to the area.

Many texts recommend the use of this beautiful-smelling resin on wounds that look putrid and smell foul.

In Traditional Chinese Medicine, myrrh is primarily seen as an herb that moves blood (circulation). It can move blood stagnation such as bruising or pelvic congestion and is commonly used in external preparations for bruising, contusions, arthritis, and other painful conditions. It is an ingredient in Kloss’ Liniment, a well-known preparation developed by Jethro Kloss, author of Back to Eden (1939). Kloss’ Liniment is recommended for sore muscles, bug bites, and boils.

All of the effects of Myrrha depend upon its ability to break up blood stagnation: it stops pain by removing obstruction to the flow of blood, which then suffuses affected tissues and stops pain; it reduces mobile and fixed abdominal masses by dispersing blood stasis; and it assists in the healing of injuries by eliminating obstruction from stasis that prevents nourishment and regeneration of the tissues.  - Chinese Herbal Medicine Materia Medica, 3rd Edition 7 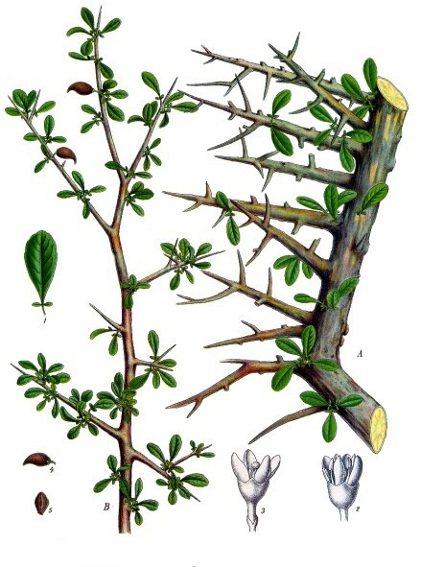 Myrrh has also long been recommended for a variety of pulmonary problems, including bronchitis and asthma. As always, keeping in mind myrrh’s energetics helps us to match it to the right symptoms. Weak lungs, difficulty expelling mucus, pale mucous membranes, and congestion are all signs indicating that myrrh would be helpful.

It slowly increases the fullness and force of the pulse, and exerts a well-marked influence on the capillary circulation. It diminishes mucous discharges, leaves a sense of warmth in the respiratory passages, arrests decomposition, and removes foul odors from sores.  - Wm. H. Cook, 1869, The Physio-Medical Dispensatory 8

The warming and bitter qualities of myrrh can help stimulate weak and cold digestion. (Note that small dosages only are recommended for this.) It has historically been used for a variety of intestinal parasite infections and an Egyptian clinical trial in 2004 showed that an extract of myrrh was effective against Schistosomiasis (a parasitic infection).9

Myrrh Uses as Incense and Perfume 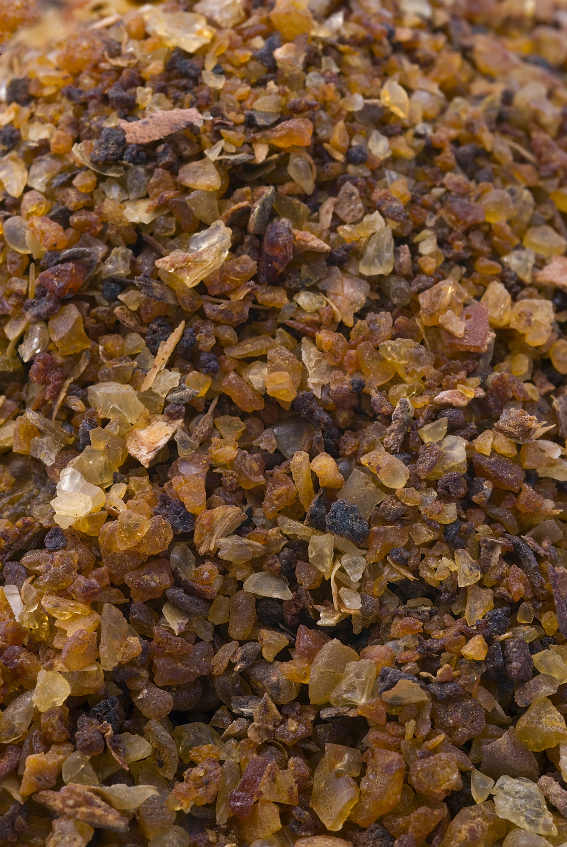 There are two species of Commiphora that are used interchangeably: Commiphora myrrha and C. molmol.

Myrrh is high in resins, making it best prepared as an alcohol extract (tincture: 1:5, 95% alcohol) or as a powder. External liniments (alcohol extractions) can also be used. Myrrh does not work well as a tea because the resins are not soluble in water.

For internal use, dosages should remain small; otherwise adverse effects such as gastric irritation may occur from the powerful resins.

Commiphora myrrha grows to about 13 feet (4m) and has many spines.

While the native range of myrrh trees is fairly small, all major systems of herbalism have adopted its use into their traditional medicine. While the Western world most appreciates it for its ability to heal wounds and address mouth health, Traditional Chinese Medicine uses it most to move blood. Even though these different systems have different uses, the fact that this oleo gum resin has infiltrated so many systems of medicine far beyond its native habitat says a lot about the respect people have for myrrh.

You can buy a variety of Myrrh preparations at Mountain Rose Herbs.