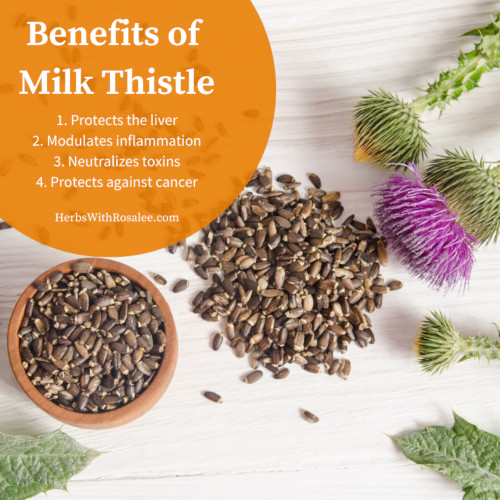 With its spiny leaves and bristly flowers, milk thistle defiantly defends itself against predators looking for an easy meal. And rightfully so, for it has a treasure to protect! Beneath that harsh exterior is a gold mine of seeds (technically fruits) that are renown for their ability to nourish and protect.

Milk thistle originally comes from southern Europe and North Africa to Asia, but has now spread across the world. It often grows in disturbed soils and is sometimes considered an invasive weed. For over 2,000 years, milk thistle has been relied upon for its ability to protect the liver. In more recent years it has been widely heralded as a life-saving substance for people with severe liver damage.

While some herbs have very specific indications and a definite energetic pattern, milk thistle is a neutral herb in taste, humidity and thermal indexes. We are lucky this protective plant works so well for so many!

Milk thistle is most famous for its ability to protect and nourish the liver. While this may seem to be a very specific action, because of all the extensive things your liver does, the implications are far reaching. For milk thistle there is no job too big or too small!

One mechanism of action is that milk thistle can increase glutathione in the liver.1 Glutathione is often referred to as the mother of antioxidants because of its regenerative nature.

A meta analysis showed that, when taken as a preventive therapy, milk thistle protected against liver damage caused by medicines for tuberculosis (this is a common adverse effects of those medications). It also revealed that milk thistle can improve liver function in the same population.2

Some research has shown that milk thistle can benefit people who have been diagnosed with both alcoholic and non-alcoholic fatty liver disease, although more studies are needed.3,4

Milk thistle is famously used to counteract the often fatal effects of eating poisonous mushrooms like Amanita phalloides, or death cap mushroom. This mushroom is responsible for most of the mushroom-related deaths around the world. One review reports, “Administration of silybin [a milk thistle extract] within approximately 48 hours after poisoning produced by the mushroom Amanita phalloides (death cap) seems to be an effective measure to prevent severe liver damage.”5

I like to combine milk thistle seed with dandelion root and turmeric root to create a simple liver tonic that heals, repairs, detoxifies and gently stimulates the liver.
Alan Tillotson
The One Earth Herbal Sourcebook 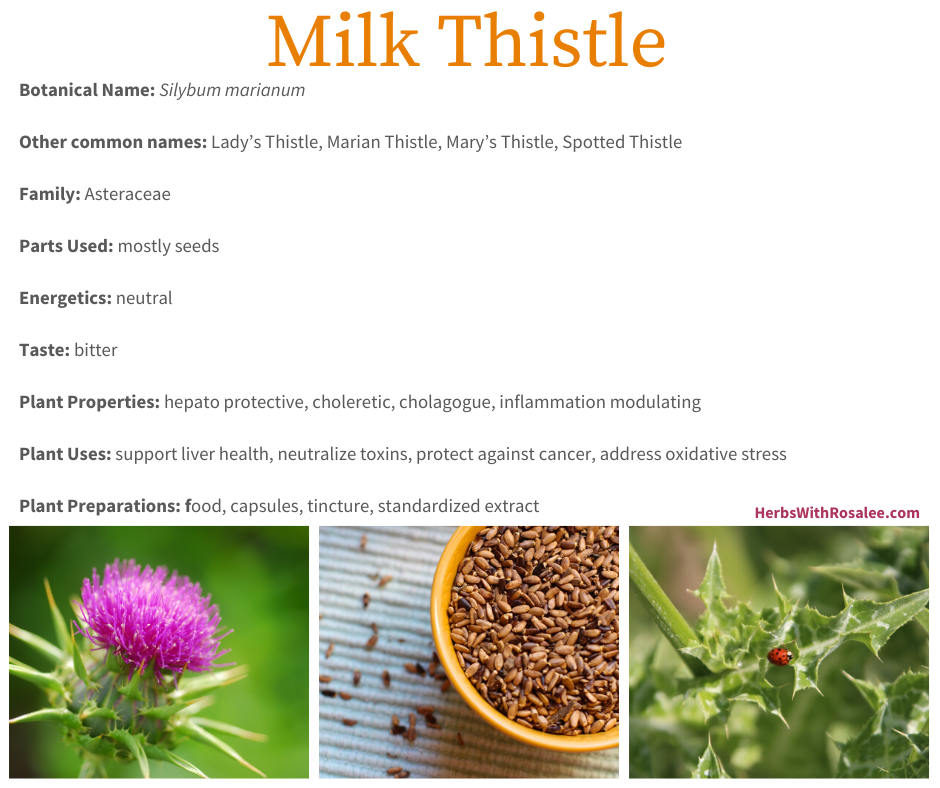 Milk thistle’s protective abilities extend beyond the liver and it has been shown to modulate inflammation to benefit a wide range of situations and illnesses.

For example, a study showed that a milk thistle extract given to patients diagnosed with rheumatoid arthritis significantly reduced their symptoms. The researchers say these results could be due to the anti-inflammatory and anti-oxidant properties within milk thistle.6

One recent study showed that men and women with type 2 diabetes who were given a milk thistle extract had a significant reduction in fasting blood sugar and serum insulin, and improved cholesterol levels as compared to those taking a placebo.7

Another study showed that people diagnosed with type 2 diabetes had a significant reduction in hs-CRP after taking a milk thistle extract for 45 days.8 (Elevated hs-CRP levels are strongly related to heart disease.)

Type 1 diabetes is an illness that requires insulin therapy. An interesting study showed how herbs can be a powerful adjunct therapy to patients with type 1 diabetes. In this study, patients were given an herbal formula containing Berberis aristata and milk thistle to take concurrently with their prescribed insulin. The results indicated that the herbal formula led to a reduction in the necessary insulin dose. In other words, patients could take less insulin and still have good blood sugar control.9

Milk thistle can even protect your skin. A study showed that a formulation including milk thistle extract could strongly benefit the skin by increasing elasticity and improving skin tone.10

[Milk thistle] is a good herb to consider for individuals who are or have been exposed to solvents and chemicals via lifestyle choices (drugs, alcohol) or their job (hairdressers, mechanics, factory workers).
Maria Noël Groves - Body Into Balance 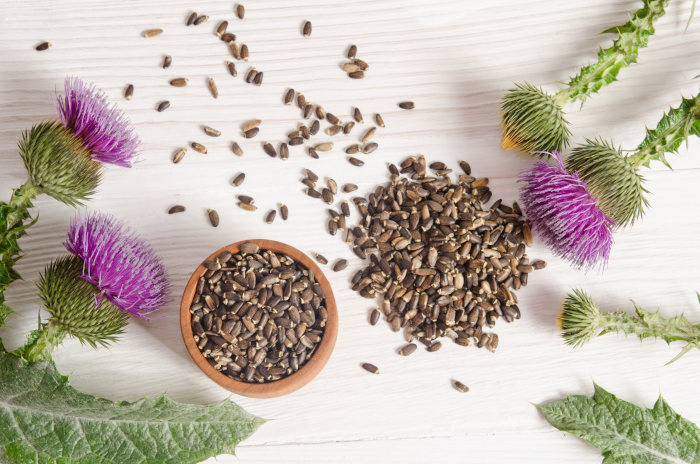 Radiation-induced dermatitis is a common side effect of radiotherapy performed on cancer patients. One study evaluated whether a milk thistle extract gel would help prevent radio-dermatitis in people diagnosed with breast cancer. Forty patients were either given the milk thistle gel or were given a placebo starting on the first day of radiotherapy for five weeks. After five weeks those using the milk thistle gel fared significantly better than those using the placebo.11

Another study showed that a milk thistle extract gel could prevent hand-foot syndrome, which is a common adverse reaction to a medication given to people with gastrointestinal cancer.12

And yet another study concluded that, “Prophylactic administration of conventional form of [milk thistle extract] tablets could significantly reduce the severity of radiotherapy induced mucositis and delay its occurrence in patients with head and neck cancer.”13 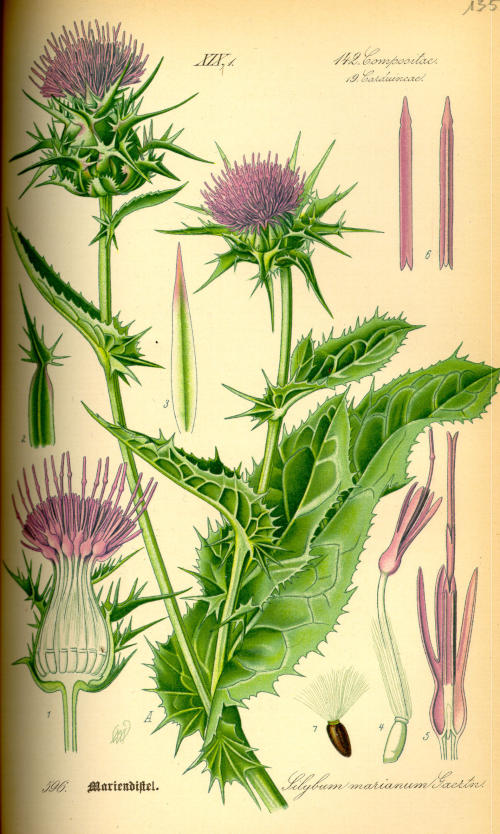 Milk thistle can be found growing in disturbed soils around the world. It can grow as either an annual or biennial herb, reaching 2-4 feet in height.

The leaves start as a basal rosette before growing up the stem. Mature leaves have many sharp spines and contain significant white veins or spots.

The purple flower heads are at the end of the stem and contain multiple individual flowers, as is common with the Aster family. The bracts are long recurved spines.

What we commonly call milk thistle seeds are technically fruits or achenes. These are somewhat oblong and flattened and are a grey to brownish color.

Herbalists often prefer to use the whole seed of milk thistle, freshly ground, and added to foods (I like it in yogurt and oatmeal). Water does not extract milk thistle well and alcohol is often contraindicated for those seeking liver protection.

Milk thistle is commonly sold as an isolated extract. Herbalist Kerry Bone explains that to make a milk thistle extract “Marker compounds known as flavanolignans are selectively extracted by using a sequence of solvents or by a column technology. The resultant concentration ratio is typically between 40:1 and 70:1. These flavanolignans are known by the collective name of "silymarin" and consist principally of silybin, silychristin and silydianin. Sometimes the standardized extract itself is called "silymarin." There is good pharmacological and clinical evidence to support the hepatoprotective activity of both the extract and silybin.”14