In ancient China, licorice was considered a principle drug among all drugs. It is perhaps the most commonly used herb in classical prescriptions. [The Shennong Herbal] states that licorice is used to balance the five viscera (organs) and six bowels. It also reports that licorice strengthens the sinews and bones, enhances muscle growth and strength, and is used topically to heal wounds.  - Winston and Maimes, Adaptogens

Licorice tea is a sweet demulcent that soothes mucous membranes.

If you only ever used licorice root for its demulcent qualities you would still find an amazing array of uses for it.

When I have a scratchy sore throat, licorice tea is often the first thing I reach for. The sweet taste and thick consistency of licorice root seems to magically erase dry and irritated sore throats. When I have a cold I’ll even keep licorice tea in a thermos on my bed stand to easily reach when I wake up dry and parched.

Besides soothing sore throats, licorice tea is famously used as a pectoral herb. It soothes coughs, especially those dry and irritating coughs that can keep you up all night. Since sore throats and coughs tend to come together this is a wonderful herb to reach for. Add to that its antiviral and antibacterial properties and you’ve got one heck of a useful herb for common upper respiratory infections. It has been used against both pneumonia and tuberculosis.

Licorice tea can also soothe mucous membranes further down the line. It is commonly used for all types of ulcers and other types of inflammation in the digestive tract. I commonly use it for people who have irritated bowels such as those diagnosed with IBS.

It can be specific for people who have constipation with dry and hard stools. The demulcent qualities of licorice root can soothe the irritated tissues and it is also gently stool loosening.

Liquorice root is emollient, demulcent, and nutritive. It acts upon mucous surfaces, lessening irritation, and is consequently useful in coughs, catarrhs, irritation of the urinary organs, and pain of the intestines in diarrhoea.
- King’s American Dispensatory, 1898 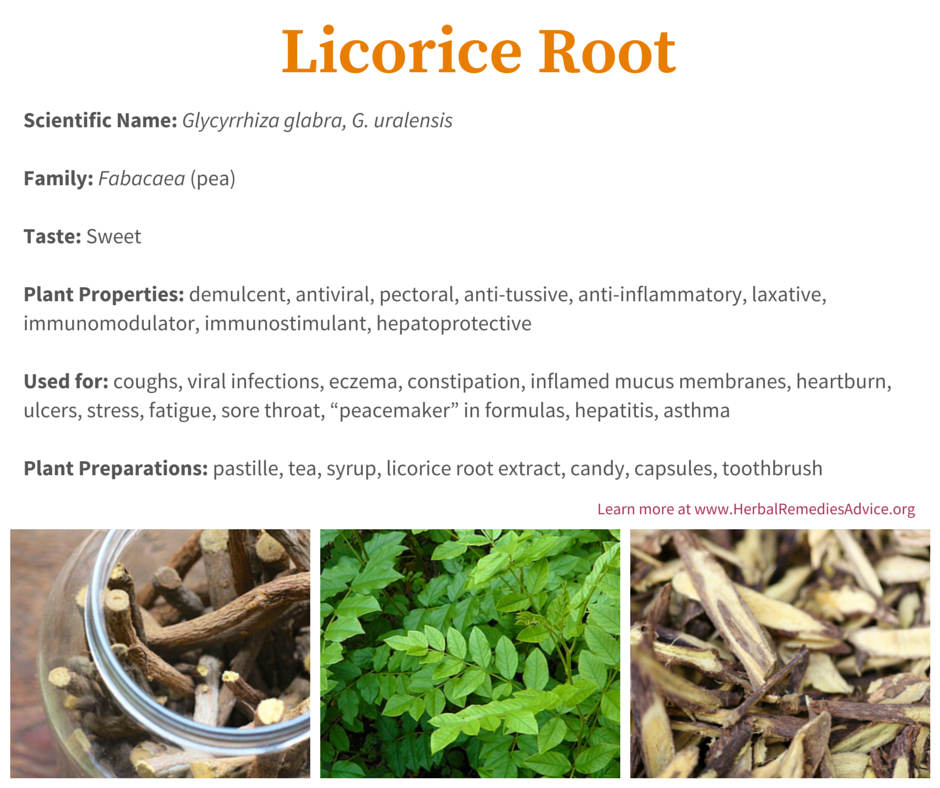 Licorice Root Benefits as an Antiviral and Antibacterial

Licorice root is a multifaceted antiviral herb that is used for a variety of viruses, including hepatitis, herpes, pneumonia and the common rhino virus (colds).

Licorice can be taken internally for viral infections and used externally on viral sores such as herpes lesions. Besides inhibiting viral replication, licorice also can stimulate the immune system response to more effectively kill viruses.

When using licorice for its antiviral properties the whole licorice root must be used, not deglycyrrhizinated licorice (DGL licorice).

Licorice root is also mildly antibacterial. It has been shown to be effective against helicobacter pylori and various bacteria commonly found in the mouth.

Learn how you can use a a licorice stick as a toothbrush here.

Licorice is broadly antiviral. It is active against a wide range of viruses through multiple mechanisms. It strongly inhibits the ability of many viruses to create the membrane pores through which the viruses then enter cells. This slows or even ends the viral infection right there. For other viruses, it is directly virucidal, and for others it stimulates the host immune system specifically to attack the invading virus.  - Steven Buhner, Herbal Antivirals

Licorice Root Benefits as an Adaptogen

Licorice root has adaptogen qualities and is specific for people with adrenal insufficiency and low cortisol levels. It spares cortisol by inhibiting its conversion to cortisone. It is commonly used in adaptogen formulas.

As an adaptogen, licorice benefits the HPA axis function and the sympathoadrenal system (SAS). I frequently use it for people with adrenal insufficiency who have symptoms of fatigue, tiredness upon waking up in the morning, elevated cortisol and blood sugar levels, and frequent colds.  - Winston and Maimes, Adaptogens

Licorice root can be used in a variety of ways. It is important to note that it is most often used in combination with other herbs and probably should not be used in large dosages for long periods of time (see the licorice side effects section for more information on licorice and high blood pressure).

Licorice Tea: Decoction of the roots or the powder mixed with water.

Deglycyrrhizinated Licorice Tablets or DGL licorice: This is a processed product that has the glycyrrhizin removed. It is commonly used for ulcers (see the licorice side effects section for more information).

Peacemaker: Many classical Chinese formulas contain small amounts (5%-10%) of licorice. The theory is that licorice increases the effectiveness of other herbs and gets them to “play together nicely,” thus being a peacemaker of herbs.

Toothbrush: Licorice sticks are a wonderful herb for healthy gums. See this article on how to use the whole root as a toothbrush.

Most of the licorice grown today is used as a tobacco flavoring agent.

Licorice is used in Ayurveda to improve eyesight, strength, sexual potency and libido. Licorice is considered, as adaptogens generally do, to enhance the effects of other herbs in a formula, so it is widely used.
- KP Khalsa. Culinary Herbalism Course

Licorice root has gotten some bad press and, in my opinion, licorice root side effects have been way overblown. For any herb it is best to know the details rather than label an herb as being bad or good or claiming that it always does such and such.

So what are the licorice side effects? What's the deal with licorice and high blood pressure?
Licorice root, especially when taken in large amounts for long periods of time, can increase blood pressure and cause water retention. Some people seem to be more susceptible to this than others.

To avoid this, here are some suggestions.

Take licorice root in smaller dosages and as part of a larger herbal formula.

Avoid taking more than 10 grams of licorice root per day for an extended period of time.

If you decide to take larger dosages of licorice, have your blood pressure checked regularly and discontinue use if you notice any unusual water retention in your body.

Avoid use of licorice root if you currently have high blood pressure and/or edema.

Interestingly, many of the case studies involving unwanted side effects of licorice happened in people consuming large amounts of licorice candy.

Licorice root is not recommended during pregnancy and its safety has not been established for lactation.

Licorice root is one of the most-used herbs of all time. Interesting that this designation goes to an herb that is so incredibly sweet! It can be used for a wide range of benefits, from addressing acute situations like a cold or flu to addressing chronic infections and inflammatory states. As long as you take care in using licorice, it is a powerful medicinal ally.