2020 has brought some particular challenges to the kava trade. Read this extensive article for a deeper appreciation of kava and where it comes from.

The awa [kava] custom is of interest in Hawaii because it was a sacred drink of importance in many phases of Hawaiian life. Outside of water and drinking coconut, no other drink was known.
Margaret TitcombKava in Hawaii

If you know me, then you know I love to discuss the taste of herbs. Some plants are easy to describe: the sweetness of licorice root, the bitter bite of dandelion leaves or salad greens. The flavor of kava, however, is not easily described in a word. Its flavor is complex. Once you taste kava, you’ll never forget it.

As a member of the Piperaceae, or black pepper, family, kava has a spicy and stimulating flavor reminiscent of its peppery cousins. It’s both warming and drying and has a distinct acridity that slightly numbs your tongue, mouth, and throat. While not entirely pleasant, most people accept this strange taste, especially after they feel the relaxing and often euphoric effects of kava.

Kava is a relaxing nervine whose benefits can be helpful in many different circumstances.

Throughout the Pacific Islands, preparations from kava are drunk before ceremonies or as a part of social gatherings.

Kava’s ability to relax the nervous system is also used to help people who are experiencing anxiety. A 2013 double-blind, randomized, placebo-controlled study showed that kava was significantly more effective at reducing anxiety than a placebo. Participants in the study who had more severe symptoms of anxiety had even better results with kava.2

Kava affects people differently. For some it is initially stimulating, creating space for conversation and social activities with calming effects felt later. For others, kava is immediately relaxing and can even promote sleep. When trying kava for the first time, or even a new strain or cultivar of kava, it’s helpful to start with a small amount to see how it affects you.

Kava isn’t simply for people with anxiety; it can also increase happiness and bring euphoria. A human clinical trial involving healthy volunteers showed that kava increases cheerfulness, especially in already cheerful people. The researchers concluded, “Thus, unlike conventional benzodiazepine-type anxiolytics, which tend to impair cognitive performance and to increase the occurrence of negative affective states, Kava is a potent anxiolytic agent, which, additionally, can facilitate cognitive functioning and can increase positive affectivity related to exhilaration.”3

Kava relaxes and opens your mind. It is considered to be mildly psychoactive; however, it is not addictive nor hallucinogenic.

Kava falls into a class uniquely its own. I know of no other herb like it (nothing I've ever come across could even remotely qualify as a "substitute" for kava), and consider it one of the nature's most exquisite gifts. Kava is, in my opinion, primarily suited to treating acute stress that settles into the musculature of the body. It is most effective when your mind is overwhelmed and your body is tightly strung from a crazy hectic day and that's what's making you unable to relax.
jim mcdonald - HerbCraft.org 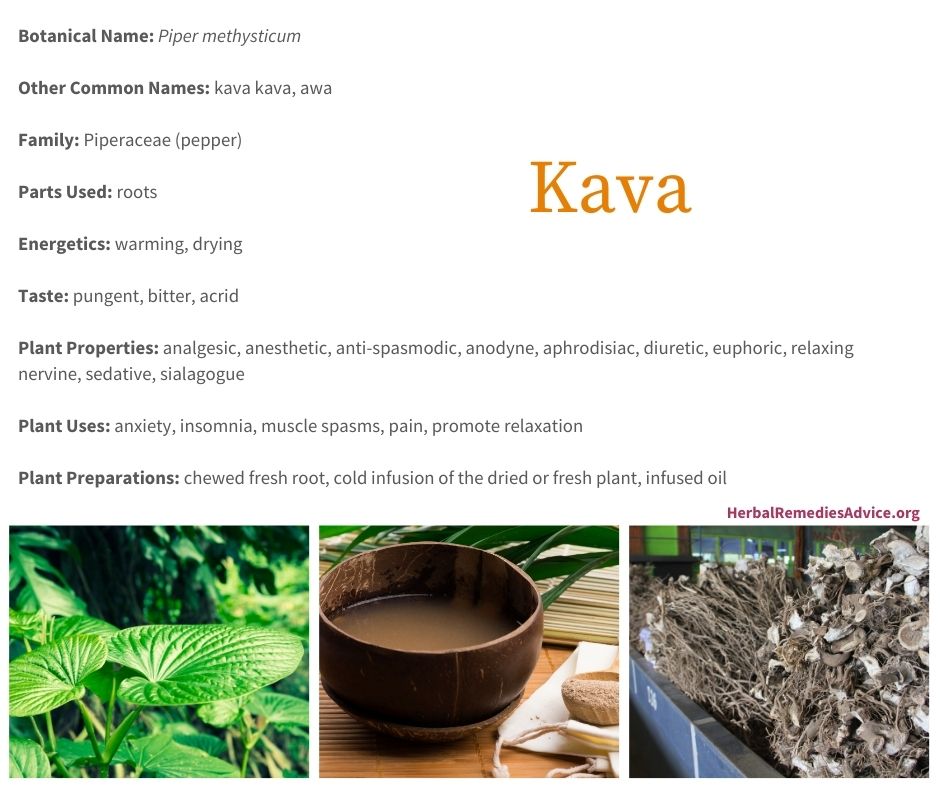 Kava can melt away muscular tension and decrease the pain associated with it. This can include chronically tight muscles or muscle spasms, including leg cramps, menstrual cramps, and tension headaches. Kava can also be used at night to still restless legs, although magnesium supplements usually are my first recommendation for restless leg syndrome.

While kava was traditionally prepared as a communal beverage and tea, many herbalists today are infusing it into oil for topical use on tense muscles.

Kava has also been used for spasmodic urinary pain, specifically for an overactive and irritable bladder, such as with overactive bladder (OAB) or interstitial cystitis (IC).

Drinking preparations of kava can numb your mouth and throat, so it has been used to relieve toothaches and sore throats.

Kava Effects as an Aphrodisiac

Kava is widely called an aphrodisiac, which unfortunately conjures up scenes of magical love potions that will sway someone to become instantly smitten with another person. That’s not kava.

Kava is spicy and stimulating, increasing circulation, which is an important aspect of interest in sex. If someone is not interested in sex due to anxiety or tense muscles, then kava can be used to encourage relaxation and openness.

As written above, kava does put some people to sleep. In this case, it won’t be the ideal aphrodisiac for that person.

Kava Effects as an Antifungal

It was through herbalist jim mcdonald that I first heard about kava’s antifungal properties. He writes that Eclectic Herbalist Finley Ellingwood recommended a dilute tincture of kava topically for itching of the vulva and anus. jim has since recommended it for itchiness associated with yeast infections with good results. He does warn that kava tincture applied locally to sensitive areas can hurt and that it should always be diluted.4

One study has confirmed that kava has antifungal properties.5

The low incidence of colon cancer among people in the South Pacific inspired researchers to look into the potential anti-cancer effects of kava. A resulting 2017 study showed that traditional preparations of kava inhibit breast and colon cancer cells in vitro.6 It will be interesting to see further research in this area.

In the early 2000s, there were several accounts of kava causing liver damage and its use was blamed on several liver transplants and even deaths.

Understandably these liver injuries raised a lot of concern as well as confusion. How could a plant that has been safely used for thousands of years suddenly be dangerous? While the plant was initially condemned and its use was restricted or banned by several countries, it is now understood that the type of kava and how you use kava all play a role in its safety.

Is Kava Safe?: What Type of Kava to Use

Wild kava (P. wichmannii) was domesticated many years ago. The kava that is used today comes from a variety of sterile cultivars created by breeders from this original species. (This is similar to the many cultivars of cayenne peppers, tomatoes, or cannabis, for example.)

The best types of kava to use are the “noble” varieties. These varieties are what have been used traditionally for thousands of years and they have the ideal types and amounts of medicinal constituents.

The noble varieties of kava are cultivated via stem cuttings as the cultivars are mostly infertile. The roots take four to five years to mature. This makes them a time-intensive plant to grow.

Other varieties of kava are classified as tudei or tuday (“two-day”) cultivars. Tudei varieties have longer-lasting euphoric effects than the noble varieties and have gained notoriety because of it. However, those longer-lasting effects can also cause headaches and general sluggishness, otherwise known as kava hangovers. In some places, the sale and exportation of tudei kava is banned, but you can still find it on the market. While tudei kava hasn’t been shown to be outright dangerous, it makes sense to stick to the noble varieties that were traditionally used and have better records of safety.

Is Kava Safe? What Part to Use

Another possible, and perhaps more likely, culprit in the kava liver injuries may have come from people ingesting the leaves and stems of the plant, which have different chemical constituents shown to cause liver damage.

Because demand for kava outpaced supply, farmers and those creating kava products thought it would be cheaper to throw in some aerial parts of kava in addition to the roots. It was later shown that the stems and leaves of kava are potentially toxic and the roots are the only safe part to consume.

Is Kava Safe? How to Prepare Kava

Kava was traditionally either chewed while fresh, made into a water-based drink, or both. With the interest in kava growing, manufacturing companies raced to create concentrated extracts from kava which differed greatly from traditional use. Even alcohol extracts are now not considered to be an ideal preparation.

The safest way to enjoy kava is by chewing the fresh root or making a tea from the fresh or dried roots or root powder.

Another culprit in the liver injuries could have been improperly dried and stored kava that contained mold or other harmful microbes.

We know from many centuries of use that kava is safe; however, it’s important to use it correctly. Here’s a summary of kava safety tips.

Kava (Piper methysticum) is in the same family and genus as black pepper (Piper nigrum). The botanical name of kava — Piper methysticum — translates as “intoxicating pepper.”

There are many different cultivars (varieties) of kava, each with its own identifying characteristics and properties. The following is a general description for kava.

Kava grows as a shrub or small tree and can reach one to five meters tall. It prefers loose, well-drained soils that receive ample amounts of rainfall. It grows in warm, tropical locales with relatively high humidity. As an understory plant, it doesn’t like a lot of direct sunlight.

The leaves are dark green, heart shaped, and alternate along the plant’s stem.

Kava varieties bred by humans for medicinal uses are sterile. They rarely have flowers and don’t produce fruit/seeds. Instead, kava is propagated from stem cuttings.

The roots, including the root stumps, are ideally harvested when the plant is four to five years old.

Herbalist jim mcdonald explains, “Kava’s root consists of the lateral root and stump. The lateral roots are stronger, but much more spicy/acrid. Stumps are gentler in both flavor and effect. Really informative kava vendors will list their root to stump ratio.”7

For thousands of years, people have been traditionally preparing kava using simple methods such as chewing the fresh root or drinking a tea made from the fresh or dried root. Methods vary depending on the region or island.

More recent kava preparations of standardized and alcohol extracts have been under scrutiny for their possible safety concerns. Most of the liver injuries that have been associated with kava come from standardized extracts, not from traditional preparations.

With that understanding, it makes sense to stick with the traditional kava preparation methods.

Kava can have strong and inconsistent effects. Every time you take a new kava preparation, start with a small amount to first determine how it is affecting you. It’s recommended to wait 15 minutes in between cups of kava to get a feel for its effects. Fresh preparations of kava are more potent than dried.

Kava can also be infused into a carrier oil for topical use on tense muscles.

Strict dosages for kava don’t exist, but a bit of common sense can go a long way. If you suddenly find yourself drinking cup after cup of kava, you’re probably taking too much. Herbalist David Winston doesn’t recommend taking it for more than four to six weeks at a time without a break. It was traditionally used for special gatherings or ceremonies, so it was not considered to be an everyday beverage.

Rosalee is an herbalist and author of the bestselling book Alchemy of Herbs: Transform Everyday Ingredients Into Foods & Remedies That Heal. She's a registered herbalist with the American Herbalist Guild and the Education Director for LearningHerbs. Read about how Rosalee went from having a terminal illness to being a bestselling author in her full story here.

Information found on this website is meant for educational purposes only.
It is not meant to diagnose medical conditions, to treat any medical conditions or to prescribe medicine.
Copyright 2010-2020 www.HerbalRemediesAdvice.org by Rosalee de la Forêt
Affiliate Disclaimer