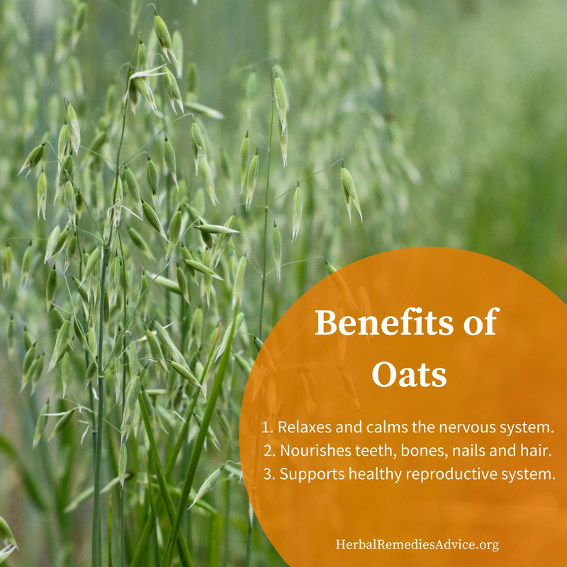 Oats offer us deep nourishment as a sustaining cereal grain and as a replenishing medicine for the nervous system. A member of the grass family, oats are believed to have originated in the Fertile Crescent, although the first signs of domestication appear in Bronze Age Europe. Today oats are a common cereal grain – the third most-consumed grain in the U.S. - although most of the oats grown are used as livestock feed for horses, cows, and chickens.

Herbalists use oats as medicine in various stages of the plant as well as in different preparations. I’m often asked if dried oats have the same benefits as milky oats or even as oatmeal. The short answer is that they are not entirely interchangeable. The longer answer is addressed in this article.

Milky oats refers to the immature oat seed heads when they are in the juicy (“milky”) stage. This is a fleeting stage of growth so, in order to catch it, you will need to visit the plant daily as the seed heads mature. When you squeeze the seed and a milky substance appears, this is the milky stage. Herbalists harvest these seeds (not the stalks) and immediately extract them with alcohol to preserve that milky essence. (For a more thorough description of this process, see the “How to Use Oats” section of this article.)

Sometimes you will see dried immature seed heads sold as “milky oats,” but this is technically incorrect and confusing, as the dried oatstraw is used very differently than the fresh alcohol extract.

A fresh milky oats alcohol extract is a soothing restorative to the nervous system. Herbalists often describe “milky oats people” as those whose nervous systems are “fried” or “crispy.” Think of milky oats tincture for people who have been “going, going, going” for far too long. “Type A burnout” is another excellent specific indication. A person who may benefit from milky oats might describe themselves as depleted or drained. David Winston describes them as someone who is emotionally brittle due to chronic stress and recommends using milky oats alongside adaptogens.

A common theme in many herbalists’ specific indications for this plant is an accompanying dryness associated with nervous system depletion. Common adjectives include brittle, fried, burnt, crispy, and dried up. Dry skin or mucus membranes may accompany this stressful state of depletion.

Eclectic herbalists also used it for heart weakness that was directly associated with nervous system debility. It was commonly recommended for healing after typhoid fever.

Eclectic herbalists had differing opinions on whether or not it was beneficial for people going through addiction withdrawal. Today, many herbalists use it for support for those who are quitting smoking.

It seemingly acts well in the exhaustion following typhoid and other low fevers and is thought to hasten convalescence, particularly where there is much nervous involvement and enfeebled action of the heart.
- Harvey Wickes Felter, The Eclectic Materia Medica 2

Oats, in their many different forms, have also long been associated with reproductive and sexual health. As in the case of cardiac weakness, this benefit may also be due to nervous system support and moistening effect rather than a direct action on the reproductive system. Eclectic herbalists used it for spermatorrhea and many herbalists use it for a low libido for all genders.

There have been a handful of studies using various forms of fresh oat seed extracts. So far, promising results have been seen for improving cognition, treating acne, and supporting cardiovascular health.4,5,6,7 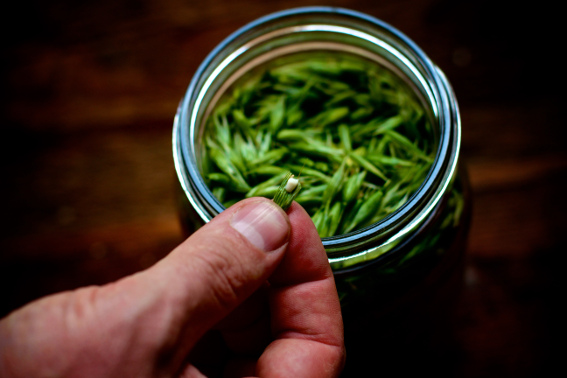 When you squeeze the seed the milky substance appears

Dried oatstraw is another favorite form of oats that is used for the nervous system and for reproductive health but is considered to have a different avenue of benefits.

Oatstraw that is harvested to be dried can be harvested at any stage of plant growth (including during the “milky” stage) but this time the entire stalk, including the seed heads, is harvested and then dried. This green and fibrous material is rich in minerals, especially those that are important for the nervous system, as well as the integumentary system (hair, bones, teeth, nails). According to Nutritional Herbology by Mark Pedersen, dried oatstraw is high in calcium, magnesium, chromium, niacin, and silicon.8

The best way to extract these minerals is by decoction: simmering a generous portion in water for 20 minutes or longer. A typical dosage is 1 ounce of the herb (28 grams) simmered in 1 quart of water.

I’ve spoken to countless people who attribute their stronger hair, nails, and teeth to oatstraw. This type of preparation is commonly used for osteopenia.

Taken over time, oatstraw is also nourishing to the nervous system.

Both preparations support nervous system health, although they accomplish this in different ways.

Milky oats has a more immediate effect and is considered more specific to people who are going through acute nervous exhaustion. The effects of milky oats are felt shortly after regular dosing, usually within a few days or a week. An alcohol extract of fresh milky oats does not contain a lot of minerals and would not be used to support integumentary health.

Dried oatstraw, when prepared as a decoction, is rich in minerals that support both long term nervous system health as well as help to strengthen bones, hair, teeth, and nails. The best results are found through using it for several months to several years.

Both preparations are widely used to support reproductive and sexual health. 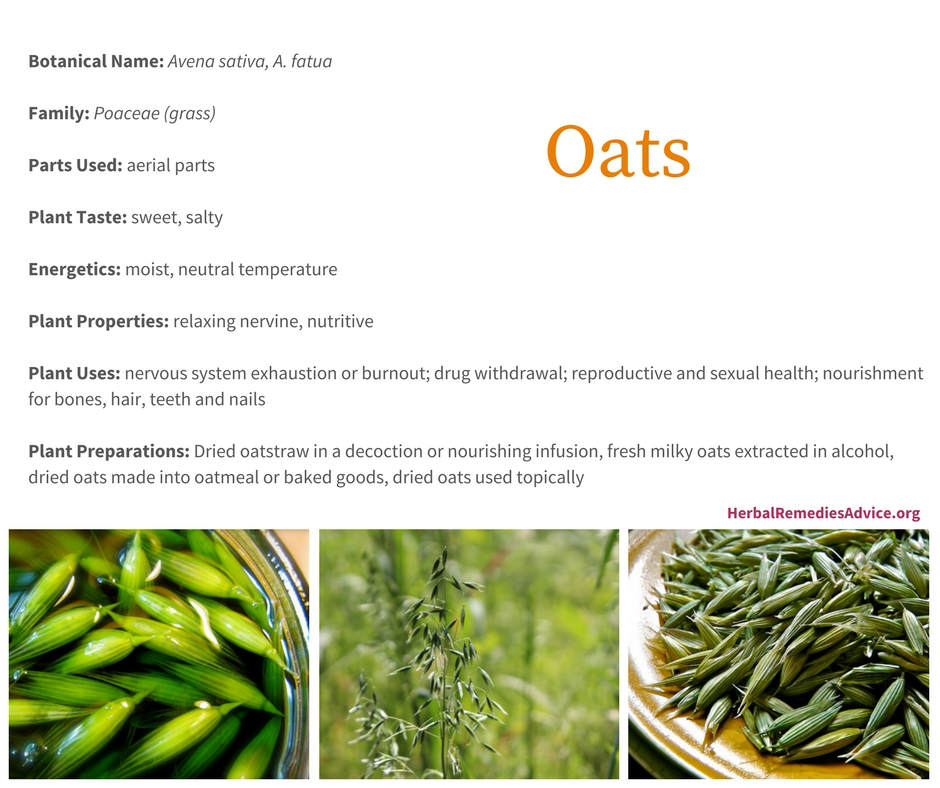 Most people are already familiar with oats as a common cereal grain. European folklore has a long tradition of uses for oats as a nourishing food for those who are debilitated, weak, or healing from a long illness.

When prepared as a gruel, oatmeal is also wonderfully demulcent, or “gooey.” Using oats and oatmeal topically to soothe inflamed and sensitive skin conditions is still common today.

Oats are also recommended as a soothing food for those with digestive troubles ranging from constipation to diarrhea to ulcers (although they are sometimes contraindicated for those with celiac disease).

Oats are considered a good source of soluble fiber, fat, and protein.

Health Benefits of Oats: How to Use Oats

As previously discussed, the preparation of different oats medicine is specific to the stage of the plant as well as whether it is fresh or dry.

When making a fresh milky oats extract, it is recommended to extract it as quickly as possible after harvesting. The weight of the fresh milky oats makes a 1:2 extraction very easy. One tip I learned from jim mcdonald is to measure out the herbs and alcohol (or use the folk method) and puree it in a blender. This helps to fully combine the milky essence with the alcohol. When straining you want to remove the fibrous herb, but you want that thick layer of the “milky” substance to remain. This will settle so be sure to shake the tincture well before using each time.

“If administered in hot water during the day, its action is much quicker, and in cold water at night on retiring it has a more extended influence. When given in hot water, its action at times, is almost instantaneous.”9

The dried oatstraw is best when simmered for at least 20 minutes. This is believed to extract more of the silicon and other minerals than a simple hot water infusion.

Suggested Dosage for the Health Benefits of Oats 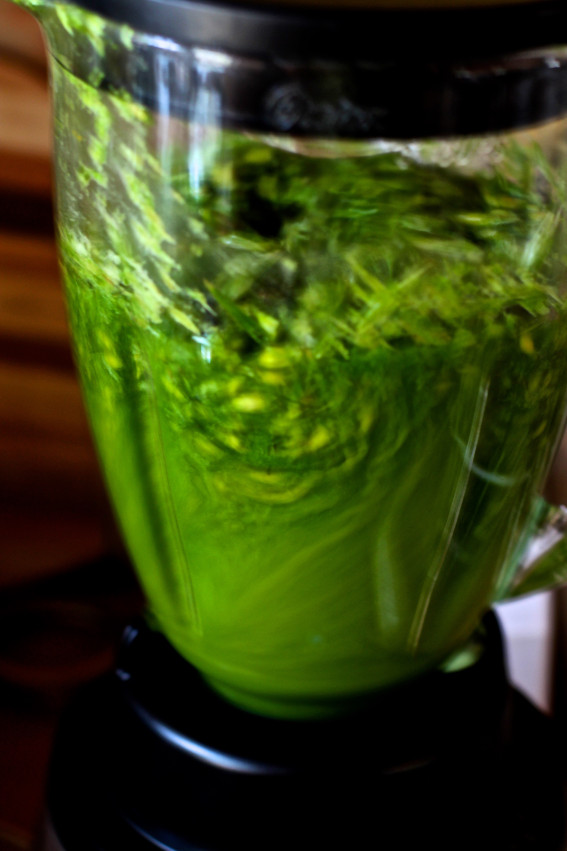 Milky Oats in the Blender

Oat is a member of the grass family.

It grows as long, light green stalks that are hollow. Oat plants may be 1 to 4 feet in height.

The flowers grow as nodding panicles of spikelets, where the flowers (followed by the seeds) dangle from a tall branched stem.

Citations for Health Benefits of Oats