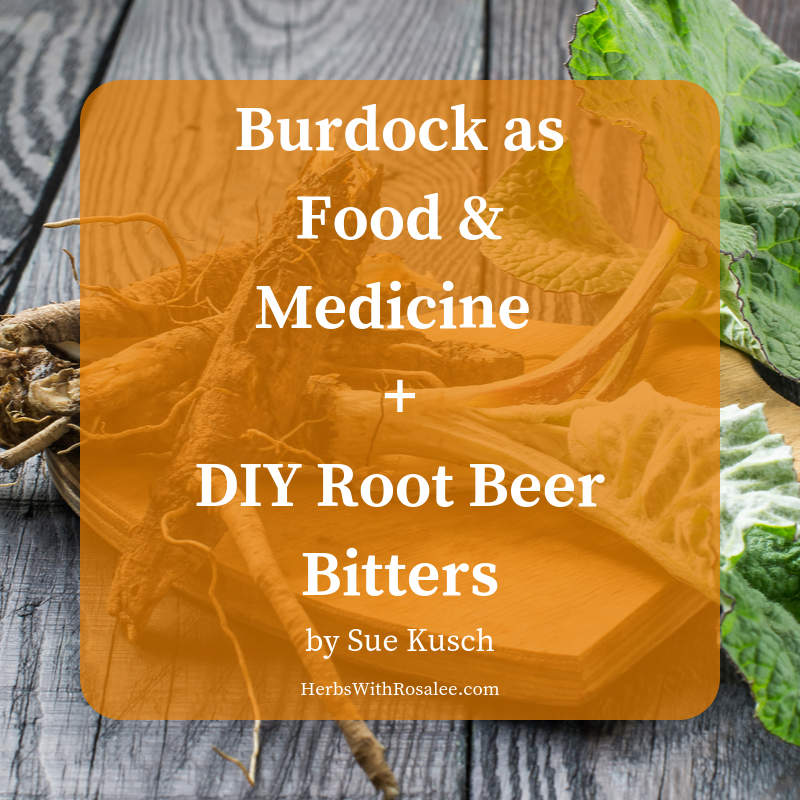 Recently, I visited the largest grocery store in my area and asked the produce manager if the store ever carried fresh burdock root. He was silent for a moment and then said, “What kind of root?” I repeated my request and he told me he had never heard of it.

Though I live in a semi-rural region, the population includes a large population of families with Japanese ancestry as well as a community of health-conscious residents so I was a bit surprised that he hadn’t heard of it.

He asked a few questions about burdock and, when I mentioned that it is cultivated but also grows as a weed in many areas, he mostly dismissed my request because “the store does not really sell weeds.” So the lesson learned is to never use the word weed when asking about unusual produce.

On my drive home, I smiled as I thought about my fresh burdock request, a bit thankful that I didn’t have to explain why I wanted it. Food shopping is a highly personal experience, with an array of factors that influence what we purchase.

Until the last few years, I don’t recall ever shopping for a fruit, vegetable, dairy product or herb because it specifically supported my liver’s health, reduced inflammation, or improved my gut flora. The concept of “food as medicine” is a traditional one that disappeared in modern cultures. Instead, food marketing - a multi-billion-dollar industry -  sells us deliciousness as the primary reason to eat.

A newer perspective is “food as fuel” and corporations promote eating specific foods that will support your productivity and efficiency.1  The food-as-medicine approach is building momentum in western culture, especially as we learn more about the importance of food in resisting chronic diseases.

You may already be employing some food-as-medicine strategies: “live” yogurt for probiotic benefits, garlic and mushrooms for immune system health, and berries for cardiovascular wellness. It is my study of herbalism that led me to healthier eating, introducing new plants into my eating choices because they offered both nourishment and medicinal benefits specific to health conditions and body systems. Taking an hour or two each week to learn more about the medicinal benefits of a plant is the next step to fully understanding how food works as medicine.

Burdock (Articum lappa) is a great example of a little known medicinal food plant in Western cultures that has a long history of culinary and medicinal use in both China and Japan.

Considered an invasive weed in many regions of the northern latitudes throughout the world, the stout 8 feet tall burdock experienced its fifteen minutes of fame several years ago when it was shared that it had influenced a classic example of biomimicry: the burrs that distribute the seeds by clinging to animals and humans after an encounter inspired the invention of the hook and loop fastener, commercially known as Velcro®.

The large tropical-looking leaves are bitter and not generally eaten. The hollow leaf stalks are considered edible, tasting similar to asparagus.

The seeds and roots of this biennial are used medicinally, and the 2-3 foot long taproot is both wildcrafted and cultivated as food.

Harvesting a wild-grown, first-year root requires patience, determination, time and a digging spade or fork! It also makes you appreciate why the plant is cultivated in deep beds of loose, loamy soil.

One way to grow and harvest your own burdock root is to build a raised bed out of cinder blocks at least 2 feet tall and fill with soil, sow the seed in early spring and then, in the fall of the same year, remove the cinder blocks and soil and pluck out the root.

If you aren’t inclined to wildcraft or grow burdock, the good news is you can find fresh roots in Asian specialty markets and natural food stores. Cultivation does change the flavor a bit, reducing some of the bitter taste and herbalists believe it is not as strong medicinally as wildcrafted roots. 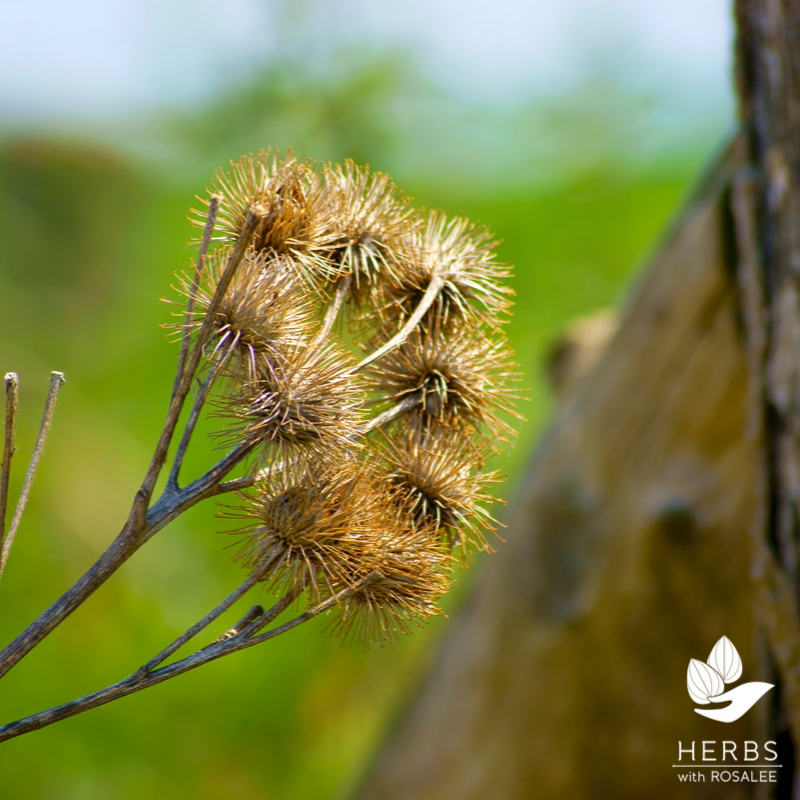 Burdock Uses as a Medicinal

Burdock’s history as a Western medicinal herb includes using the leaves as an anti-microbial and anti-inflammatory poultice or wash for skin eruptions, burns and for sprains and bruises. Burdock has been used traditionally as a remedy for all skin complaints, including simple rashes, eczema, psoriasis and acne.

To support these functions, burdock is considered a gentle tonic herb, and should be eaten and/or drunk as tea on a regular basis. The root contains a high amount of inulin, which is a soluble fiber and can support a healthy gut biome and improve blood sugar levels.

Burdock Uses in the Kitchen

As a fresh vegetable root, burdock can be used much like a carrot. Sliced or chopped, it can be pickled or added to soups, stews, root salads and stir fries, including the traditional Japanese dish, Kinpira Gobo. Burdock is called gobo in Japan, and kinpira is a Japanese cooking technique that consists of “saute and simmer.” Many Japanese recipes recommend peeling the root and soaking it in cold water for 30 minutes to reduce the bitter taste.

But herbalists sigh collectively at the notion of reducing the bitter taste, which serves as an ignitor of the digestive process, and recommend cleaning the root but avoid peeling it.

Well-known vegetarian chef and cookbook author, Deborah Madison, also clarifies that much of the flavor is in the skin of the burdock. Its earthy taste can be toned down a bit by soaking the chopped raw pieces in cold water.2 Looking for a sweet snack? Try candied burdock, a historical culinary tradition noted by Grieve.3

Europeans forage burdock root and other wild plants to make “hedgerow” fermented beverages like mead, beer and wine. Dried burdock root is often combined with dandelion root and drunk as a hot tea. I discovered burdock root when I explored a variety of traditional root beer recipes. One day, while mixing a new recipe I found for root beer tea, I accidentally grabbed a jar of gentian root, and my recipe for root beer bitters was born. 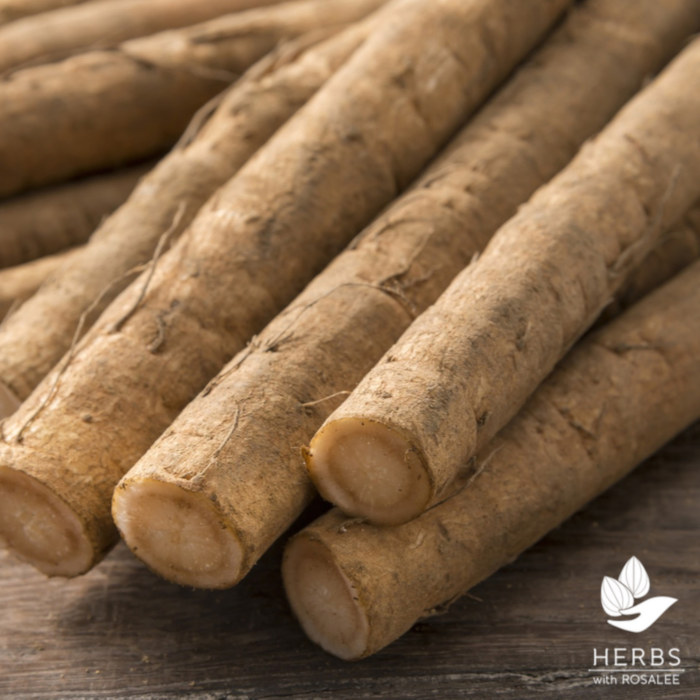 Over the past few years, I have been experimenting with making bitters blends. The bitter taste is an important one for our digestion process because it revs up the digestive enzymes, which keeps the digestion process running smoothly and efficiently. Serving bitter greens before or with a meal is one traditional method of initiating the digestive process. I am not a big fan of bitter greens so I keep my liquid bitters blend in a dropper bottle on my kitchen counter. Before each meal, I squirt a dropperful into my mouth and immediately feel its effects: my saliva production increases, preparing my digestive tract for the feast coming its way.

1 teaspoon each of the following dried and chopped herbs:

½ teaspoon each of the following dried and chopped herbs:

(NOTE: Safrole oil is a compound found in sassafras root bark that contributes to the unique taste of traditional root beer recipes. In 1960 the FDA banned food additives that contained safrole because tests indicated that mice developed liver cancer when injected with large amounts of safrole oil. Many herbalists today still use whole sassafras root bark. You can omit it from this recipe if desired.)

Add all plant material to a lidded jar. Add alcohol and cover with lid. Let steep for 2-4 weeks in dark place in your kitchen. Shake it now and then.

Add water to cover, cover with a lid, and simmer for 15 minutes.

Remove from heat and stir in molasses. Be frugal with the molasses; too much will overpower the herb taste.

Add to alcohol infusion and strain through cheesecloth. Pour into bottle.

There will be sediment from the roots that may settle or float. To remove, strain several more times through cheesecloth.